I had high aspirations for getting this viewing guide out from Las Vegas. In my head, it went something like sitting by a pool, wireless, sipping a frosty beverage and writing the bestest viewing guide EVAR. Unfortunately, the wicked beast that is Las Vegas grabbed me thoroughly by the haunches, shaking me violently and repeatedly until thoroughly concussed, broke, and somehow plagued with a persisting case of mild nausea. So, unfortunately, this guide is a bit late. And most likely less robust than in the past. I hocked my sense of humor in Vegas for $50 and 2 McDonald's double cheeseburgers. Apologies, all.

#17 Miami at Pittsburgh (ESPN) - So this game happened last night, obviously, and I enjoyed looking at the stat lines of the powerful juggernaut of Fail that is the Wannstache. This guy is such an inept goon. At one point around halftime, Pitt's Quarterback was 2-7 for 1 yard. Ricky Williams had a higher quarterback and career completion percentage than that guy. This game should have been an unmitigated blowout if it weren't for Jacory Harris' blatant efforts to keep the game within the spread. I'm fresh home from Vegas, I can smell the funk of gambling collusion from a thousand yards, and that motherfucker takes money to tank games. Or he's mentally deficient in the manner of an engine block. What's better, to be corrupt or just fucking stupid? 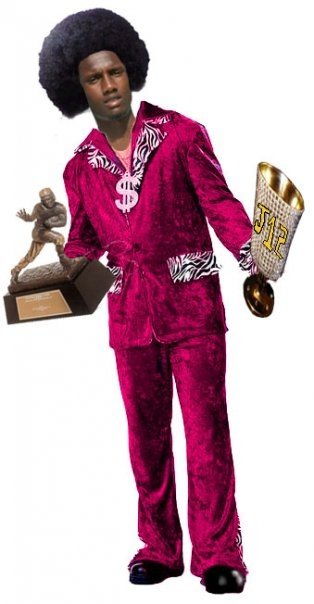 Got Reggie's at a Discount. What? Threads were a gift, man!

#4 TCU at SMU (ESPN) - As far as Friday night games go, I think that this one is pretty stout. I haven't really spent any time watching SMU this year, there's just the general feeling that they're improved and bordering on respectable. This game against a great TCU school could show us a lot of what June Jones has been doing the past couple years. There is a more prescient analysis to be made of both teams here, but to be thoroughly honest I've already lost interest in writing about this game. But it should be interesting, I swear! I expect SMU to hang tough for a couple quarters.

Nothing. This morning slate of games is empty of anything even remotely interesting. The only thing currently more devoid of value is my checking account balance.

UCLA at #7 Texas (ABC) - Ah, Texas. Well, as has been espoused by many of the great minds working today at this here Barking Carnival, last week's trip to Lubbock cast sunlight on even of the most ostrich behaving members of the UT fanbase. Namely the truth that our offense is a 20 car pile-up. Still, beating up on Cougar High aside, we know with the certainty of Newtonian physics and Dallas area pretension that UCLA dines 24/7 at a dick buffet. They're horrible. And after last week's gambit of apologizing to his own fans seems to have worked, Slickity Rick Neuheisel has apparently scheduled a national press conference this week to apologize for...everything. His PR agent has drafted a potential list of transgressions for which he might bawl and sniffle about including, but not limited to: irritable bowel syndrome, Enron, Affliction attire, both the earthquakes in Chile and Haiti, and Sky Captain and the World of Tomorrow. Logic dictates that certainly one of those will do the trick, and we all know that Rick Neuheisel has a thing for trends. Game Analysis? Not today. 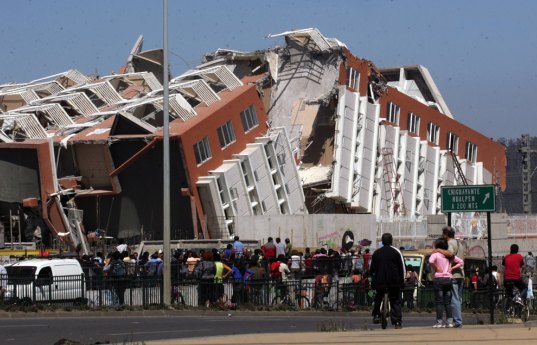 Rick's really sorry. He really only meant to split aces.

#1 Alabama at #10 Arkansas - (CBS) - Game of the day, without a doubt. Arkansas feels like the team with the best shot of upending Alabama this year, although I'm not entirely certain why at this point. They hardly seemed impressive beating up on a mediocre Georgia team last week, although it's hard to tell if they just mailed it in for large stretches or they're not that good themselves. My gut tells me they're somewhere in the middle. Still, the potential to beat 'Bama is there. Who else is going to do it in the SEC this year? Florida looks mortal. What, is Les Miles is going to step it up? Stop, it I'm not ready to laugh yet. Unless Arkansas is looking ahead to aTm. No, seriously, I'm not ready to laugh yet.

#19 Stanford at Notre Dame (NBC) - The operative question right now is not really whether or not Notre Dame can beat Stanford. They can't. Or even how they're going to slow down Andrew Luck with a defense that has the rigidity of warm noodle salad. The real question is whether or not Brian Kelly can fit an entire football in his mouth.

#13 South Carolina at #16 Auburn - (ESPN - 6:45) - Two teams that seem relatively evenly matched...like 80% of the SEC this year. You could put Mississippi State, Auburn, Georgia, and Ole' Miss. (if they replaced Houston Nutt with a pregnant donkey) in a hat and shake them up. Then you'd have a hat full of frosted Meh. But I mean, I'll like watch it and stuff.

#25 Oregon at #3 Boise State (ABC) - This is the last chance for anyone to derail Boise State and their potential run to a BCS title game. After Oregon St., the only hurdles they have left are complacency and any act of God. Oregon State still has talent on the field, though, so this game is hardly a gimme, but it's a crying shame the game isn't in Corvalis.

#21 West Virginia at #15 LSU (ESPN2) - This is it. This is finally the week it all comes crashing down on LSU. I can feel it the way Luke Skywalker can feel the Force or Lindsey Lohan can sense cocaine. Like everyone else they have faced this year, LSU will have much more talent on the field than WVU, but that hasn't stopped Les Miles from keeping games obnoxiously close up till now. And I hardly expect anything to change this week either. I have a vision in my head of Noel Devine simply running around in circles until the LSU defenders fall over dizzy. Or Les Miles running around in circles for no good reason whatsoever. The last situation actually seems plausible. The only thing that can stop Noel Devine is an empty whisky bottle to the head. So keep your helmet on, Noel. Baton Rouge is a dangerous place. 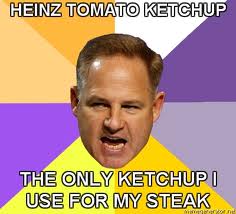 You should have seen the meme Sailor censored

Cal at #14Arizona (ABC of FSN?) I don't feel like looking up the channel on which this game is being broadcast. Cal thus far this season has been uneven at best. Actually, that's not really a fair statement. A fair statement would be that they look like sweaty ballsac wrapped in liquefied suck all year. Arizona is moving up the charts, and looking more and more like the best Stoops team to be fielded this season. As if I really give a crap about anything Stoops related. Those swine are walking and talking well poisoners of the human gene pool.

What'd I miss? Other than my spelling and grammatical errors. Those are given.