Death To The BCS

Share All sharing options for: Death To The BCS

As a college football fan who isn't a fucking tosser from Missouri, I wish we had a playoff.

I tend to sit my ass on a couch during the first weekend of March Madness in a state of glazed glee watching heavily tattooed lycanthropic Irish wookies named Lucas O’Rear slay giants.

Yes, I realize the dynamics of football are vastly different than hoops but still, come on! Shouldn't we let the guys get out there and see who wins on the field? Like Irish Hurling. If you have missed this, check it out.

Bowl Games? Who gives a shit? Who cares that Tim Tebow broke Vince Young's total yardage record or scoring or whatever it was vs. Cincinnati?

Wait, I do. VY did it in the best college football game of all time and Tim did it vs. an emasculated rust belt coalition whose head coach had rushed off to South Bend and I blame the BCS for this travesty!

The point is, Dan Wetzel who held Reggie Bush and USC's feet to the fire when nobody else would, and his compañeros have put together a book detailing how this current system is a cesspool of corruption and generally sucks out loud.

Please, buy it: DEATH TO THE BCS

Like Oprah, Barking Carnival makes publishing markets! We'll have Wetzel on the podcast. Jonathan Franzen, not so much.

As Dan Wolken says, Book it — The BCS bites hand that feeds it:

Forget for a moment the inherent silliness of picking a national college football champion based on flawed computer rankings and even more biased human polls.

All of those are legitimate reasons to junk the Bowl Championship Series in favor of a national playoff. But here's an even better one:

The current bowl system is corrupt and school presidents with a shred of integrity should be embarrassed that they have collectively kept it in business.

That was my takeaway from "Death to the BCS," a new investigative book by Dan Wetzel, Josh Peter and Jeff Passan, three Yahoo!Sports reporters who have exposed the bowl system as a self-serving scam that sustains its grasp on college football's postseason at the cost of not just identifying a legitimate champion but also the financial well-being of the athletic departments it is supposed to serve.

But wait, gets worse:

Conferences hide the losses by pooling the payouts to all their bowl teams, then redistributing the wealth in equal shares. The book explains how that process whittled Florida's $17.5 million check for playing in the 2009 BCS championship game down to a profit of $47,000.

Holeeshit! DeLoss will NOT settle for this. Or will he?

Meanwhile the Fiesta Bowl has said they will change course which is legalese for oh shit Dan Wetzel is on our ass!!!

Anyway, it comes out soon and you should buy it. 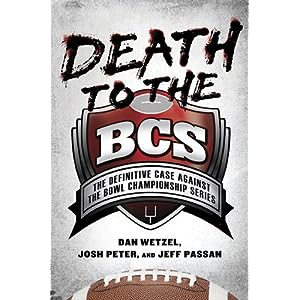