Vince Vaughn is a detestable human being.

From the various things I've read about him online in regards to his general behavior, demeanor, and particularly his eating habits, the man deserves to be caged like an animal and poked with sharp sticks by children on field trips.

A Stoopsian level prick, if you will.

That being said, there's no arguing that the man can certainly deliver some great comedic lines and first-class rants, regardless of the fact that he's essentially playing himself, minus the mustard stains, in every film role. Why is this relevant? It's not really. Save that  in regards to this viewing guide, I keep channeling Vince Vaughn's diner scene in Mr. & Mrs. Smith.  Where am I at? I find myself dragging my feet this morning. And I think Sailor owes me a little money anyway.

That's a bad place to be creatively. But I'm ready to go Opposite Greg Davis. Lets see if we can't manufacture something from scratch this week, get some momentum, and then build from there. 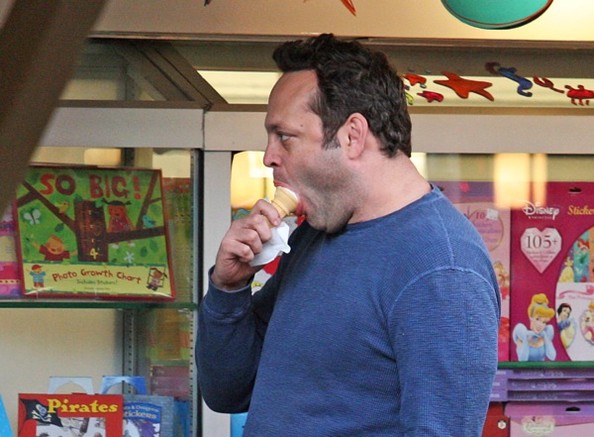 Disgusting. The whole thing, despite fear of brain freeze. CHEW YOUR FOOD!

Florida State at NC State (ESPN): Sweet fucking christ, are we collectively staring down the barrel of Florida State as a BCS bowl team? Sheesh, they've lost only one game to a ranked team in a hostile environment, and they beat a ranked Miami team that woke up that morning with a collective case of weapons grade vaginitits. There's a couple of tougher games remaining, including Clemson, North Carolina, and Florida. However, seeing the Seminoles run the table or even a two loss ACC winner in a BCS game is a serious possibility at this point. And that possibility makes me ill like someone just spiked my drink with mercury. And NC State, criminy,  they just got beaten by Purple Grimace and his evil crook-eye and preponderance of brow sweat. They're not looking like stout competition in light of that utter and abject embarrassment. Anyone who wants to tout the strength of the ACC as a football conference should be tested for some form of congenital brain damage. Seminoles roll. Tom O'Brien wonders stupidly why God has forsaken him.

#17 Oklahoma State at Kansas State (FSN): Well, we certainly can't look at last weeks Okie State game against Nebraska and say that they ran into a buzzsaw. More like they ran into a shootout after Gundy and Pelini made good on their handshake agreement to sit both of the defenses and see who would win in the football equivalent of Horse. Add to the fire that Oklahoma State's best player is almost certainly ineligible after a DWI this week, and this game might not be the easy win some would think. Although, Kansas State hasn't exactly been a rolling ball of butcher knives thus far this season. Should make for a fairly entertaining morning game. I'm more interested in the pre-game meeting between coaches where Gundy uses both hands and some spit to style a stoic Snyder's hair and convince him that his belt and pants shouldn't be cinched just below his nipples.

Clemson at Boston College (ESPN3): I've grown weary of attempting to find reasons to make Boston College interesting. Although, when forced to account for my actions to St. Peter, I'll have to admit I haven't tried very hard. And with reason being that there isn't enough interesting things to examine about the Golden Eagles. More fascinating factoids exist on the back of a nutritional label for Metamucil. Which, incidentally, is in direct correlation to the defense Clemson fields.  Blah Blah Blah, altar boys, blah blah. 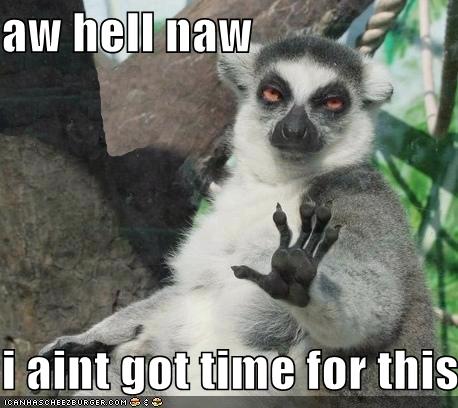 #5 Michigan St. at #18 Iowa (ABC/ESPN):  Here we go, here we go, but I'm not Domino. This game is pretty huge.  Iowa has one more chance to knock a monkey wrench into the Big 10's best shot at a national title appearance. And for Michigan St, if they can pull out this game it's relatively smooth sailing the rest of the way until an end of the season showdown with the Nittany Lions. And as much as it pains me to say it, Iowa is no slouch. And while I resist the urge to finish that paraphrase from Caddyshack, let me explain by saying that Iowa has two losses, close and heartbreaking respectively, to two good teams. And Michigan State has squeaked by several of their opponents, and you have to be thinking that replaying 300 before every game this season is somewhat losing it's ability to inspire and motivate. At this point, they have to be pondering the overt homoerotic imagery. The confusion and softness inspired by questions such as these will have them in a vulnerable state that Iowa can exploit. I hear they're re-painting the visiting locker rooms pink for this very game. <lisp>Spaaaaaaaht-eeeeeeeeee</lisp> might be in trouble. Then again, I've been saying this every goddamn week, and if it doesn't happen here, I'm not sure it will happen at all. So...take this as a testament to just how much I know.

#6 Missouri at #14 Nebraska (ABC/ESPN): I have absolutely no idea who I should be cheering for in this instance. Do I want Missouri to stay on undefeated? Probably not, but I sure as hell can't think of any reason I would want the meltdown taking place in Nebraska to cease. Also, I could be mistaken, but I believe that these two schools don't like each other all that much.  After what Oklahoma State did to Nebraska's no longer vaunted D, Gabbert and Missouri look like they'll be able to put up plenty of points on Nebraska. By the same token, I'm still not sure they're going to be able to stop T-Magic (so gay) if his receivers actually decide to catch balls. Or if they run. This has all the makings for a really good game where we're all winners as fans. Particularly if a renegade donkey blunders onto the field and mounts a protesting Bo Pelini, instinctively recognizing a hairless member of his own species. 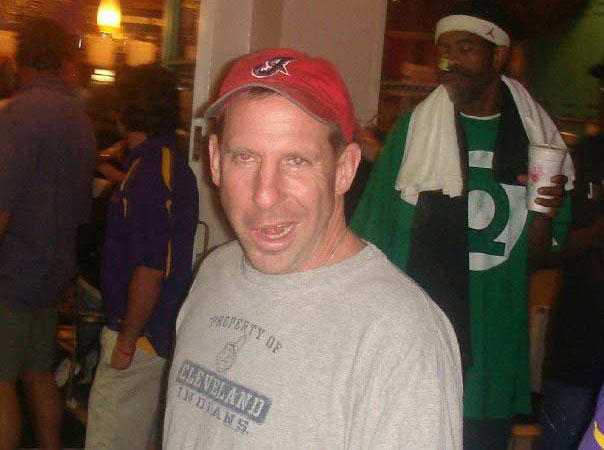 Don't even pretend you don't see it. That's a bray, folks.

Florida vs. Georgia (CBS): If I'd previewed this game 4 weeks ago, we'd have probably seen a good but not great Florida team against a Georgia squad blubbering and whimpering incoherently in a corner, covered in their own urine and shame, starting at any sudden movement or loud noise. It would have been more like the World's Largest Cocktail Party minus the cocktails and sluts in sundresses. But after a few short weeks of Greg Davis style running scores up on inferior opponents, lo and behold we're looking at a team that's won 3 straight and has regained some confidence. Meanwhile, Florida's meltdown is approaching epic proportions as they've lost 3 straight games, each worst than the last, including a beat-down at the flippers of LESTER MILES. If Urban Miles isn't already vomiting up blood and liver matter, he will absolutely be hospitalized if the Gators lose to Georgia, because one of his own fanbase is applying lipstick and circling him on their People To Kill list as I write this viewing guide. The good news is that all of a sudden, The World's Largest Cocktail Party moniker remains valid. Go tear off some sundresses, boys!

#13 Stanford at Washington (Versus): Stanford is coming off of a bye week, if I'm not mistaken, which means that Washington is absolutely and in no uncertain terms about to have their shit definitively pushed, and with a hint of violence. None of that tender shit we might find out somewhere in the Big East, or other areas of the Pac 10. Harbaugh is old school, like steel-toed boots and pulling out as the primary form of birth control. Incidentally, the man also thinks a few dollars for an indulgence at the nearest church absolutely absolves him from pistol-whipping...well, pretty much anyone to death. And after I watch him put together a running game and a football team, I'm inclined to agree with the man. Watching his offenses is like watching Porn. It's fascinating and filled with pleasure, but still that little bit of sadness that it isn't YOUR fuck buddy/cum dumpster/offense. Washington is a Meh team, and Stanford is a junk yard dog. Enjoy the carnage.

#25 Baylor at Texas (FSN): Well well, this should be interesting. And by interesting, I mean that I'm absolutely and unquestionably returned to the state of teeth-chattering terror that was my default before the Nebraska game. The only thing that I can possibly fathom as more cringe-inducing than back to back home losses to Baylor and Iowa State would be watching the miracle of life through the frame of Rose O'Donnell's unkempt and splayed legs. And if a sideways pass erupts out of our gameplan like such a fur covered monstrosity, I will hurl myself through the nearest window and jab a shard of glass into my jugular. Or I'll do that to someone else. I'm not quite sure which yet. Anyway, Baylor is respectable, and Robert Griffin the Third is real deal Hollyfield. The only good news is that they're not exactly built to gash us up the middle with the run, but at the same time having him scramble around back there and asking our DB's (safeties and Chykie Brown, to be specific) to hold coverage is an image to provoke night terrors. Again, playing the odds, Texas should bounce back with a pretty solid win here, but at this point, no one can be sure what to expect.

#2 Oregon at USC (ABC): Jesus, if this game and Stanford are sandwiching TV's against the UT game, my head might explode from the high visibility of well executed and schemed offenses that work like symphony orchestras. As opposed to a brain damaged toddler whacking the shit out of a miniature xylophone with a limp spaghetti noodle. USC has one decent weekend, and now all of a sudden I have to listen to ESPN about how they're dangerous, they're a trap game, Lane Kiffin took mindroids and increased his IQ 200 points to a respectable 130.  Personally, I'm not buying it. Oregon's absolutele dismantling of UCLA was as complete as Anakin Skywaler's journey towards the dark side.  And so has pretty much every other game they've won this year. USC has the athletes to make some noise, but the next time that idiotic brat wearing the USC headsets gets his team to play organized football for a solid 60 minutes will be the first time, and that includes his legion of well documented failures at Tecmo Super Bowl. This idiot found a way to fuck up Bo Jackson as an offensive weapon in that game. Another victory for Oregon on their march (hopefully) to a national title appearance. 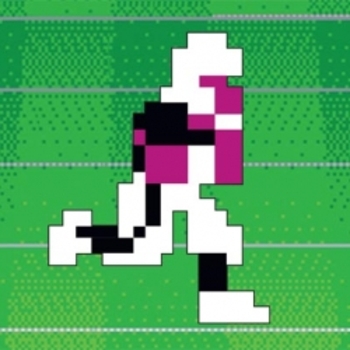 Unstoppable. Save to one man.

I apologize for the lateness. Again. As always, kindly ignore spelling as I are stooooopid. Calls for my head and anything I might have missed welcome in the comments.