Fantasy Football Destroys Everything It Touches

Share All sharing options for: Fantasy Football Destroys Everything It Touches

So last night I'm writing a post. It goes well into the night. And eventually I realize, wait, I haven't checked my fantasy scores.

Not that I was too concerned. It's not too often you lose a 40-point lead when the other dude has one guy left in the Monday Night game. 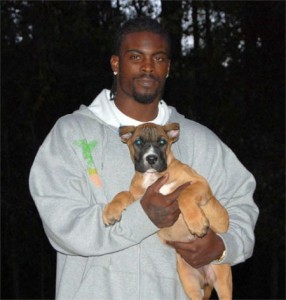 Oh lookit, he's got a little puppy! How cute.

I haven't played fantasy for years. Then in June, a compadre of mine offers a spot in his league. His crew are a bunch of Army rowdies to whom you would never introduce to your mother because they might flip up her longskirt and grind her, just to snap a pic of your bewildered face and tag you with it on Facebook. Well actually most of them wouldn't. But they might be tempted to mount-n'-snap if they could avoid prosecution. League winner gets free dinner and a night of booze at Twin Peaks.

The idea of getting sloshed with military dudes at an alpine-themed Hooters ripoff? Not my usual thing. So long story short, that's why I joined the league...

Let's transport you to another place. It's two days ago, a beautiful mid-November Sunday afternoon in Austin. You're lounging outside at the neighborhood pub. The TV's on, and it's showing the Browns-Jets game. Colt's in the game and playing well. The game is close.

And you're three beers past sobriety, and you have the Jets kicker on your fantasy team.

You see where this is going.

Your fantasy matchup appears to be totally up in the air, because the dogkiller has yet to play, and God enjoys screwing with dudes who waste their time on imaginary games that require no actual skill and take five agonizing months to complete. Must be his pet peeve.

But even though this game doesn't matter, in the moment? OMG THIS GAME MATTERS. Or more accurately, the fortunes of your team MIGHT lie on the slumpy shoulders of Nick Folk, 30-year-old former Cowboy castoff who hails from Arizona State or some other bullsh*t university (I don't care enough to look it up).

Near the end of regulation, Nick Folk misses a 47-yarder, and Colt's Browns are still in it.

Does this make me happy? Sad?

And that's messed up. What's even more messed up? All the maddening scenario-twisting you go through during the games. Something like:

"OK, I want Colt to win...but I want Nick Folk to score at least one more field goal...and the Jets will probably get a touchdown since they're in the red zone...which hey, that's one point at least...so I'm not just rooting for the Browns. I'm rooting them to score 14 more points, so the Jets can score 10, so I can get at least 4 more fantasy points and possibly up to 12. As long as the TD isn't a pass to Dustin Keller, I'm all good. Go Jets special teams! Go Browns red zone defense!"

Meanwhile, the  other 95% of my brain is saying: THIS IS F*CKING PATHETIC.

But college football is so much better for my sanity. Because even when we suck, we're Texas.

If you ALSO need to let off some steam by bitching about your fantasy season, please do so in comments. Though honestly no one wants to hear it.