It's 5-ish on Thanksgiving afternoon. And ri-i-i-i-ght about now, Pops should be sliding the turkey out of the oven for carving while Aunt Jean puts the finishing touches on the giblet gravy. Mmmmmm.

For the past hour my mouth has been salivating.

But for the first time in years, my obligations have kept me a couple hundred miles away. So I'm left with what appears to be an eight-month-old turkey pot pie, wondering if prolonged freezer burn chemically degrades all the tryptophans or what.

Meh. I'll be drinking my way through this next game soon with the boys, so it's all good. I'll pester them for their family leftovers or something.

But in the end it's probably good for my mental stability that I'm not with family this year. My cousin recently married this young man who's truly a great kid - handsome, pleasant, good sense of humor, the whole ball of wax - and I couldn't be happier for them. But he's a recent Aggy grad. And recent Thanksgivings have taught me that it's not usually a great idea for the two of us to watch the game together.

When he gets all Aggied up, it's totally insufferable. He tries to spot when the Aggy crowd at the stadium is chanting so he can chant along. Then he sings the Aggy War Hymn after every score.

That last part is actually fine, as long as we Longhorns sing along. With the correct words of course.

This requires a story. At the Ricky game a decade ago, I was sitting right next to the Aggy section, plastered on some unholy concoctionof vodka-based jungle juice, tailgating beer, and Ricky love. As an extra treat I gave my other ticket to a hippie pal of mine from Walla Walla Washington who'd never been to a football game before. Not. Once. Dirty, dirty hippie.

About midway through the second quarter, he leans over to me and asks why the Aggy band keeps playing the Yogi Bear theme song.

You can guess what we did for the rest of the game.

He is always getting in the RAN-GERS HAIR!

Grab a Picnic table you will...FIND him there!

The Aggy alums sitting right next to us were, shall we say, not pleased. But screw them. 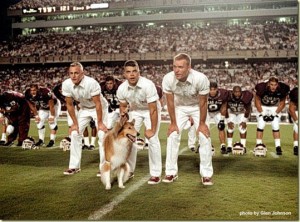 On a final note, I was gallivanting through the Longhorn interwebs yesterday and ran across this post by TheElusiveShadow on BON. It's just another musing about how good our defense actually is, or isn't, looking at the stats for confirmation.

But along the way he brings up our poor red-zone defense. And I thought to myself, wait, how good IS our red-zone defense? Looking back, I could only remember one effective stand in the red zone. And that was against Rice.

So I compiled a full tally of our red zone plays on defense this year. I can't get Scribd or DocStoc to work right, so here's a link to the PDF:

When putting this doc together, I was focused on positive and negative play-by-play performance. For each drive, I first tallied the number of plays, runs and passes, TFLs, TOs, and points scored. Then after thinking about it, I went back and added a few more things:

* Long touchdown plays that never had led to a down in the red zone are listed in blue. I'm not including them in the tallies, of course, I just wanted to know how many there were.

* For each drive, the play that puts the Longhorn D in the red zone is listed first, in italics. These are not tallied either, but included to get a sense of why the Horns are in the red zone in the first place.

* Over the course of the year, there were some drives that I felt were outliers in the analysis. Two drives by Wyoming that didn't breach the red zone until 4th down, for example, and times where the defense get the ball in the red zone inside the 5 yard line. These and other outlier drives are listed in red, and in season tallies I include one row with those drives included and a second one without. Excluding these makes very little difference when looking at the season as a whole, as it turns out.

* After some thought I decided to include pass breakups as TFLs and field goal attempts as TOs. For TFLs, what I'd really like to get at are plays that exert the D's will on the O, and I think PBUs should count by that measure. For TOs, this post makes a very good case that what matters in the red zone isn't preventing scores but preventing TDs. Three runs for no gain followed by a FG should be considered a win for the D, and I wanted to use the TO category to get a sense of how often the D was compiling these kind of wins.

And the results are...

We've run 73 defensive plays in the red zone. Of these, opponents have rushed 45 times, with 28 passes. Of those 45 rushing attempts, the offense has managed a "plus" play on 25 of them - well over half of the time. The pass D has allowed "plus" plays on 11 of the 28 passes - better, but still not great.

On the whole, the D has allowed 36 "plus" plays out of 73 attempts. That's virtually half. That's egregiously bad.

We've gotten 11 TFLs/PBUs, and 9 TOs, though it should be noted that 6 of those TOs are field goal attempts (5 made, 1 missed) and only one is an actual turnover (plus 2 fluky late TOs on downs against WY). That's also egregiously bad.

Out of 32 red zone attempts, opponents have gotten 23 TDs, 5 FGs, 2 turnovers on downs, 1 missed FG, and thrown one interception. That adds up to 5.28 points per red zone attempt, 5.48 if you take out the fluky outliers. Stinky-bad.

Nine times, the offense scored a TD on their first play in the red zone.

In comparison, we've allowed 7 TDs all year from more than 20 yards. That's not great, but not stinky-bad either.

I could go on, but I think y'all get the point. The red zone has been our Achilles heel.

I suspect this is mostly a personnel issue - and not just on the D line, but also in the LB corps. We miss Muckleroy in the red zone - he didn't have plus size and speed, but he sure knew how to scrape between the tackles and plug the open gap. In any case I don't think this can be blamed entirely on Greg Davis.

Your thoughts are welcome.