Pony Excess: Tipping Point in The Demise of The SWC

Share All sharing options for: Pony Excess: Tipping Point in The Demise of The SWC

Our brethren over at Recruitocosm have been ahead of the curve on their coverage of the changes in the coaching staff over at the 40 Acres, and now they holding class on street agents -- who have infested college basketball over time and are now setting their sights on getting a stranglehold in college football.

As hard to believe as it may be for this younger generation, there was a time when football recruiting was a cesspool of outlaw activity -- without the need for middlemen.

The ESPN series "30 for 30" already went over some of this territory with the 1980's saga of Marcus Dupree. Texas was a participant in that particularly nasty recruiting war in 1982, but there were battles being fought on other fronts at the same time that would help send Texas wandering in a desert of mediocrity for two decades while sending the Southwest Conference to the scrap heap.

After the Heisman Awards Show tonight, ESPN will conclude its "30 for 30" series with the debut of "Pony Excess," the story the SMU Mustangs wild walk down the Green Mile to the NCAA electric chair. It is a fascinating look at a time when out-of-control boosters ruled the recruiting trails like outlaws in the Wild, Wild West, and how one school paid the ultimate price for everyone else.

The cash flow began in earnest in the late 1970's, and while there is no "smoking gun" revealed in the film, the circumstantial evidence is overwhelming. It begins with the "Pony Express," tailbacks Craig James and Eric Dickerson. The duo played high school ball within 75 miles of each other, and aside from the fact that they both ended up at SMU, they also claim that Texas pissed them off during the recruiting process.

To understand the mindset that brought about the reckless cheating that was rampant during the 1980's in the SWC, you need a little history lesson. First there was the fact that the league had 8 of its 9 members residing in the same state. While high school football in Texas produces a wealth of talent, it still made for a lot of hard feelings among coaches and schools who were always fighting over the same elite recruits - to say nothing of the out-of-state competition.

Then you had to take into account that in the business world you were always dealing with someone from another SWC school, and bragging rights became even more of a badge of honor. As one booster put it back then, "Every school has at least one bitter rival in the league...and of course everyone hates Texas"

SMU has a history of its own when it comes to pushing the envelope in terms of the rules. My late Father-in-Law played for SMU back in the late 30's and early 40's -- and he had a Sugar Daddy who looked after him. Tickets were sold for 10 and 20 times their face value. This was right before the NCAA instituted a "Sanity Code" to curb abuses in recruiting and financial aid.

Still SMU had established a trend that continued for decades. By the mid-80's the Mustangs had been placed on probation five times by the NCAA. SMU was a small, private school in the SWC, and the Ponies had always wanted to be the "USC of the Southwest." But the days of Doak Walker, Kyle Rote and Don Meredith were long gone by the 1970's. The Dallas Cowboys were now firmly entrenched as "America's Team" and the Mustangs were languishing in the Cotton Bowl and near the bottom of the SWC. By 1978, new Athletics Director Russ Potts came up with a marketing plan designed to tap into the growing Dallas Market.

Rather than fight the Cowboys and the NFL, Potts decided to join them. SMU moved out of the Cotton Bowl to Texas Stadium in 1979 - just in time for Dickerson & James. Attendance doubled to over 52,000 for Pony games. Coach Ron Meyer, who had been at Div II UNLV before coming to SMU, already had the Vegas style down. He also already had a slush fund operating at full throttle.

Once again the law caught up with the Mustangs and in 1985 the NCAA slapped them with three years probation for recruiting violations, including payments to recruits. The Ponies were also banned from bowl games in 1985 and 1986 and television in 1986.

Former Governor Bill Clements was head of the SMU Board of Governors, and according to Bum Bright, Chairman of the Board of Regents and Texas A&M, Clements put the rest of the conference on notice that the gloves were off.

"Clements says the next one is TCU, then Texas Tech, then the University of Texas," Bright said.

"The Southwest Conference - The OPEC of College Football"

That's what Arkansas coach Frank Broyles said coaches from other conferences called the SWC -- since the league was supposedly establishing the going rate for running backs, quarterbacks and wide receivers.

Within a month of the Ponies going on probation in 1985, they invited the NCAA back on campus to snitch on their fellow members of the SWC.

Jim Wacker was stunned to find out that payments to six players continued after he had ordered them stopped.

When Jim Wacker was hired at TCU in 1983 he learned that the Horned Frogs had a slush fund of their own. Dick Lowe was the point man for the TCU fund, and Wacker had told him to shut it down.

After SMU pointed the NCAA in their direction, Wacker learned that six players, including star running back Kenneth Davis, were still receiving payments. Wacker suspended the six just three games into the season in 1985 and TCU struggled to a 3-8 record. For their cooperation, the NCAA rewarded the Frogs by dropping the hammer on them to the tune of a three-year probation that included a TV ban and the loss over 30 scholarships. It was one of the harshest penalties ever dished out by the NCAA. 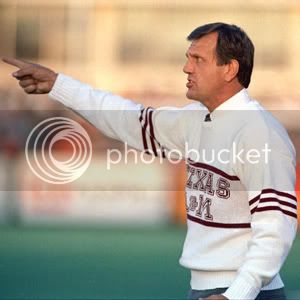 While the Pony Express was racing along in 1982, Texas A&M upped the ante by hiring Jackie Sherrill away from the University of Pittsburgh.

In late October of 1982, Texas was in Lubbock to play Texas Tech. The contest had a late afternoon start time, and in the press box, the TV's carried SMU's 47-9 blowout of Texas A&M. Jackie Sherrill was in the first year of a six-year deal for the then-unheard-of amount of $1.7 million. Sherrill's post-game comments were a telling - and chilling prediction of what was to come in the Southwest Conference.

"That's okay, that's okay, I'm just letting everyone know that they had better get their shots in now," said Sherrill, because we will do whatever it takes to make sure this doesn't happen in the future."

By 1985 Sherrill was true to his word, the Aggies were winning, and SMU was true to theirs as they helped send the NCAA to Aggieland.

There were reports in the Dallas media that star quarterback Kevin Murray was driving a leased Datsun 300SX for free as well as getting envelopes of cash from Aggie alum Rod Dockery. A Dallas TV station confronted Murray with the lease, and he claimed his signature was forged.

It took the NCAA three more years to catch up with Sherrill and the Aggies. In 1988 the Aggies were put under probation by the NCAA for a period of two years. Violations included extra benefits and lack of institutional control. In December 1988, Sherrill resigned.

"You Have A Payroll To Meet."

Sherwood Blount, Jr., played at SMU for Hayden Fry from 1969-71. He had become a successful real estate developer and he was the driving force behind the SMU slush fund that had been operating for years. Within a month of being slapped with the probation in 1985 Clements and Blount decided that the 13 players still on the payroll when the NCAA sanctions were announced would be paid until their eligibility was up. From 1985 through 1986, the 13 players were paid a total of $61,000.

In June of 1986, WFAA-TV got a tip about the continuing payments and they tracked down David Stanley who had played linebacker for the Mustangs in 1983 and 1984. Stanley claimed he was paid $25,000 to sign with SMU and received monthly payments while playing. He also said he continued to get paid after SMU went on probation, and he had kept the envelopes the money came in. The envelopes were dated and in the hand writing of SMU recruiting coordinator Henry Lee Parker.

In November of 1986 Dale Hansen of WFAA hosted a 40-minute special that detailed the new allegations, and reported that Stanley was talking to the NCAA. The report confirmed that not only were the payments ongoing, but they were approved of by the SMU administration. It was Blount who told SMU President Donald Sheilds that the payments needed to continue because, "You have a payroll to meet."

While running for Governor for a 2nd time in 1987, Bill Clements admitted to authorizing the continued payment of SMU football players.

In March of 1987 Bill Clements admitted that the SMU Board of Governors continued the payments after SMU went on probation, rationalizing that they had to honor their contracts with the players. When asked why he hadn't told the truth about the payments earlier during the investigation Clements answered he hadn't spoken up sooner because "there wasn't a Bible in the room."

The NCAA opened up a new investigation and this time SMU could be punished under a new provision that called for a program to be shut down if it was found guilty of major violations twice within a five-year period.

There were some interesting sidebars discovered during the new investigation. For instance, a couple of the SMU football players had broken into an assistant coaches office. They were searching for his stash of hush money, under the (correct) assumption that they could steal it without fear of it being reported.

The NCAA Infractions Committee did not agree.

The Mustangs were banned from football competition in 1987. The school voluntarily scrapped the 1988 season because of restrictions brought by other sanctions. The committee cited SMU's long history of NCAA violations as a major factor in shutting the program down.

SMU brought football back in 1989 under alumn and former Green Bay Packer great Forest Gregg, but it would be a couple of decades before the Mustangs would be really competitive. Since returning to football, SMU is 74-175.

However, June Jones has produced back-to-back winning seasons, and the Mustangs will go bowling for the second year in a row.

The NCAA dropped Weapons of Mass Destruction on the Mustangs, and it is doubtful they will ever do so again. Phil Bennett went 18-52 as Head Coach from 2002-07 and he summed it up thusly:

"It's like an atomic bomb,'' said Bennett. "The NCAA did it once and caused devastation beyond belief, and it's never going to be done again.''

The Southwest Conference can be counted among the collateral damage from the penalty. The league was fighting a losing cause - thanks to its parochial setup -- and there is little doubt that the league eventually would have been swept under by the waves of change brought about by TV and the BCS.

But the in-fighting and back stabbing that continued unabated after SMU's demise certainly sped up the process.

There is at least one universal lesson that can be gleaned from rummaging through the carnage of that outlaw period. No matter the problem, be it boosters or agents: