Four Seed? Sounds About Right To Me

Share All sharing options for: Four Seed? Sounds About Right To Me

Let's get this out of the way: yes, the Horns were jobbed. 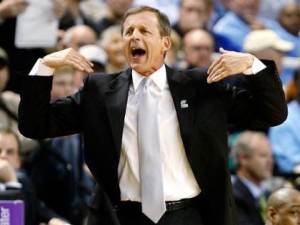 No top 10 team (with top 5 starting talent) that falls in the finals of their conference tournament to arguably the #1 team in the country should end up with a measly four seed and a tough opener against Oakland.

And yeah, looking at the rest of the bracket it seems the selection committee neglected time-tested methods and chose instead to determine seeding over an eightball of cocaine and a rousing game of ass-tiddlywinks (it's like tiddlywinks, except you can't use your hands, or wear pants).

But honestly? Given how the season has played out so far, I figure there are at least twelve teams more prepared to succeed in the tourney than the Horns right now. Maybe more.

My knowledge of the game isn't up to Trips' lofty level. I'm sure he'll bring some hefty analysis soon, and it may bring me utter shame. But I'll risk it because, eh? I'm bored, I suppose.

Here's the core issue. Both our offensive and defensive gameplans require lots of energy and discipline to work. That's dictated to us by reality. We don't have much depth, we don't have a true point guard or a second low post player to complement Tristan, and that leaves us with limited options on both ends. We have a working game plan but not much room for error.

Defensively we want to deal with our shortcomings by smothering the opponent. That is, long active arms altering jump shots and ball-you-man defense flowing traffic toward Tristan, with Hamilton/Johnson swooping in to help clean up rebounds on the weak side. It's a plan suited to our personnel, and deadly-effective as long as our opponent doesn't have two serious post-up threats against us. If we bring the energy and discipline to execute, we'll play winning basketball on that side of the court.

Our offensive strategy deals with our shortcomings by forcing the opponent to maintain coverage discipline through a constant stream of screens and cuts around the paint designed to confuse the defense and create easy buckets. Without a true point or a hefty garbage man on the weak glass, it's our only way to get easy shots without relying on Jordan/Tristan/J'Covan to pull off a full game's worth of one-on-one miracles. It's a good strategy suited to our personnel. Except we pretty much stopped doing it after the first Kansas game.

It's not that we've abandoned the offense exactly. It's more like the players have started to consistently refuse to do it the correct way, i.e., with energy and discipline.  They're now taking forever before getting into their cuts and screens, sometimes just staring at each other, like "You go!" " No, you go!". When the ball goes to one wing, the weakside wing - most often Jordan or J'Covan - now starts to slowly (and maybe unconsciously) creep toward the ball rather than make baseline cuts or camp out quietly beyond the arc; his defender is then in position to clog up the paint when the screens and cuts come, if they come. By the time the ball ends up in a scorer's hands the offensive flow is gone, the defense isn't where it's supposed to be, and confused and contested shots follow.

It's steadily become an undisciplined mess out there. Our competitiveness on the offensive end over the last ten games or so has been directly linked to how well our main scoring troika can manufacture points against a defender in good position. I don't care if you've got Jordan and Kobe out there: that's not winning basketball. Certainly not in the NCAA tournament when both the defensive and psychological pressure kicks up a notch.

This should look familiar. It happened to the Horns last year. The consequences were more devastating, sure. That team had a bigger mismatch of parts and fewer quality options on offense. But at its core, last years team started to wilt when they stopped showing the same energy and discipline on the offensive end that they routinely brought to the defensive end. Same story this year, so far. Having the Canadians and an improved Jordan Hamilton makes up for some of that, but not enough to make the quality of offensive basketball match the talent level.

My suggestions, to the coach from the couch:

Play Balbay. Yes, even if they slink off of him. His energy level is contagious to the point where the crowd palpably feeds off of it, and his one-man press can utterly discombobulate the ballhandler and create fast break points. Plus his minutes let Cory and J'Covan get some rest. Early in the season I thought we did a good job keeping defenses honest on Balbay in the half-court by using his energy to run screens and cuts. Defenders rarely had a chance to slink off of him because they were too busy running through traffic trying to deny him the quick pass and running one-hander at the rim. Lately? Not so much. I'm guessing that Barnes realizes that as long as the motion offense is broken Balbay is a bad play. But the solution isn't to sit Balbay. We should play the damn offense correctly, and get into it quickly so that Balbay has enough time to do his waterbug thang off-the-ball and create havoc.

Stress spacing the floor in practice. To Bobby Knight's eye, the Horns' offensive problems have mostly come down to spacing. And I agree. Like most sports, basketball is all about numbers. Can the defense put at least one adequate defender on every immediate offensive threat at every moment on the floor and still have rebounding position? It's hard. But if the offense is sloppy and allows defenders to play double-duty, the task becomes exponentially easier. Once a wing defender can cover both his assignment and the entry lane into the paint, or the high post defender can cover his man without giving up a huge gap on the weakside glass, the next few seconds of your possession will instantly become garbage and the whole thing may fall apart.  Our guys need to be more patient, waiting their turn to make a move rather than getting worried and creeping slowly toward the action.

Rest. Because we don't have much depth. I do not believe that any of the sub-par performance we've seen lately from Jordan, Gary, etc., are due to an offensive mutiny a la 2010. They really do seem like they're trying, and keeping their heads up through it all. Instead I'd bet the offensive sluggishness is mostly due to dead legs and the single-minded behavior that exhaustion inspires, which leads in turn to frayed trust and selfish play. The schedule has been pretty demanding for the past six weeks or so...and to my eye at least, it seems the lack of energy on the offensive end really first took on a life of its own in high-altitude Boulder and our guys haven't had a chance to fully recover since.

They're saving their energy for the defensive end because that's the priority in a Barnes system. When your energy resources are constrained, you have to make tough choices, so I have no problem with that. But in the meantime they've fallen into some bad habits on offense which need to be broken pronto, and the only way to do it is with discipline and high-energy play. Since both our offense and defense require lots of energy, I'd strongly suggest a practice regimen high on walk-throughs and film study and low on wind sprints.

All that being said? This year's bracket is insane. A toddler could have produced fairer matchups using nothing but a stick and a pile of wet doggy poo. So please don't pin all that on me. All I'm saying is we're probably not a top 12 team if we don't restore our offensive play from mid-season.

And apparently some important retards agree with me.