Share All sharing options for: The Real Injury Risk for the Rangers (And It's Not Josh Hamilton) 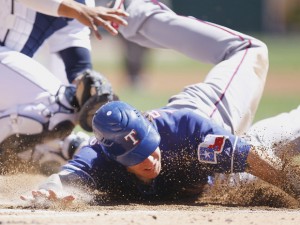 Josh Hamilton's injury, the merits of the play he was injured on, and the resulting effect on the Rangers were all national stories this morning. I haven't heard this much chatter about the head-first slidesince a clubhouse debate between Rick Leach and the fleet-footed Pete Incaviglia about whether or not it was possible to execute the maneuver while preventing the sudden invasion of infield terra firma that renders a condition described as "dirty dick" for the remainder of the contest. Good old Inky -- why he's never been a guest on Charlie Rose, I surely do not know.

Anyway, the Rangers are without the 2010 AL MVP for anywhere between 6 to 10 weeks due to a non-displaced fracture of the humerus bone in the upper right arm (they say they're planning on 8). Given Hamilton's injury history -- and the fact that certain pharmaceutical options are likely not available to him -- I'd err on the long side of the estimate. Most everybody on the beat has a story up about 3B coach Dave Anderson's decision on the play and Hamilton's post-game rant, in which he "threw [Anderson] under the bus by telling the truth about what happened." All that stuff is interesting, but I think there's a higher-altitude angle that's more important.

It's being suggested that Hamilton's absence shouldn't be a knockout blow to the Rangers chances of repeating as AL West champions. Reason: Jon Daniels structured his roster with an eye towards the kind of depth that would be necessary to overcome this kind of situation -- and specifically with respect to losing Hamilton for an extended period of time. David Murphy, who would arguably be a starter hitting around the middle in most other lineups, takes over in left field. When Hamilton missed virtually all of last September, Murphy picked up some serious slack by hitting .355/.417/.527 with 3 HR and 17 RBI for his best month of the season (.944 OPS/166 OPS+). Mike Napoliwill get more PAs, Mitch Moreland will come off 1B to play OF a little more often and both are off to very good starts. Chris Davis was recalled from Round Rock last night -- he lit up the Cactus League and was tearing up AAA pitching (.429/.435/.1.035 with 4 HR already), but that's not unusual for him. Let's see if he can make good on this 3rd or 4th chance or whatever it is. 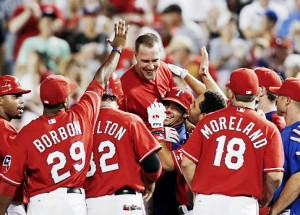 The Rangers will need more of this from David Murphy

Davis aside, it's reasonable to assume that the Rangers are a deeper club than 2010, when they did an excellent job contending with overlapping injuries to Ian Kinsler and Nelson Cruz, who missed 69 and 59 games respectively last season. Texas benefited from a strong first half by Vladimir Guererro, but it was Hamilton that virtually carried the club with Godzilla production in June and July. See where I'm going with this yet?

I'll buy some of the "depth containment" theory, but not all of it. First, as always, is the pitching. The Rangers need the surprisingly good (excellent in some cases) early performances by the 3,4 & 5 slots in the rotation -- Matt Harrison, Derek Holland and Alexi Ogando-- to become a trend. This means three guys each with very short track records continuing to out-pitch their projected peripherals. Beyond that, there's an obvious weakness from the right side of the bullpen in the mid to late innings before Wash gets to Neftali Feliz. But set that aside for now. In terms of run production, what the depth containment theory is really predicated on is sustained at or above average output from Ian Kinsler, Nelson Cruz and to a lesser extent Michael Young. And therein lies the real risk -- one can make an argument that Kinsler and Cruz are just as injury prone as Hamilton.

Although Hamilton's power metrics reflect his usual tendency to ease into the season, over a longer haul, no single player can step into Hamilton'sshoes. That said, can Murphy, Napoli and Moreland collectivelyfill most of that gap? Sure. But you can't ask any more than that, which means that Cruz and Kinsler -- especially Cruz, I think -- have to stay healthy, which is something that neither of them has been able to do.

Corey Dawkins, Marc Normandin and a couple of other guys at Baseball Prospectus have developed a pretty nifty injury forecasting system that they call CHIPPER: the Comprehensive Health Index of Pitchers and Players with Evaluative Results. If you're a BP subscriber, you can access the CHIPPER report for the Rangers here. Without giving the store away, suffice it to say that CHIPPER ranks Hamilton, Cruz and Kinsler as high risk players for DL stays of at least 30 days. Of course, based on the raw data, I'm not sure I needed CHIPPER to tell me that. Following is simply days lost to injury for the indicated seasons:

Information on the specific injuries is easy enough to find so I won't recount it here. On the upside for Kinsler and Cruz, if they've rehabbed and trained to prevent the kind of bangs that fell them last year (ankle sprains, hammies and oblique strains and a back deal, among others), they might not experience recurrences. It's not like we're talking about blown out knees, shoulders or, uh, broken arms and stuff like that. Still, both of those guys have enough of a history that leads me to believe that the Rangers will be damn lucky if both of them can stay in the lineup during the entirety of Hamilton's absence.

Here's a question for you. Assume that either Kinsler or Cruz would get hurt while Hamilton was on the DL. Under those circumstances, which one would it be worse to lose? I think Cruz. If the Rangers can get a full season out of him (or something close to it), you might be looking at a 40 HR guy.

Changed my mind on talking about the Hamilton injury play, but just for a limited purpose. Last night, Wash and Daniels were both quoted as saying that the injury to Hamilton would have no effect on the Rangers very aggressive style of play. (It's fun to watch, but can drive some of the Moneyball aficionados nuts.) Given the risk profiles for Kinsler and Cruz, don't you think the Rangers ought to play it safer at least where those two guys are concerned?

As for Josh Hamilton ...

Well, what do you expect? By now, we know what we're getting with Hamilton, which means it should come as no surprise to us when the Rangers proceed very cautiously when it comes to offering him a long-term deal when his current contract expires after 2012.

It was the top of the 9th inning in Game 4 of last year's ALCS in New York when the Old Man put Hamilton in perspective for me. Hamilton had just hit his second dong of the game, a rope out to right center off Sergio Mitre. The Old Man hadn't been there before, but he'd been to the old park across the street several times from the late 40s through the early 60s ("when," as he often says "it was the real Yankee Stadium, before Steinfuckerruined it with the remodel."). The Yanks were his team then, but he'd been a committed masochist for the Rangers since Teddy Ballgame arrived with that horsheshit team from Washington to play in that horseshit ballpark off the Turnpike. Anyway, as Hamilton rounds the bases, he leans over and shouts (he'd taken his hearing aids out):

"You know something, Son ... he's got Mantle's power, he's probably faster than Mickey was in the early 50s, he's a great center fielder, and he's one of the most athletic baseball players that I've ever seen. Except for getting drunk, Josh Hamilton can do everything that Mickey Mantle could do -- including getting hurt all the damn time and driving you absolutely crazy." 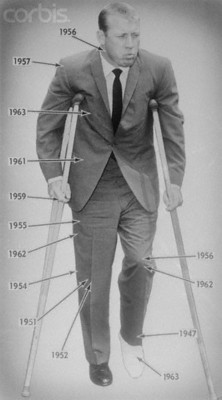