TX-OU 35 Years Ago: It Still Matters

Share All sharing options for: TX-OU 35 Years Ago: It Still Matters

Everything is ramped up -- the hype, the anger, as well as the genuine mistrust between the two programs. Fans know this and they hardly need any added factors to increase the vitriol, but it is always there. This year it is realignment fiasco.

Huck has pointed out already today that the Tulsa World actually gave Deloss Dodds a forum to give the Texas side of the story.

Of course the same paper had its columnist, Dave Sittler write a laughable opinion piece comparing OU's embarrassment over the Pac-12 fiasco to Barry Switzer lying and cheating.

Sittler's premise is that as angry as Darrell Royal was at OU for spying back in 1976, OU should be just as mad at Texas for making the Sooners look like gomers when the Pac-12 backed down from expansion.

Sittler also calls for a Sooner blowout, saying another 65-13 would be a blow for all the conference brethren. "Nobody wants a piece of Texas more than the humbled Sooners. But this time, OU is far from alone in wanting to slap that burnt orange smirk off Bevo's mug," writes Sittler.

That Texas should pay for OU's mistaken idea that they actually had the power to force us to make a move is typical of their mindset. To compare it to the truly nasty atmosphere in the Cotton Bowl in 1976 does a disservice to the rivalry.

I have posted this before, but I am convinced that so much of what went on in 1976 represents what this series is, for both sides. It's all wrapped up in a single contest that ended up in a tie.

There is no other way to describe the week leading up to the game and the contest itself. This time it wasn't about national rankings. This time it was two teams led by coaches who were spitting venom at each other in public.

The perception in 1976 was that Texas was faltering while OU was dominating the national scene. Actually since the 1971 season, Texas was 44-13 which is a 77% winning rate. But five of the losses had been to the Sooners, and OU was coming off back-to-back national championships. Royal hadn't beaten Oklahoma since Chuck Fairbanks got his version of the Wishbone rolling in 1971. Fairbanks had been replaced by Barry Switzer in 1973 and he revved up the 'bone until it ran like a Lamborghini in cleats.

But it is what was happening off the field that week that held the nation's attention.

Royal had been convinced for over four years that OU was spying on its opponents. He specifically believed that they knew beforehand that Texas was going to the quick kick in the 1972 contest. Royal had installed the quick kick into the playbook for the first time in four years the week leading up to the game.

With OU holding on to a slim 3-0 lead late in the 3rd quarter, Texas was pinned inside its own 10-yard line. There was only one sub for the play – center Greg Dahlberg – and when he went in, OU players immediately began to yell "quick kick, quick kick." Texas didn't change out of the play, and it was blocked. Lucious Selmon fell on it in the end zone and OU went on to win 27-0.

Royal was convinced that someone had entered Memorial Stadium disguised as a construction worker during stadium renovations and had spied on their practices. The charges all came to a head the week of the 1976 game. Royal had found out the name of the alleged spy. He was Lonnie Williams, who had ties to OU coaches Switzer and Larry Lacewell.

Royal went public with his accusations and even went so far as to offer to pay $10,000 to the favorite charities of Switzer and Lacewell if they took and passed lie detector tests. They of course denied all allegations.

When accused of spying, Barry Switzer replied by saying Royal was hanging out with the wrong crowd.

Switzer added that, "Some coaches would rather listen to guitar pickers than work hard," taking a shot at Royal's love of country music.

Royal gave an interview to Robert Heard of AP, where among other things he said he hoped Switzer and Lacewell would sue him for slander, so he could get them into court. Thinking the interview was over, Royal added, "Why those sorry bastards, I don't trust 'em on anything."

When that quote hit print, the stakes were raised even higher.

I was a sports reporter in Austin in 1976 and spent the day of the game on the floor of the Cotton Bowl. It is easily the most bizarre, brutal and vicious athletic event I have ever witnessed. Anyone who has been in the Cotton Bowl for a Texas-OU contest knows that the intensity level is special, for the fans as well as the players.

This one was different.

This one was personal.

This one was "Eat Shit and Die."

The pre-game warm up was tense. Hell, even the Texas fans showed up early to boo the opponent. The atmosphere was ugly. When Royal came out for pre-game, students and fans of his alma mater serenaded him with chants of "Sorry Bastards, Sorry Bastards."

Then there was the pre-game coin toss. President Gerald Ford was on hand, and he was escorted out to the middle of the field by the two coaches. One OU fan yelled, "Who are the two assholes with Barry?"

Neither coach would acknowledge the existence of the other. 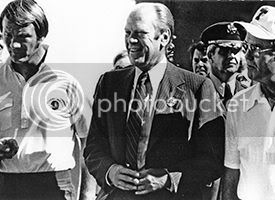 Even Pres. Ford knew that the boos cascading down from the Cotton Bowl were not for him.

The talent level at Texas was improving going into 1976. Royal recruited well that year getting Johnny "Lam" Jones, an Olympic gold medalist in the summer of '76. The class included other top talent such as LB Lance Taylor, defensive linemen Steve McMichael and Henry Williams, along with DB's Johnnie Johnson and Derrick Hatchett. Alfred Jackson was a deep threat at WR.

Earl Campbell was going into his junior season, as was Johnny "Ham" Jones. Royal relished the idea of Campbell at fullback with "Lam" and "Ham" supplying speed at the halfback positions and Jackson putting pressure on the opposing defenses from the wideout. The one glaring hole in the offense was at QB.

The season did not start out well. Texas would eventually settle on a walk-on, Mike Cordaro at Quarterback. Earl Campbell pulled a hamstring in the opening game against Boston College and it would haunt him the entire season. Injuries racked the team.

Emory Bellard, the inventor of the Wishbone offense while at Texas, said Royal felt it was their duty to help out fellow coaches who wanted to implement the new offense -- even arch rival OU.

Darrell came into my office one day" said Bellard, "and we’d already just wore Oklahoma out a couple years and he said, "Chuck is in trouble, he’s gonna lose his job and they want to put in the Wishbone. Barry is gonna be calling you, help him all you can."

Royal later admitted to Bellard that he might not be as benevolent if he had it to do over again.

But the deep feelings of bitterness between these two rivals will never change.

And a contest played decades ago, one that ended in a 6-6 tie, can still stir the emotions of those who witnessed it as strongly as any of the games between Texas and OU that have been played since.