Share All sharing options for: Washed Out: Rangers Drop Game 1 to Cards, 3-2 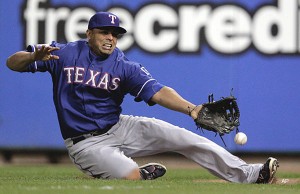 The Rangers have a better-balanced, more talented team overall, but the Cardinals have three distinct advantages: (1) Chris Carpenter; (2) Tony LaRussa; and (3) a better bench. Saint Loo used all three last night to beat Texas 3-2 and claim Game 1 of the World Series. Comprehensive reviews at Lone Star Ball; my take below:

I'll get to the 7th inning in a minute, but as managerial miscues go, that was nothing. Ron Washington actually made a much bigger mistake when he filled out his lineup card. Texas had only 8 baserunners last night. Ian Kinsler reached twice, on singles in the 1st and 6th innings. He had no chance to score either time because of the punchless chasm in slots 2-3-4 of the Ranger batting order. The biggest problems are Josh Hamilton and Michael Young, who have absolutely no business hitting 3rd and 4th (respectively) right now.

Hamilton has acknowledged that he's only at about 50% due to a nagging groin injury (is this guy ever really healthy?). This is why he hasn't hit a home run in almost a month -- he can't generate enough power from his legs and his hip turn is soft. Swinging the bat must also be awfully painful for Hamilton since he seems so eager to get it over with. First pitch in the same zip code and he's hacking. Hamilton is hitting .267/.286 OB/.378 SLG for the playoffs, so at least he's faring better than The Face of The Franchise (vomit). Young's playoff line: .191/.224/.319. Wash needs to reconfigure his lineup. His biggest producers -- Beltre, Napoli and Cruz -- are hitting too late and its costing them ABs. If not an outright 5-6-7/3-4 flip, then at least a complete re-shuffle. Matter of fact, given Andrus's lousy numbers, I'd hit Napoli 2nd. Think I'm crazy? Bullshit. It might get him one extra plate appearance per game. Andrus and Napoli have each played in 11 postseason games this year. Andrus has 51 PAs to Napoli's 45. Now who would you rather have at the plate six more times? The guy with a .190/.306/.190 line, or the one stroking .325/.400/.475? That's what I thought. Kinsler is getting on base (not as much as he should at .295, but some), but Wash is wasting his production with the Hamilton/Young vacuum. This isn't the regular season where you can afford to placate egos and let things work out.

If nothing else, this World Series offers a group hug opportunity for the troglodyte baseball press and the abacus jockey blogosphere. Most of them think that Wash is a lousy tactical manager -- and he made two decisions in the 7th inning last night that didn't do anything to help his cause. The first one is defensible. The second one; not so much.

With runners on first and second with one out, Wash pinch-hit Craig Gentry for David Murphy. The move was intended to counter LaRussa's insertion of lefty Mark Rzepczynski. Murphy hit .215 BA/.234 wOBA against lefties this year and .253/.286 for his career. Gentry was better this year against lefties in limited duty, but career-wise, his numbers are a scratch with Murphy's: .265 BA/.325 wOBA for 2011; 242/.287 career. Result: Gentry looked at strike 3. With the pitcher (Alexi Ogando) due next, off the bench Wash calls the Ruthian juggernaut otherwise known as Esteban German, who hit a spry .301 in 123 games for Round F-ing Rock this season. The 33-year-old German must have made quite an impression in his September liberation to Arlington, going 5-11 with 4 singles and a double. He's a contact-spray guy who has hit .280/.333 wOBA over 1,000 or so big league ABs. German made the post-season roster in large part because Wash's favored utility man, Andres Blanco, has a bad back. German looked like a guy who had yet to make an appearance in the postseason, which is exactly what he was. Result: struck out on 3 pitches, the last a dirt-borne slider.

The bone of contention, of course, is why Wash didn't pinch Yorvit Torrealba instead of German for Ogando? One reason being tossed around is that Wash was trying to force LaRussa's hand; make him go to righty Octavio Dotel right there, in which case Wash would have countered with one of his two available lefties: Mitch Moreland or Endy Chavez. If that was Wash's intention, he wouldn't want to announce Torrealba as a pinch hitter only to have to waste him. German was expendable in that regard. But LaRussa didn't bite, and why the hell would he? Screw the platoon advantage -- German is a slap hitter with no pop who's been on the bench for almost three weeks. Let's be clear about this: this was no Mensa move on LaRussa's part. The vast majority of major-league managers wouldn't have fallen for Wash's ploy there, either (if that's what it was). In any event, the decision to opt for German instead of Torrealba in that situation is drawing a lot of heat. Assume that LaRussa counters with Dotel. So what? For the season, Torrealba hits right-handers better than left-handers: .256 BA/.273 wOBA vs. LHP; .280/.324 vs. RHP. Wasn't this the reason that the Rangers added the third catcher -- Matt Treanor -- to the roster, so Wash could make use of Torrealba's bat off the bench?

I'll leave the C.J. Wilson debate (sign him or not) for another time and place, but the immediate fact is this: he's been a tremendous disappointment this postseason. In his 4 October starts, Wilson is 0-3 with a 7.17 ERA, 14 walks and 21 strikeouts. Opponents are hitting almost .300 against him, including 6 dongs. Last night was arguably his best performance, yielding only the 3 earned runs over 5.2 innings on 4 hits with 4 non-intentional walks and 4 Ks. In this case, the numbers don't tell an accurate tale: C.J. didn't pitch so much as he just survived and got pretty damn lucky. The damage could have been much worse. Thankfully for the Rangers, Wilson was able to keep the ball in the ballpark. But he was pitching from behind half the time (9 of the 18 hitters he faced, minus intentional walks and first-pitch plays), and was wild in the middle of the zone (that's where he got lucky). His slider wasn't biting and his cutter looked flat. Out of 94 pitches, the Cards swung and missed six times. On a night when Chris Carpenter was good but not great (and dealing with a sore elbow), this was a missed opportunity for Wilson and the Rangers. The offense shares some of that burden, but definitely not all of it.

Nobody, including Wilson, is making any excuses. There's no talk of fatigue or anything like that. My opinion is admittedly uninformed, but I sense that C.J. is one of those guys that compounds his own trouble. It seems like he's fighting three opponents in each of his last four starts: the other team, the umpire and himself. Wilson is a thinker, and he's stubborn as hell. Don't think, meat, just throw. He also seems to have forgotten that the most important pitch in baseball is Strike One.

If the Rangers will remain the series favorite if they win Game 2 tonight.