How Bryan Harsin's Texas Longhorns offense can move on the Oklahoma Sooners' defense.

Share All sharing options for: How Bryan Harsin's Texas Longhorns offense can move on the Oklahoma Sooners' defense

This is going to be shorter than the defense piece for a couple of reasons - I don’t think we’re doing much schematically on offense that’s not top grade, and I’m not really in for second-guessing our playcalling overmuch.

What I’m interested in is how we can succeed at a higher rate with the plays we’re calling, and our results in the last couple of weeks have given me some opinions on the personnel packages I’d like to see the most of against OU.

Here are a couple of examples that have me thinking the way that I do. 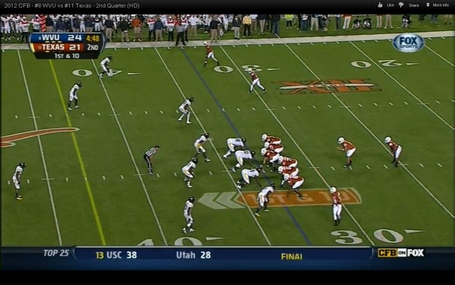 With 4:48 left in the second quarter, Texas is driving to answer WVU’s latest field goal. We’re in 11 personnel (1 back, 1 tight end) with 3 wides. While a lot of people wanted to see more throwing from us last Saturday, the way WVU has responded to this set means this is a run down all the way. With six defenders in the box against six blockers, if we hit our blocks we could go places. 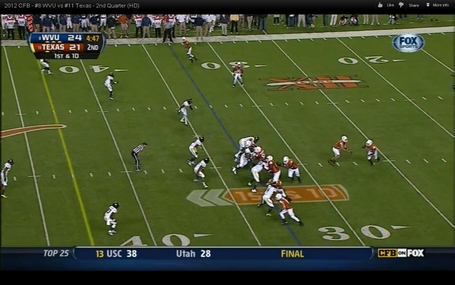 As the play begins, we’re kicking out the DE with Greg Daniels and pulling – this run is kind of like our classic Power O, but we’re pulling the playside guard around a down block from the left tackle rather than the backside guard. At any rate, Trey Hopkins is on the move and that playside linebacker had best be ready for a big-time collision. With Hawkins doing a great job against the DE, it may be up to that backside linebacker’s pursuit to keep this play from going a long way. 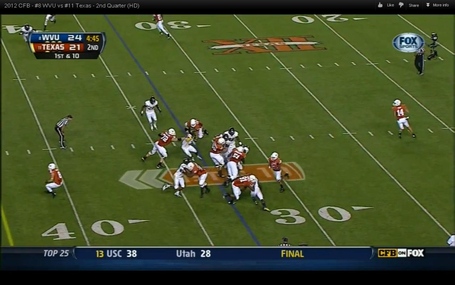 Hopkins has hit his target with aplomb, Donald Hawkins has absolutely owned his man and Walters has even gotten out to put a little hitch in the backside LB’s gitalong. Past that it’s green, green grass for #32, who knows a thing or two about what to do with that kind of real estate. But…that block from Daniels… 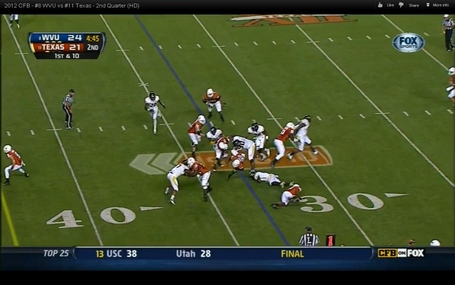 …ain’t going so good. The end fought completely through him and turned a potential home run into a 2-yard gain. 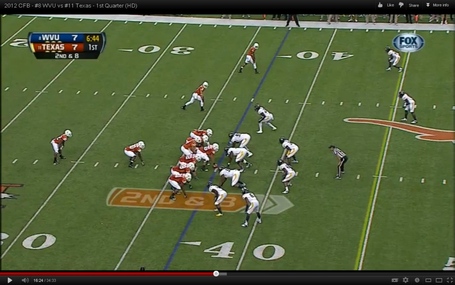 We’re over halfway through the first quarter, and driving to answer WVU’s first touchdown. We’re in 21 personnel (2 backs, 1 TE) with Roberson in the backfield and a Twins set to the left. This has been a money formation for us during most of this season, but it’s brought eight in the box in this set featuring the ‘overhang’ defender on each side of the defensive formation that made things tough on our outside/jet sweep game. 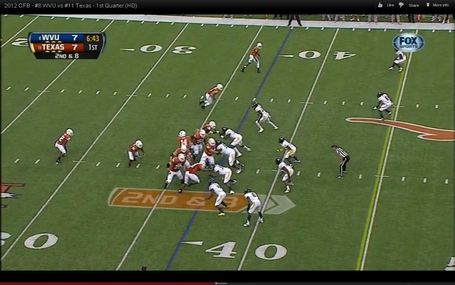 We’re attacking this look with a Pin n Pull to the boundary side. Daniels is blocking down, and with Josh Cochran and Mason Walters pulling out and Ryan Roberson leading out of the backfield we should have those three playside defenders accounted for. Ideally we’ll get a quick combo on that backside DT that lets Espinosa get off quickly enough to at least slow down the backside linebacker (#31, who had a hell of a game against us). 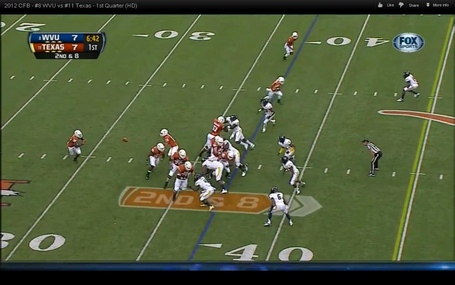 The first playside defender is about to get smacked, but Daniels has completely lost his block. 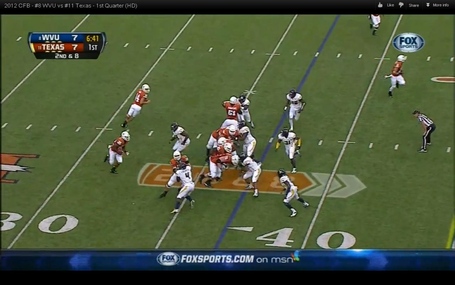 Fortunately, it’s a somewhat slow-footed DT who probably can’t change directions fast enough to lay hands on Johnathan Gray. Cochran is still handling the DE, and Walters is hitting the playside linebacker. Things are a little congested and confused, but if Roberson picks off the charging backside LB there will at least be a bubble for Gray to get into. 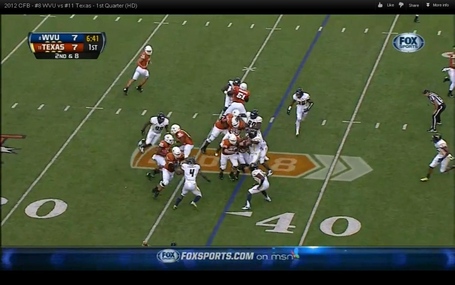 Unfortunately, Roberson hits the same guy that Walters had already engaged, and while Walters may be able to come off and get that safety… 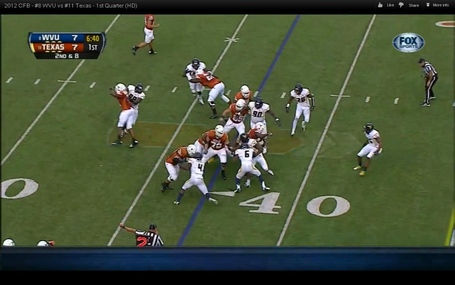 …the backside linebacker is already making the play on Gray (behind Walters). To be fair to Daniels, after losing his block initially he worked hard to peel back and help keep that DT from getting involved.

Now I’m not being totally fair to Roberson here – this wasn’t too much of a failure on his part, but it does highlight some of the targeting issues he’s had when blocking out of the backfield. I was going to highlight a couple of different plays, but the Texas-WVU YouTube vids I was working from just got pulled and these were the only pics I’d captured.

I’m not trying to pick on either of these guys (or Barrett Matthews) – all of whom have played hard and done good things for us this season. But I’m going to contend that against OSU and WVU, neither Daniels nor Matthews has handled defensive ends in the run game well or consistently enough to fill me with confidence against OU. And while either could find himself wide open on play action at some point, neither is doing much of anything in our pass game to date. For Roberson’s part, while he’s made strides as a blocker he’s also had too many instances of hitting the wrong guy, hitting no one or lunging/missing rather than locking on and driving.

Right now, Daniels and Matthews aren’t maximizing our run game and Roberson isn’t creating enough value as a fullback to justify pulling an extra defender into the box with his presence. For OU, I’d like to see Luke Poehlmann as our primary in-line tight end with us running three wides the majority of the game. When we go two wides, the formation I’d like most often is DJ Grant or McFarland lined up as an H-back just behind the line with twin receivers to the opposite side.

OU’s defensive line is just OK, and their DTs scare me a good deal less than OSU’s did. Their linebackers are verrrrry iffy in terms of taking on blocks, and Wort may be iffy in every aspect. I can promise you right this minute that OU’s coaches are terrified of what our OL will be able to do against their LBs on Power O and Outside Zone if their defensive end can’t beat up our tight end and gum up the works. If we’d like to bring in an extra blocker, I think Grant can hold up reasonably well hitting their LBs on the second level while also presenting a much scarier downfield threat on play action. If they’re really threatened by the run on the strong side, that will make them even more vulnerable to Daje/DJ and company getting the ball in space on the opposite side of the field.

As to the passing game, if we’ve got three receivers and Jonathan Gray on the field that’s plenty of aerial weaponry. Given our concerns about Gray’s blitz pickup, I’d much prefer to have Poehlmann on the field to handle pass pressure and let Gray threaten the defense on screens, swing passes and draws. We could easily run a slide protection when we wanted to with Poehlmann in the game, and sliding out to pick up OU’s overload blitz while getting Gray the ball moving in the opposite direction could be a pretty solid blitz deterrent. I’m fine with letting Hills handle things on 3rd and 8, but since Gray is going to be our primary weapon in this game I don’t want us tipping run or pass by his presence in the backfield.

I’ll say it again – I’m not trying to bag on the guys I mentioned above, and all of them will play key roles through the rest of our Big XII slate. But given the stakes and the particular strengths and weaknesses of OU’s defense, I want to see a lot of Poehlmann and Grant sticking it to the Stoops boys.

Which offensive personnel do you think give us the best shot to come out on top in the Shootout?