This fan has assumed the proper posture, for he knows that crapping a Pygmy intimidates no man.

But not by this man. He is angry, and there is football. But he will not win. He cannot win.

The Other Couch Burners cometh. We are going to be stressed. A large freshman who has memorized three whole Tecumseh quotes is going to take a wrong step. A dentist from Hutto is going to throw popcorn, wrapped in yellow polyester ... and he's going to throw it wrong. The guy next to you is going to tell you we need to put in Trey Holtz. Your date is going to pretend that you have somehow erred, in hopes of extracting some concession later, like a Nigerian poon swindler. Shit, as they say, will happen.

I saw shit happen at a game, once. I was just installing my date in her seat when a tussle broke out at the edge of my peripheral vision. I, therefore, have no idea what the casus belli was. All I saw was two white dudes, who between them had not one full head of hair, pushing each other like anime bunnies, saying "yawannafite? yawannafite?" Plenty of belli, but no casus, was on display.

Now, there is no valid negative answer to the query, "yawannafite?" in Texan, sad to say. Sad, because they were both going to miss the game and wind up together in the drunk tank. In a non-Austin location. Together. Hell is other drunks, as many wise men have said. But that's not what intrigued me. No, my immediate assumption was that this incident was yet another example of a "hostile environment," in which drunken fans think they can intimidate the other team by mixing it up, or pretending to, with other drunken fans wearing the wrong color.

So I consulted the cones in my retinae. Usually, a man doesn't need his cones for much. Rods are generally enough to tell you if the bologna's gone bad, where answer "C" is on the ScanTron™, the difference between blonde and brunette, etc. (Whereas, only the olfactoral bulb can discriminate the difference between blonde and "blonde," and its pathway to the frontal lobes, in the male brain, is obstructed by the scrotum.)

My cones were telling me that, on the contrary, this was orange-on-orange violence, and neither shade of orange could be mistaken for a traffic cone. Both men wore a hue between clay and pumpkin, and yet here they were mixing it up for ... well, nothing that I could see.

It seemed odd, two Longhorn fans fighting at an away game. I'm not going to lecture you on the bonds of fraternal love, since you learned everything you needed to know about that from the men's room stalls under the Old Music Hall. On the walls, I mean. I'm talking about writing. Mere words. Anyway, it seemed odd, when the Texas Longhorn football team is in their away uniforms, running around like a bunch of Mormon astronauts, for two sons of the 40 Acres to lock, as it were, horns.

Alcohol is a boring explanation. I'm not someone's lawyer and I'm certainly not trying to sell anyone on sobriety, any more than someone with anterograde amnesia could sell you on a Glorious Five-Year Plan. What?

But the last time Texas played a couch-burning team, it wasn't pretty. It was beyond Huskers serving Longhorns shots of chilled urine, or aggie spoiling for a fight and then freaking out when he gets one. It was fights and freakouts and keyed cars and post-debacle bonfires (not the good-natured kind) and lots of ugly rust-belt chicks and jorts and you get the picture.

No one needs to remind Texas fans to kill visitors with kindness. We live for that. Welcome to your favorite vices, O Visitor Supporter, and pray you hoover your fill. Hope you took your pre-game antacid. And pro-biotic. And lots of fiber. And antihistamine. And beta-blocker. And Xanax. Here's enough alcohol/cholesterol/fukitol to choke a goat, so have two. Try the cobbler!

And anyway, I suspect most of the Mountaineers that we'll see on Saturday probably hail from ... Austin. Or maybe Grand Avenue Parkway. So stow the "welcome to Texas" whipout, you are not aggie. You are a special type of creature, one that can walk on grass. Austin isn't really a city, so there are no Austinites, just wayfarers in a white glow of befuddlement, in transition to the unknowable from the unnecessary (or else Plano) on a platform helpfully attended by Morgan Freeman. Even our Formula-1 track looks like a bong from the air, our answer to the Nazca Lines, intended to screw with the minds of anthropologists and bad-hair-day documentary guests for centuries to come. 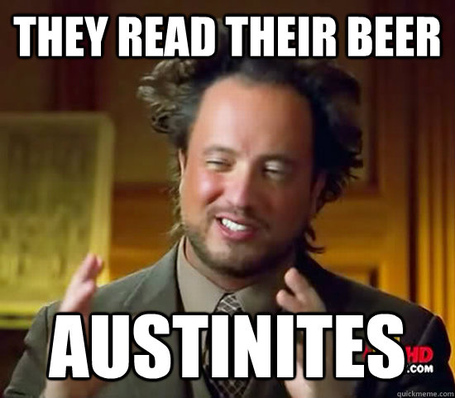 You can't be sure you're in the "Austin" portion of the Boltemplegeorgeroundraustibukylemarcosantonio Macroplex until you hear people using words like "conscious" and "intentional" in ways that make you want to intentionally knock someone unconscious.

... which brings me to my point, to the extent that I have one. You've heard what happens to men in prison, but what you may not have anticipated is that they'll make you wear the wrong shade of orange, the whole time.

Why do guys hold their arms like the love interest at the end of Altered States when they bow up like a horny walrus? That's not going to make anyone look like they can bench press a Yugo. It makes them look like they need to crap a Pygmy. I have T-shirts that are older than Dalton Santos. No one is afraid of me, or if they are, they're more likely to shoot me than fight me. Come gametime, and certainly come trudge-back-to-the-truck time, alcohol is taking up the enzymes in everyone's balls (when present) that make testosterone. Our adrenals, therefore, are working as hard as they can to make up the difference, because homeostasis ain't just a Black Irishman in suspended animation. We are awry.

Tomorrow's game is going to make the 1999 OU game look like the third-place match in the International Bocce Ball Tournament. Unless someone plans on stripping down to fish-belly and leaping past the donut monsters, there is nothing we can do to affect the outcome.

"Gentlemen, there's a hell of a fight going on out there. Why don't you get in it?"

Darrell Royal is not. Talking. To me.