Optimizing Texas Longhorns Football: Is Mack Brown the right man for the job?

The landscape of college football and its attendant media is changing rapidly. Is Mack Brown the right man for the Texas job after this season?

Share All sharing options for: Optimizing Texas Longhorns Football: Is Mack Brown the right man for the job?

I've spent much of this season advocating a ‘take things at face value' approach, and focusing more on the on-field, X-and-O happenings than speculation about what kind of high-level changes may or may not go down at season's end. On November 30th in the Year of Our Lord 2012, though, the story of this season has been pretty much written. We may well see a dramatic road upset on Saturday that puts some wind beneath Mack's wings, but our contest with K-State is far more likely to be a study in Derp-ology under center than it is a stirring victory from an 11-point dog. With an 8-4 regular season looming and a bowl matchup/outcome that's likely to land somewhere between ho and hum, I find I'm much more strongly driven to take a look at the big picture and get prescriptive about the shot I'd try to call in the here and now if I were a Big Cigar.

Both Good.Shepherd and Scipio have graced us with some expansive and thought-provoking pieces on the present and future of our head coaching position in the context of college football's changing landscape. I had replied to Good.Shepherd's Monday ‘Rational Take' piece with some prescriptions, and Sailor asked me to blow that out into a main post. That's what I'm doing here, with an opening digression around how that changing landscape impacts our program's ability to sustain a competitive advantage.

Good.Shepherd has framed his pieces from a strategy consultant's point of view. Not being innocent of strategy consulting myself, that thought process appealed to me and kept me harkening back to what I suppose is the ‘classic' strategic viewpoint on how an organization gains and sustains competitive advantage. With a lot of interesting conversation happening around exactly what is and isn't a ‘natural advantage' for our program, I thought it would be useful to delve a little deeper into how we define things like advantages and resources.

For those unfamiliar with Michael Porter, he's a Harvard B-School prof who has published a series of widely-read books on corporate strategy. Below is a diagram that Porter uses to illustrate his view of how corporations ultimately create value: 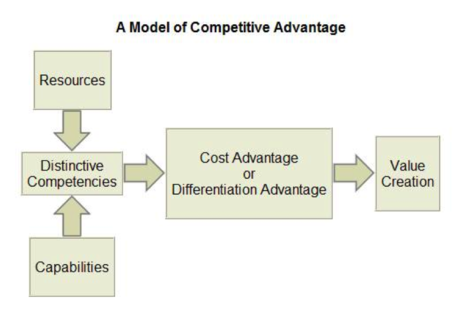 A lot of the things that have been discussed as advantages for the Texas program (money, location/proximity to recruiting hotbeds, facilities, alumni base, program history/cachet, flagship status, demonstrable NFL pipeline), I think Porter would define as resources, which are simply assets that are both useful for CREATING an advantage and difficult for competitors to acquire or emulate. In Porter's world, resources are things internal to the firm (e.g. patents and trademarks, proprietary know-how and brand equity). For a football program, many of its resources are internal but the most important by far - recruits - start out external and (theoretically) available to all. Obviously, converting recruits into internal resources - players who have signed on the line that is dotted - is a vitally important task. But resources by themselves don't win anything.

The other half of the input equation is capabilities - essentially, your ability to utilize its resources effectively. Your capabilities are embedded in what your organization does every day, and in this context we're pretty much talking about the knowledge, skills and abilities of your coaching staff. Utilizing these capabilities to effectively exploit your resources creates the competencies that give you the advantages you need to create value (wins).

Before we turn this into an Evening MBA course I'll wrap up this portion of the proceedings, with this thought:

Key Takeaway #1: Resources alone create no advantage without the capability to exploit them.

If some of our resources - and make no mistake, Texas takes a back seat to NO ONE in the resource department - have failed to yield advantage, that does not mean that they are ephemeral or valueless. Geography, money, facilities, history, program/brand cachet, a demonstrable pipeline to the League - these things are real. These things are good. And while some of them could potentially erode over time, they ain't eroded right now.

We don't have a resources problem. We have a capabilities problem.

So what's the best way to solve it?

Winning in the Brave New World

Good.Shepherd's ‘No Country for Old Coaches' series has done a terrific job of highlighting the rising tide of changes in the college football landscape. I won't re-hash them all here, but to my mind there are four critical realities that the elite programs of the next 10-20 years must master.

Schematic Innovation: The current pace and impact of schematic revolution in college football is unlike anything we've seen since the advent of the Wishbone - or maybe the Wing-T. While things may settle down into an ‘everyone runs the spread' state of parity, I wouldn't want to bet on it. While this doesn't mean your head coach has to introduce the Double Barrel Shotgun or bring the A11 offense to college, your staff damn well better be able to understand, process, counter and adapt to state-of-the-art X's and O's. Resource-rich Fast Followers can succeed, but those consistently behind the schematic curve will be ruthlessly punished.

The Rise of Super-Conferences: A state of play with four 14-to-16 team super-conferences seems to be the most likely outcome when the realignment dust finally settles. The SEC has provided the scheduling model most beneficial to keeping your top teams highly ranked, and it's the one I'd expect the other big conferences to emulate - especially as the attendant playoff model evolves.

Playoffs? You Kidding Me? Playoffs?: The four-team playoff is already here. Eight will not be long in coming, and with four power conferences demanding AT LEAST two entrants apiece into the tourney I think things ultimately stabilize at a sixteen-team playoff structure by 2022 or so. Even at eight teams, the playoff will become THE focal point of the college football conversation - success or failure on that stage will be the currency of relevance as an elite program. That means winning multiple matchups against similarly-talented programs who reside at the schematic forefront of the game - blow your first-round matchup, and your ten-win season is no longer relevant to the conversation.

Brand Management in the 21st Century: There's probably a big post or a series of posts to be made on this topic, but I'll grossly over-simplify to amplify a key point. While the hydra that is ESPN will continue to dominate the CFB media landscape for the foreseeable future, the rise of everything from smart, school-focused blogs to social networking to Twitter means one very important thing: the vast, vast majority of the conversation that's happening about your brand is taking place without your control, oversight or intervention. Even a program with an unparalleled resource like the Longhorn Network lacks the ability to effectively shovel against the tide should the market deem us to be old, or stale, or soft, or whatever the opposite of trill might be. That's not saying the LHN is valueless, but it's to convey the sheer impossibility of a slick-talking head coach with good mic skills somehow out-shouting the market entire market to convince them that your program is ultimately defined by ANYTHING but big wins against quality opponents. If you want to think of the head coach as a CEO and steward of your brand, he'll be better equipped if he came up through Operations rather than Marketing.

Key Takeaway #2: Relevance in college football will be increasingly determined by succeeding in a crucible of similarly-talented, strongly-coached and schematically diverse opponents - beating up the weak will be a table stake, not a selling point.

As long as we've all hopped aboard the Gross Simplification Train, let's say that the four most important capabilities of a head coach at an elite program are:

Schematic Currency and Insight (staying near enough the forefront of relevant schemes to provide guidance, ID problems and devise overall and opponent-specific solutions)
Recruiting Ability (identification, evaluation and acquisition of elite talent)
Program Organization and Optimization (creating and maintaining a framework of effective practices, opponent analysis, S&C, etc.)
Politics and PR (interactions with big donors, use of LHN as a vehicle, etc.)

Let's think of each capability on a five-point scale, with a 5 representing one of the top 5 coaches in the nation on that attribute and a 1 representing a significant deficiency. I would score Mack over the course of his time at Texas thusly:

If you buy the argument that Mack has been one of college football's most successful coaches over the full course of his tenure - and it's hard to make a strong case otherwise - then let's say Mack's 12 Capability Points are a reasonable expectation in a new hire. Could we land one with more capability overall? Sure - and I hope we do. But prioritization is always an interesting exercise, and far more so when you're not working with an unrealistically broad resource base.

Based on my view of our resources, the coming CFB landscape, and what needs to flow from the head man versus what can be picked up by the assistants, the athletic department and the by-God-LHN, my minimum standards for each capability would be:

Can Mack deliver vast improvements in schematic currency and some improvement in Organization and Optimization at this stage of his career? Literally nothing in his biography suggests that he can. That, and his age and likely energy level, indicate that change is both inevitable and vital. The question becomes how and when Regime Change occurs, and whether our results in 2013-2014 and their attendant impact on our future fortunes are likely better with Mack at the helm or with a toss of the dice for a new head man.

I'd argue that however you feel about our team's talent and capability, there is so little in Mack's biography and skillset that speaks to optimization that our chances of making the right hire outweigh Mack's chances of being our best option in 2013.

Thus, if I was one of our reputed ‘Big Six' Big Cigars and had tangible input into our future, I would make the strongest possible push for Mack to retire after the KSU game and marshal all of our resources towards finding the candidate that met or exceeded the attributes that our program needs in its head coach.

Key Takeaway #3: You tell me. Would you push for immediate change? How hard? And how would you allocate capabilities to create the candidate you'd be satisfied with making the next head coach at the University of Texas?