By either statistical measure or film viewing, it's apparent that Oregon State is a difficult draw for Texas.

There are any number of reasons for Texas fans to be nervous about our upcoming encounter with Mike Riley's Beavers. There's the fact that they run a fairly tradition pro-style offense that utilizes positions like TE and FB and offers variety in the run game (even if they don't do it exceptionally well). Then there's the fact that most of their players haven't had the chance to play in a bowl game and will now have an opportunity to take on famous Texas in primetime.

Today we're going to talk about their defense, which is the strength of their team and the real concern for Mack's hopes of doing one win better than last year.

The DC is Mark Banker, who's of the "bend don't break" tradition. His teams resemble Bill Young's OSU teams in that they prioritize speed and athleticism in the back seven which Banker protects with a 354 pound islander at nose tackle (# 98 Castro Masanai) and a DL that goes 263-354-294-265 overall.

Their philosophy is 2-deep, base defense on 1st and 2nd down followed by 3-4 Fire Zone-heavy packages on 3rd down and long, much like Young's OSU team. We'll examine how they approached Stanford but allow me to present the results of their efforts this season in terms of Huckleberry's adjusted stats.

In terms of per play averages, they are the 15th rated pass defense, 29th rated rush defense, 9th rated points allowed defense, and 11th rated turnover defense. They also rank 10th on 3rd down but only 93rd in Red Zone defense.

They typically get there by simply being difficult to generate big plays against and not through high numbers of tackles for loss or sacks like Diaz's better units. Generally this is true of teams that look to line up in a 2-deep shell on 1st and 2nd down. You typically lack the numbers to build a wall at the line of scrimmage but rely on the athleticism of your back seven to pursue the ball and reach the carrier or the pass before too many yards have been accumulated.

What's particularly interesting about Banker's Beavers is where that pursuit comes from. They will mix in Cover-3 and Quarters coverage to handle certain offensive formations, but classic Cover-2 is a big part of what they do. 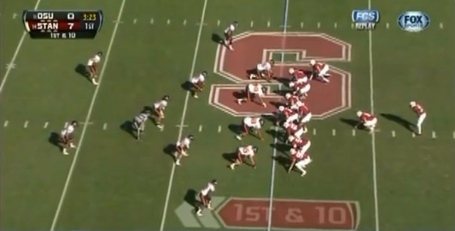 In classic Cover-2 (as opposed to the 2-read coverages that dominate the Big 12), the safeties split the deep field in half while the linebackers and corners split the short field into five parts.

The linebackers are stacked behind defensive lineman to protect them from directly taking on blocks. The OSU linebacker corp runs 225-248-205 and the outside backers are built more for pursuit and coverage than filling interior gaps. Because the safeties are responsible for keeping the ball in front of them, they do not have run responsibilities.

Instead the corners have run responsibilities to force inside runs back into the linebackers. 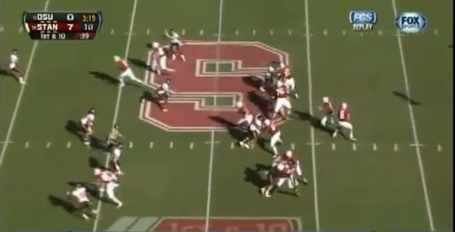 Part of the genius of the Shaw/Harbaugh "Power-Coast offense" is that it attacks you with vertical pass concepts from power-running formations, much like Harsin's offense. Here Stanford is sending tight ends deep. The important thing to note is the positioning of the corners on the top and bottom of the screen. They are sinking back after realizing it's a pass play to tighten passing windows on vertical throws, but they are run defenders with eyes on the backfield.

The prevalence of Cover-2 in Oregon St.'s approach is demonstrated by the fact that their corner Rashaad Reynolds is the team's number two tackler. The other corner Poyer has seven interceptions on the season and seven more pass break-ups. Their safeties Murphy and Zimmerman are 3rd and 4th in tackles with only two and half tackles for loss between them.

Texas can expect to see a lot of Cover-2 from Oregon St. while in big formations. They do not see this very often in the Big 12. For a defense in our league, classic Cover-2 with "cloud" run support from the corners is not a formation you want to employ against the possibility of Tevin Reese and Terrance Williams both running deep routes on the same side of the field against one hapless safety. Teams utilize it occasionally to the boundary side of the field but not frequently as a base coverage.

It will be important for Ash to be careful on sideline routes because these corners are ball hawks playing in zone. An interception on a jumped comeback or hitch route is the most likely to result in a pick-6.

So where are the weaknesses in this defense? Oregon had success running pin'n'pull to the boundary, however that will involve Texas handling their defensive ends and linebackers with their tackles and tight ends, which hasn't been consistent this year. Ultimately, the corners are not a weakness in OSU's run defense.

The real weaknesses are the middle of the field in coverage against the middle linebacker, who in this instance is not great in pass coverage, or on deep routes with two deep receivers on the same side of the field. Texas' "flood" concept in which Shipley runs an intermediate out, a back runs a swing route, and Mike Davis runs a deep post is intended to target linebackers who have to cover large areas of shallow field in 2-read or Cover-4. Against a Cover-2, Texas relies on Ash making the right read and an accurate throw against very good Beaver corners.

Instead concepts that flood the intermediate and deep zones like "4-verticals" from big formations with Shipley or Macfarland running down the deep middle could force OSU into Quarters or Cover-3. From those coverages, OSU cannot bring their corners against the outside runs and shallow throws. Whether or not Texas can accomplish that or how they approach handling OSU's coverages will tell us a great deal about how Applewhite gameplans as well as how our inside receivers and passing game are coming along.

The smallish OSU linebacker crew will be hard to exploit given their enormous nosetackle and Texas' struggles to impose their will on good defensive run fronts. Should Texas be able to move the ball throughout the game, OSU could be susceptible to the downhill running game and Joe Bergeron late, but Texas will have to "earn the right" to accomplish a power run game results.

Overall Oregon St.'s defense will be one of the better units Texas faces this season. Ash was brilliant in Texas' defeat of the similar Oklahoma St. squad in Stillwater, but generally Texas hasn't handled teams with strong defensive ends and athletic secondaries very well. If the Diaz defense performs predictably terrible against OSU's 2-back offensive sets and vertical passing game, it'll be important that Texas' offense grows enough in bowl practices to consistently put points on the board against Banker's defense and enable a shootout victory.

Suffice to say that preliminary scouting reveals a tough matchup for the Texas Longhorns.