I recommend this documentary if you're a fight fan or if you just appreciate good documentary film making.

The recent death of famous boxing historian Bert Sugar - iconic cigar clenched in his teeth; cocktail glued to his right hand; smart fedora set slightly askew suggesting just the right mix of cynicism; rumpled suit with loosened tie; pockets spilling a stubby pencil, a flask of hooch, a note pad, a racing form, and a case full of business cards claiming O'Reilly's pub in New York City as an office-in-exile - where he would clack out his boxing columns in a smoky booth with a floor covered in wood shavings - reminds us a of bygone era now mostly forgotten, when men like Sugar - rumpled characters who smelled like bad cigars and liniment - were common, and boxing and its heavyweights ruled the world. 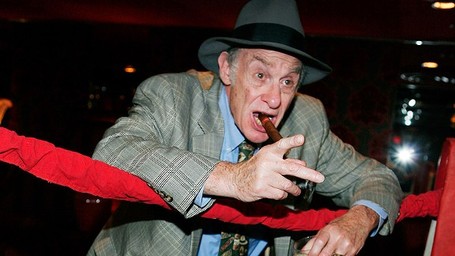 Ask a man who the heavyweight champion is today and you'll get a series of stutters. Ask that question between 1900-1990 and you'd have a detailed recounting of who he was, his path to the championship, and the top five contenders.

It seems that everything has been written or said on the subject of an iconic figure like Muhammad Ali, but Facing Ali reboots the familiar tale by telling the Ali story through the eyes of his opponents. That approach frees the film from honoring the Ali mythos in the conventional ways and spares you listening to Norman Mailer or some other tangentially related famous blowhard babbling about Ali's effervescence and how they uniquely related to his spirit and understood him like no other man. Instead, we talk to men who knew Ali in ways that hangers-on never will. Men who stood in front of his fists and tried to take away his will.

We see Ali through the eyes of fighters: tactical, full of ego, impressed but not always awed, gifted with real insight because they - like Ali - were one of only a score of men on the planet who belong to the same fraternity that he did. This is a documentary about small moments of insight, the nature of the men who dominated the fight game, and the times themselves.

The documentary runs chronologically, beginning with a young Ali (he turns professional at age 18 after his gold medal in Rome and a 100-5 amateur record) facing his first major test in English working class hero Henry Cooper. Want to win a bar bet? Offer that Ali was nearly KO'd by a white 185 pound Englishman and then fleece the takers. Then Cassius Clay, Ali is 21 years old, cruising through tomato cans and an old Archie Moore, and already thoroughly convinced of his own invincibility. In a tune-up for the Sonny Liston heavyweight title match, he agrees to fight the smaller Cooper in front of his home crowd in London. Ali clowns, gets into some ill-advised exchanges, and is absolutely leveled by a perfect hook at the end of the fourth round.

Ali is badly hurt there and was probably saved by the bell. He was also forged into the fighter we know now. It illustrates the learning curve of a young heavyweight and Ali's incredible toughness, recuperative powers, and mental strength. In the next round, he destroys Cooper - opening up cuts that require 80 stitches to close.

Later he complains that the hook "hit him so hard that it hurt his relations in Africa."

It also punctures the myth of the indestructible Ali. If that fighter ever existed, it was likely during his ban from boxing. The real Ali was beatable, which actually made him all the more impressive and relatable. Ali was a triumph of will as much as skill.

Then Ali - an unbelievable 8-1 underdog - beats Sonny Liston, wins the title, and goes on to face the documentary's most charismatic and heartbreaking figure, Canadian champion George Chuvalo.

The Canadian heavyweight, unlike many other fighters in the documentary, still has his faculties and full use of speech (the unstated commentary on boxing itself; you should enable English subtitles when you watch this film) and he matches Ali's flair: after Ali dismisses him as "a washer woman", Chuvalo crashes an Ali press conference wearing a dress and lipstick brandishing a contract (the documentary shows this, with Ali regarding Chuvalo with admiration for his showmanship and a chuckling "this white boy crazy" look); then offers an insider's account of how his fight only came to be only after Ali's NOI bodyguards beat a Mob connected promoter nearly to death. The levity ends with Chuvalo's tragic recounting of his son's heroin usage and wife's suicide.

Tragedy and hardship gives birth to fighters and never leaves them.

Ernie "What's My Name" Terrell fights Ali in 1967 and accuses Muhammad of winning by thumbing his eye. The footage is suggestive but inconclusive. Terrell appeared on the Ed Sullivan Show two nights before the fight to do a song and dance performance promising to rearrange Ali's features. Different times.

Ali's three year boxing ban for refusing to go to Vietnam follows. Ali is 25 years old - at the peak of his physical powers but bloodied just enough to have learned caution - and must sit on ice until Age 29. This is the Ali we never knew and we can only imagine how good that fighter was.

Joe Frazier supports Ali during his ban, loans him money, and then feels betrayed as Ali portrays the rough-scrabble, darker skinned Frazier (who grew up in much tougher circumstances than Ali) as too dark to be pretty, a flat-nosed gorilla, an Uncle Tom. You find yourself smiling at Ali's masterful taunting and fight hype while simultaneously wincing at how incredibly destructive his message is. It's hard to reconcile that stage of Ali's life - a NOI mouthpiece who had turned his back on Malcolm X when he exposed Elijah Muhammad as a egomaniacal lunatic - but also a jovial, warm-hearted, and big-spirited personality who didn't have hate in his heart for anyone. It's an odd juxtaposition between Ali the man and the philosophies he championed (opposed MLK's desegration movement; his incessant NOI boosterism and apologia) and the film deserves respect for exposing the contradictions and assuming the viewer has enough intelligence to reconcile it themselves.

The documentary's funniest moment actually stems from Ali's taunting of Frazier, as told by George Foreman. "Man, George - Ali calling me an Uncle Tom. That's just wrong. I can't have my wife thinking I'm sneakin' around peekin' in windows."

The film doesn't really lose pace, even as Ali's greatness fades: you're introduced to Earnie Shavers (one of the hardest hitters of all time) whose family must flee the Deep South when the Klan comes looking for his father; Ron Lyle, convicted of 2nd degree murder who did 1000 push ups a hour in jail, and, of course, George Foreman, whose take on The Rumble in The Jungle is honest and fascinating. You also meet the underrated Larry Holmes (skinny arms, skinny legs, slicing jab, never really forgiven by the public for beating up Ali), find out from Ken Norton that styles really do make fights, and then there's Leon Spinks. Oh, Leon. Good Lord, Leon. The movie ends with a tear-jerking closing moment as Frazier reflects on Ali's current condition, his bitterness now blunted seeing his great rival crippled by Parkinson's.