What do our best NFL players tell us about the Longhorns over the past decade?

According to Texassports, the Longhorns currently have 43 players on active rosters in the NFL. That's 3rd best of any college program. What would an All-Star team solely comprised of those Longhorns look like? Could they make the playoffs? And what might it tell us about our program as a whole?

The rule is simple: they have to be on active NFL roster. No free agent fantasy thinking, please. So, please feel free to play along with your own submissions, corrections, opinions.

First, let's tackle the defense. I'm choosing a 3-4, because it best suits our personnel, despite all of these guys playing in a base 4-3 in their college careers.

My front line is going to be a rock against the run. Steeler legend Casey Hampton anchors my 3-4 defense while dependable veteran Cory Redding provides stout run stopping from his DE position. Raider Lamarr Houston provides some pass rushing ability. The primary purpose of these three is to kill the run, freeing my OLBs to rush the passer. Brian Orakpo and Brian Robison are my blitz brothers and they'll combine for 25 sacks on the year. Henry Melton is my #1 pass rusher off of the bench, Sam Acho is a capable NFL OLB, and Shaun Rogers can still give me 10-15 dominant snaps a game before he tires (and then you can steal his jewelry).

My depth is really damn good up front. Linebacker is another story.

One ILB spot is manned capably by Pro Bowler Derrick Johnson, who will excel between the tackles, as a zone blitzer, and in zone coverage, while the other linebacker spot reveals the shaky state of Longhorn LBing over the last decade. Muckelroy is a solid NFL back-up (after starting a season for the Bengals two years ago) but the quality of my front five and Johnson shields him from too much scrutiny. We're razor thin here, with unproven commodities like Keenan Robinson and Emmanuel Acho backing up my ILBs. Not happy about it.

My defensive backfield will feature the best safety duo in the NFL, great depth, and serviceable starting cornerback play. Quentin Jammer and Tarrell Brown are both strong, veteran, NFL starters who will excel in zone coverage if we don't hang them out too often to dry at cornerback. Fortunately, we're going to shield them with elite players Earl Thomas and Michael Griffin over the top and an array of zone blitzes featuring Orakpo, situational sub Melton, Johnson, and Robison.

Overall, this Longhorn All-Star defense is really damn good - with six high level to elite level players in the starting eleven, four above average pros, and only one subpar starter. Depth is good everywhere but ILB.

And that reflects where the talent has been for us over recent years. 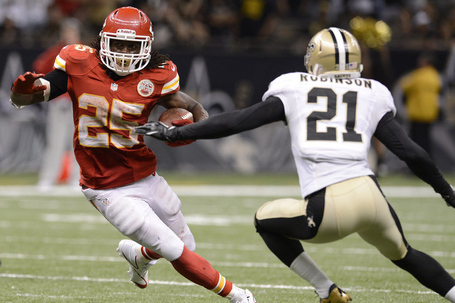 Backup 49er QB Colt McCoy is our starter and he's going to need all the mobility he can muster. Because he'll be throwing to Jordan Shipley and Redskin offensive coordinator Kyle Shanahan. That's right. The Longhorns - in an era of spread offenses - have one NFL receiver on current rosters. And Shipley is a Number 3 receiver, at that. The good news is that Kyle Shanahan is a LITERAL COACH ON THE FIELD and can still run a 4.95 40. TE Jermichael Finley should expect some double teams, I'm afraid.

Veteran Cedric Benson is a plodding change-up for the elite and explosive Jamaal Charles who will be running behind a line of seasoned Longhorn veterans, who are mashers in the running game and rather questionable in the pass protection since Blalock isn't a true NFL OT and Hills has seen his better days. Still - we'll be good at converting 3rd and 1!

Justin Tucker will be asked to kick several 50+ yard field goals in order for this offense to find the scoreboard.

Sadly, this team won't make the playoffs, despite leading the league in most defensive advanced metrics. The offense is a two ton anchor.

A fun exercise and another way of pointing out the gross disparity between our offensive and defensive recruiting and development at Texas over the last ten years (particularly the last five).

Groundbreaking information it is not, but hopefully a fun lens through which to view it. We miss you Greg Davis.

Any quibbles? What would you have done differently?