Share All sharing options for: The Texas Pregamer: Kansas State 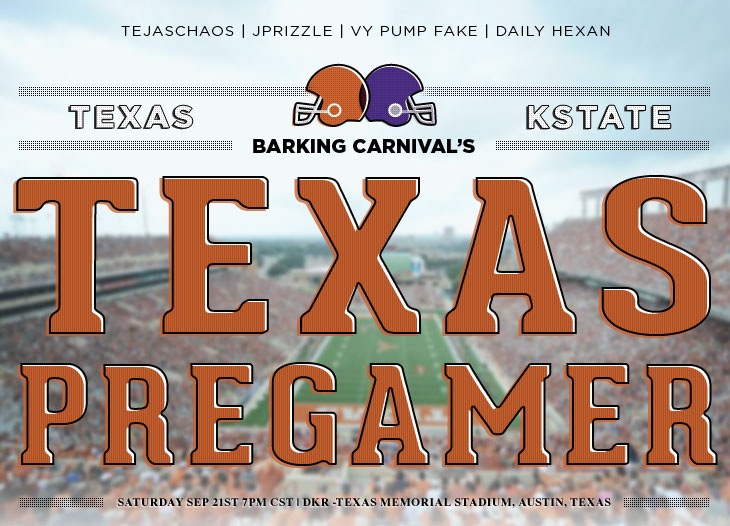 When you write a preview like this, words don’t come easy after a loss. So you find a better writer, borrow his format, and start it off with a distracting joke:

Stop me if you’ve heard this one - How many Aggies does it take to play defense? More than 12. Haha. Ha. Ha…

Here at the Pregamer, we are what we like to call numbers guys - as in, we can name several numbers. Forty-Nine Points allowed. To an SEC team. Adjusted for Big 12 inflation, that’s something like 84 (a Baylor Dozen).

Don’t believe us? We Stephen Hawkinged up a formula to convert SEC points to BIG XII points, we call it the SEC to BIG XII Points Conversion Formula. What, you wanted something more creative? Screw you, Texas is 1-2.

This is the closest most Sigmas ever get to a formula. ZING!

When you write a preview like this, you’re gonna want to avoid hashing through the weeks before. It’s best to move the topic forward and focus on the next week as fast as possible.

Numbers aside, it’s football season y’all. Pre-season (out of conference) is over and Texas is ready to start playing with the 1st stringers. The team is fully prepared to defend home field and a pristine, immaculate, untouched and undefeated conference record this weekend at DKR Texas Memorial Stadium. First up is a foe that we would never dream of trifling with. Yes, the Kitty Cats are coming to town.

When you write a preview like this, you Google references of various kinds of wizards. Dumbledore. Oz. Pinball. Tim. Cause everyone says Snyder is some sort of wizard. We read that somewhere.

We most definitely will.

Yes, The Mauve Merlin and Son are headed back to Austin. You could say he’s going to conjure up quite the game plan. But has he run out of rabbits in his hat? It’s hard to beat a team 6 times in a row after all. Yes, they lost to North Dakota State. But wait – that’s no ordinary FCS upset. North Dakota State is actually so good that ESPN Gameday will be in Fargo this weekend. We GUARANTEE you, if Texas was playing Delaware St, Gameday would not be in Austin.

When you write a preview like this, it’s important to focus on making a few jokes, cause honestly that’s easier to face than the ESPN ticker. And deep down, you just want to win one. Especially this one. It’s been so long. You wonder if it’s time to pack up The Pregamer and start the countdown to next year.

You never run out of good name material with a Snyder team. JUCO FTW. Here’s a few more players to better know:

LUBBOCK, Texas: Local hero and Texas Tech AD, Kirby Hocutt, made the news by finding three missing children of the Big 12 reffing crew that officiated Tech’s narrow win over TCU. Coincidentally, the three had gone missing sometime between the beginning of the fourth quarter and when the head ref took that random phone call before the replay review.

STILLWATER, Oklahoma: OKState spent the weekend taking advantage of a helpless team whom they lured to Stillwater with a cash payday. Afterward, they beat Lamar 59-3.

HOUSTON, Texas: The Kansas Jayhawks lost to Rice 23 - 14. We only mention this because we didn’t even know it happened till we just looked at the schedule and thought it might be worth pointing out. CAUSE KNOWLEDGE IS POWER.

COLLEGE STATION, Texas: Johnny Manziel hits North Gate on the prowl for condolence tail only to come down with a cold. Across campus, Mike Evans catches it. The Evans catches everything. It is known.

Purple Kansas here. Your friends at the north end of the Chisholm Trail. That weird school in purple that has somehow won as many Big 12 championships as Mack Brown.

You seem a gloomy bunch, but that's understandable. Mack looks overmatched, again. Not only did he fire his defensive coordinator, he replaced him with Greg Robinson. Your linebackers can't tackle their girlfriends. I think I got the gist of that post right. Case McCoy may run your offense on Saturday.

Speaking of Case, we may need to change Chisholm Trail Rivalry to Nepotism Bowl. McCoy replaces McCoy, Shipley replaces Shipley. If Bill Snyder has his way, this special-teams coordinator will replace him.

We're not without our own issues, Texas. Our defensive line gets less push than a newborn. Our linebackers were apparently given Nike's new extra-heavy concept shoes. We have a defensive back who got picked on by Louisiana-Lafayette. I don't know if anyone told you, but we lost to North Dakota State. My guess is that most of you just assume North Dakota is somewhere around Antarctica.

Put BYU and Ole Miss and We Own Texas aside this weekend. I'm not surprised you don't expect to win. But I won't be surprised if you do.

It may not seem like it, but October 4th is just around the corner. So don’t wait until the last minute to buy that special someone a Kansas State Victory 10th Anniversary gift!

Ahh 2003, I remember it like it was a decade ago. To honor the occasion, we at the Pregamer are proud to announce a commemorative tin plate. This one of a kind piece features starting quarterback Chance Mock, and an honest to goodness signature we totally didn’t borrow from Amazon (30% OFF TOO).

Supplies are limited, so get your orders in now: 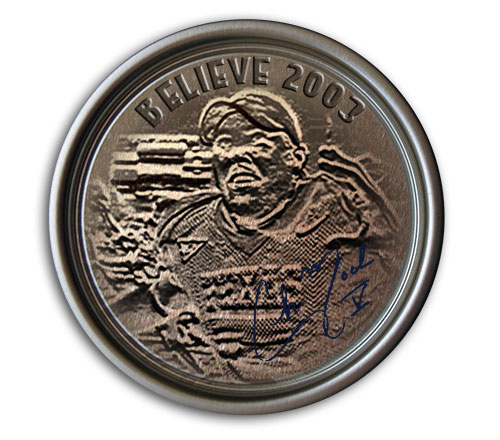 TejasChaos: Cloudy with a chance of Purple Haze coming in late from the north.

Daily Hexan: I hate K-State. Not like I hate a rival. Like the hate other inmates have for pedophiles. They’ve even caused me to hate Jordy Nelson, who stands for everything I believe in. Case proves he can be just as good as a FCS QB. Texas 27 -24.

I think we finally figured it out: