More X's and O's than Tic-Tac-Toe.

There's no getting around it - the doldrums of the offseason are in full swing.  The Spring Game has long receded into the rear view mirror, and we've got a hot hazy summer ahead of us before the Horns get back on the practice field in August.

But neither the real Charlie Strong nor Charlie F'n Strong would countenance simply sitting idle during these hot summer months. He's had the team grinding from the moment he set foot on campus in order to break it down and rebuild it into something better. Even with classes dismissed, every Longhorn who wants to stay in the two-deep will be putting in time to get faster/stronger/smarter/better before August rolls around.

I say it's time for us to do the same.

Welcome to Barking Carnival Boot Camp. Over the next couple of months, we're going to take a deep dive into the fundamentals of football. We're going to break down schemes, techniques, terminology and concepts to create a broad and deep knowledge base, with an eye towards more fully understanding the stuff we see on Saturdays.

My thought is to start with some pretty basic and foundational stuff and build up to advanced breakdowns of schemes and systems on both sides of the ball - both things we'll expect to see from Texas in the fall as well as schemes favored by Big XII opponents and other top programs.

I'm envisioning that the initial content will be stuff that just about EVERYBODY knows, and if things are basic to the point of boring don't hesitate to prod me and I'll pick up the pace. But there's a reason I want to start with the basics. There's a feeling that I've frequently gotten when I'll follow some schematic stream to the headwaters of sites that are pretty much coaches talking to coaches. I'll open up a thread on, say, zone blocking, and immediately read something like:

tog describes the zone style we use as POBA frontside bucket back side.

And the "Buhhhh????" feeling kind of sucks. If I've got the time and the inclination at that present moment, I'll start to wade through subsequent posts and through some combination of inference and inductive reasoning I'll (sometimes) finally say "Eureka! I know what he's talking about there - gee, that wouldn't have been too hard to understand if it was written in plain English!" That's no indictment of those guys - jargon tends to evolve in most specialized fields as a time-saver, and there's no reason for coaches talking to other coaches not to deploy jargon liberally. But it's a damn headache for the uninitiated, and the problem can compound when some folks in the business of "pro-sumer" football commentary get more interested in communicating the message of "I know a lot about football" rather than the message of "this is what I'm fucking talking about."

All this can lead to smart, avid football fans - especially those without a high school-or-later playing background - missing pieces of jargon here or there. Then they spend too much time wondering what the hell a writer or analyst is talking about rather than having a simple concept click for them, and may feel like a jackass for asking when in fact a bunch of other people may have the same damn question. And that's no kind of fun.

So my plan is to err on the side of simple at the start as we build up a common framework. Questions, feedback and insights from all of you guys will make this project immeasurably richer, so please fire away with whatever ya got.

In honor of Charlie Strong, I figured we'd start on the defensive side of the ball with a look at basic coverage schemes and assignments.

I've personally always thought about defenses starting at the front and moving backward, and if I'm given the choice between an A-grade defensive line and a C-grade secondary or vice versa I'm taking the stud D-line every time. With that said, defensive schemes tend to be built back-to-front because who's doing what in coverage determines what you can do with your front in terms of alignments and assignments. So let's kick things off with a high-level look at some basic elements of coverage. We'll begin with a pretty standard 4-3 alignment with two high safeties (click image to embiggen): 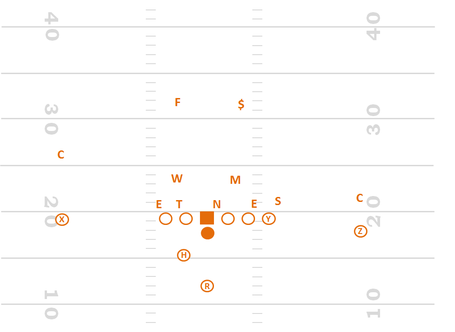 Upcoming posts on Defensive Front Alignments/Assignments and Coverages will go into more depth, but as a big picture overview of what we're looking at:

- It’s a 4-3 alignment with the defensive line aligned in an Under front. That is to say, the 3-technique defensive end tackle (T) is lined up to the opposite side of the formation from the run strength (which is typically defined by the tight end).

- Our corners ( C) are matched up with the opposing wideouts, with one capable of pressing/jamming the wideout and the other aligned in more off coverage.

- Our free safety (F) and strong safety ($) are sort-of-but-not-too deep at 12 yards and splitting the field.

So, what does that alignment tell us about the coverage they're ready to throw at the offense? Hopefully, it doesn't tell too much - defenses that are consistently predictable via pre-snap alignment are defenses that get repeatedly savaged by modern passing attacks. But let's start out with what things might look like if the called coverage is Cover One: 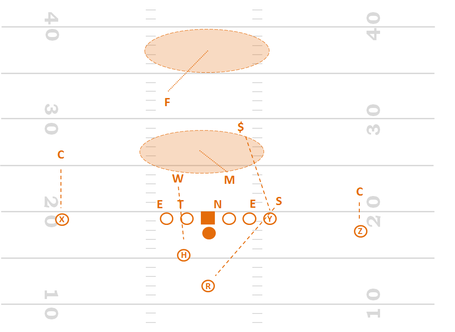 Cover 1, or Man Free, is one of those happy football concepts where the name tells you most of what you need to know. There’s one man (in this case, the free safety) responsible for general deep coverage (as opposed to being assigned to a specific receiving threat) while just about everyone else has man-to-man responsibility for an offensive player. Our Coverages posts will go into guys’ assignments and techniques in a lot greater detail, but at a high level:

- Just before or at the snap, the free safety is rolling back to the deep middle of the field. From there, he’ll be reading the pattern distribution and the QB’s eyes before figuring out where to break. Blazing speed and smarts are coveted here – demonstrate enough of this kind of skill set and NFL might make you a very rich man someday.

- The corners have the X and Z receivers, respectively, with the strong safety rolling down to take the tight end. In classic Cover One they’ll follow those guys wherever they go, but many nominal Cover One schemes have allowances for man-breaking occurrences like immediate shallow drag routes.

- The Sam and Will linebackers have responsibility for the two backs in the offensive backfield. In practice, from this alignment they’d probably have an assignment like "take the first back out to your side" so that Sam wouldn’t be screwed if the tailback flared out to the weak side.

- The Mike linebacker is the only other player in the back seven without a man-to-man coverage assignment, so he drops back into a middle zone. He should have his head on a swivel looking to cut crossing routes, then deepening his drop to undercut deeper in-breaking routes if he’s not threatened by a cross.

Cover One is basic, but it's easy to learn and its strengths in protecting the middle of the field and allowing (at worst) even numbers in the box mean that it's run everywhere from junior high to the NFL. But let's say you want a little more protection against deep throws. From the same look, it's very easy to run Cover Three: 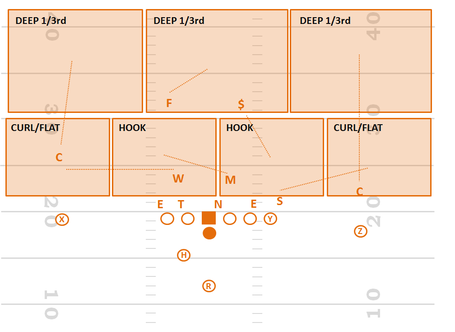 Cover 3 divides the deep part of the field into thirds, with a different player having responsibility for each deep third.

- In this defense, the free safety is rolling to the deep middle just as he did in Cover One, but this time he’s only responsible for a third of the real estate on deep throws.

- The two corners pick up the slack as each takes a deep third responsibility. This usually entails "bailing" back to deep coverage – the corner lined up tight on the Z receiver might be executing a "press-bail" technique where he disrupts the receiver’s release and then immediately bails back into his deep third.

- Most zone defenses divide the underneath part of the field into four separate zones – two curl/flat zones on the outside and two hook zones in the interior. Here, the Will and Sam backers are expanding out to the curl/flat zones once they read pass while the Mike and strong safety are responsible for the hook zones.

Both Cover One and Cover Three are examples of what's called Middle-of-Field-Closed (MOFC) coverage, so named because there's a center-field safety closing off the middle to post routes and the like. If you spent any time on a playground in the 80's, you're likely to be much more acronymically entertained by the alternative style of coverage known as Middle-of-Field-Open. The classic MOFO look is Cover Two: 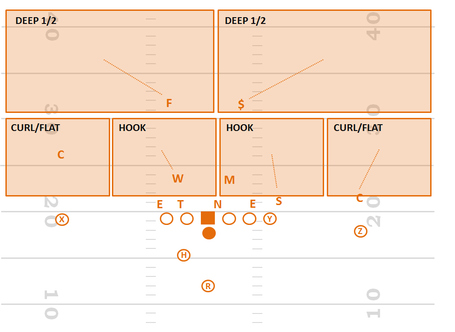 In Cover 2, the deep part of the field gets divided into halves rather than thirds, with the safeties each taking responsibility for half the field. The underneath part of the field still gets split into four zones, and as to who’s manning those zones:

- In classic Cover 2, the corners are the curl/flat players. That means they are much more free to sit on/attack quick game routes like smoke (a simple one-step hitch) and bubble screens, and they will frequently jam/disrupt the release of the receiver to their side before settling into their zone and looking for threats.

- The two hook zones are typically filled by two linebackers – here, the Will and Sam are dropping back to hook zones once they read pass.

- The Mike’s role typically depends on the flavor of Cover 2 that’s being run. In the Tampa 2 scheme made famous by Tony Dungy and Monte Kiffin, the Mike linebacker is the player responsible for protecting the deep up-the-middle seam and preventing guys from running free and splitting the safeties.

So there you go - a high-level look at what guys are doing in some of football's most familiar coverages. I was going to include gap assignments and force responsibilities in this first defensive post, but since this one was already getting a little long I figured I'd save them for the next one. Speaking of next, this is my tentative plan with respect to where this series will go:

Cover One In Detail

Zone Blocking - Inside Zone (from the mouth of Joe Wickline himself)

Zone Blocking - Outside Zone (from Alex Gibbs, who is like Yoda with more cussing)

Those are my ideas to start out - I imagine that we'll find some additional topics to delve into as we go. Of course, if there's anything else you'd like to see covered in this series just ask and I'll see if I can figure it out.