Last time we took a look at some popular man/power blocking schemes and some of the characteristic blocks that make them go. There and in other spots, questions have been raised about zone blocking - what it is, why use it and how it works. This piece is the first step towards answering those questions, as we take a look at the Inside Zone play.

My knowledge of Inside Zone scheme and mechanics has come from a few key places - a Joe Wickline coaching clinic (via DVD - I didn't get an invite), a similar clinic from Alex Gibbs, Rick Trickett's (FSU's OL coach) book on coaching the offensive line and some of Chip Kelly's publicly available discussion. We're obviously most interested in how Coach Wickline approaches the thing, so the approach he outlined in his clinic is the one I'm focusing on here.

There are three things that every blocker has to know, with the absolute certainty born of careful study and endless repetition, in order for a zone scheme to work. Those three things are:

#3 - If I'm blocking in combination, when do I come off onto the linebacker?

A big virtue of Wickline's system is keeping the answers to those three key questions as straightforward as possible.

Let's start with #1 - who am I blocking? To see how Wickline's charges answer that question, let's start out with a simple setup (click to embiggen): 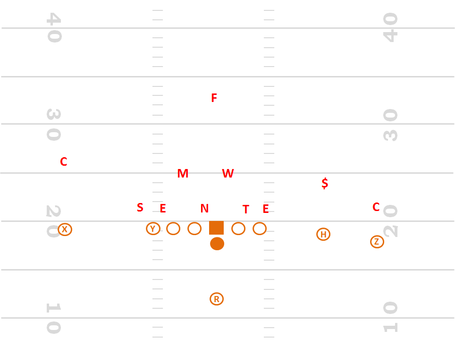 Here we’ve got 11 personnel – 1 back and 1 tight end – facing an Under front from the defense. Now let’s say the play call is an Inside Zone run to the strong side – who blocks who? The answer to that question lies in the Zero ID system: 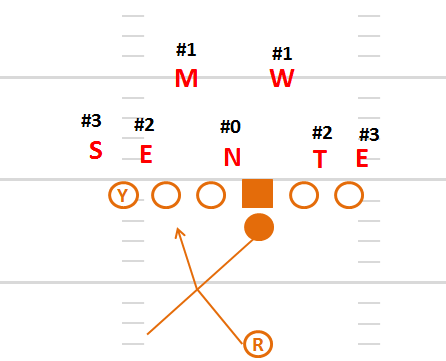 The "Zero ID" approach means that the center identifies the first defender to the playside and dubs him #0. That’s the center’s blocking assignment. From there, you count outward to number and assign the rest of the defenders – here, the Mike becomes #1, the strongside DE becomes #2 and the Sam playing down over the TE becomes #3. The same approach applies as you work out on the backside of the play. Counting out from the center, the Will linebacker becomes #1 (there’s no #0 on the backside of a play), the 3-tech DT becomes #2 and the weakside end becomes #3. It’s probably just about the simplest system for handling the question of who’s got who (and so far as I can tell it's the same approach that Chip Kelly uses.) There’s no need to learn complicated rules for Under vs Over fronts or anything like that. There can be some adjustments in the zero ID if, say, a strong safety walks down late as an overhang defender on a certain side, but for the sake of generally understanding what we’re trying to do all you need is this basic concept.

Assignment-wise, the numbers correlate with the blockers’ distance from center – the guards are responsible for #1, the tackles for #2 and the tight end (if there is one to that side) has #3. To see how these blocks will play out, let’s add zone tracks to the mix: 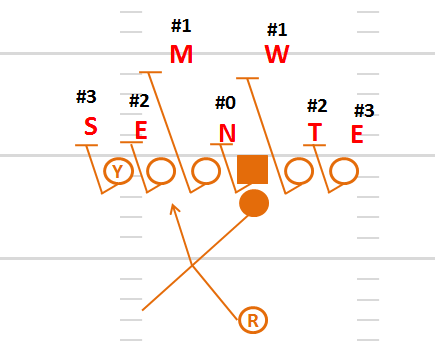 The "zone track" concept is integral to how Wickline teaches zone blocking. The tracks are meant to keep guys moving aggressively downhill at an angle, targeting the playside jersey number of the guy they’re blocking. The little jag at the bottom denotes the zone drop step, which is the first step a lineman takes to open his hips up and allow him to run his track. The depth and width of that first step is driven by where your guy is aligned – if he’s basically head up over you, you’re taking a very small step that’s just enough to get you on an angle that will let you get playside on the guy you’re blocking. The wider your assignment is aligned, the deeper and wider that step will be in order to let you have the angle you’ll need to reach him playside. The step is also important for the timing of the play, as it synchronizes the OL and gives the ball time to get to the line of scrimmage as they’re executing their blocks.

Variances in that step aside, the tracks for all the blockers should run in pretty tight parallel. Everyone coming off tight and parallel prevents the kind of penetration that can get backs dropped in the backfield and throw the whole offense off-schedule. Parallel zone tracks are also zone blocking’s built-in answer to stunts and other gap-exchange action from the defensive front.

In truth, blockers’ assignments in this zone approach can be thought of in the same way that coverage guys’ assignments work in a pattern-matching scheme. A cornerback may be assigned the #1 (widest) receiving threat after the receivers have distributed themselves. If the guy who lined up wide (the #1 receiver pre-snap) slants in while the slot receiver (the #2 receiver pre-snap) runs a quick out to the flat, then the slot receiver has BECOME the new #1 (widest) receiver and is covered by the cornerback.

Zone blocking assignments basically work the same way. As things are drawn up above, the playside guard would be running his track and meeting the Mike linebacker a couple of yards from the LOS while the playside tackle will run his track and say hi to the strongside end almost immediately. But what if that end is stunting inside and the Mike is coming over him to take that C gap? Trying to chase those defenders through their motion would be a disaster for the whole concept. Instead, what should happen is something like this: 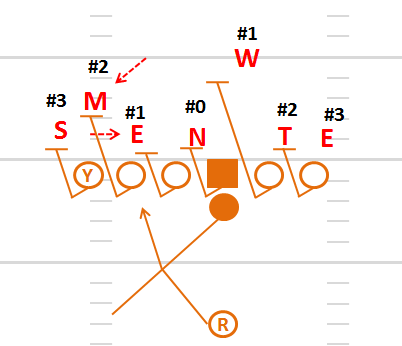 As the DE and Mike basically swap positions, the DE BECOMES the new #1 and the Mike becomes the new #2. If the playside guard just runs his track, the fact that the DE is the new #1 will present itself suddenly and violently after about a step and a half with very little deep thought required. Similarly, if the playside tackle just runs HIS track (as opposed to getting undisciplined and chasing the DE inside) he’ll meet up with Mike, who is the new #2, and hopefully be ready to blast the hell out of him.

A lot of Question #2 - How Do I Block Him? - is contained in the description above. From an overall approach and attitude standpoint, Inside Zone is a downhill and aggressive play with a drive-blocking attitude in contact with the defender. The blockers are aiming at the playside (outside) number of the guy they're blocking - they're not so much trying to reach the guy and seal him as they are to hit him hard there and drive him so that he's unable to come off the block and make a play on the ball.

Finally, the question of combo blocks comes into play. Any zone blocking scheme derives its true potency from how well it functions at blocking in combination. When combo blocks are working at their peak efficiency, they allow a quick double team to (ideally) displace a defender or (at minimum) give one guy help in controlling him as the other heads to the second level to take out a linebacker. Combos are also tremendously important in dealing with DL who are tough to handle alone due to their alignment, badassitude, or a mix of the two.

There are a lot of different approaches and calls for figuring out combo block responsibilities, but Wickline's approach is basically of the covered/uncovered school: 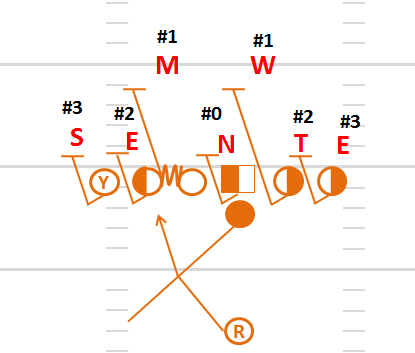 Now, that squiggle between the playside guard and tackle may not be doing its job as representational art, but it’s mean to denote that the guard (who is uncovered – no DL is lined up directly over him) should work in combination with the tackle against the weakside DE before the guard comes off to get after the Mike. The guard’s steps should guide him towards the mid-line of the DE, and his contact should drive him "through the cylinder" of the DE and then to and through the playside number of the Mike linebacker.

If that DE is going hard to the outside, the guard isn’t going to go chasing him down the line – he’ll take that step, see the block isn’t there and go right after Mike on his track. If the DE is playing fairly strong and straight against the tackle, the guard will hit him and play through the cylinder to the Mike. Somewhere between that kind of action and a full-on stunt between the two defenders, things can get kind of muddy. The "who comes off and when" question is clean and clear on the chalkboard, but getting it right on the field means having smart guys who have worked in combination together over and over and over again. If you're the discerning sort who takes in this information and concludes that Texas' OL may not be executing at 2012 OSU levels in September 2014...then you're on the right blog.

So that's a high-level look at some of the dynamics of zone blocking, translated into the Inside Zone concept. Next time we'll take a look at Outside Zone and compare/contrast the approaches of the different plays (as well as the approaches of two different coaches, since the OZ stuff will have much more of an Alex Gibbs feel to it.)

The DVD of our very own Coach Wickline explaining all this and more in loving detail is available at this link, and if a couple of you are lunatic fringers like me and want to order it then I'd feel like I'd done Coach Joe a solid.

Here's an awesome video from Scott that I'd forgotten about that does a great job breaking down some features of Inside Zone featuring clips from the Harsin era. Hopefully this serves as a good complement to some of the text above and you can watch some of the combo blocks and cutback lanes unfold.