I watched a video of his interview on Texassports.

- North Texas has a new QB and lost their two top receivers.  Will rely on their physical OL.  "We'd better buckle it on - if not they can run right through us."

- Mentioned that we're going to rotate multiple guys at safety.  Most people knew about Jason Hall and Dylan Haines, but he also mentioned Adrian Colbert as now being an active part of that battle.  "All of the those guys are gonna play."

- UNT went into Athens last year and gave Georgia all they wanted for 3 quarters.

- "We gotta let our DL go play.  For our secondary - keep the ball in front and inside and let the big dogs eat."

-  Praised Quandre Diggs for his awareness.

-  Hassan Ridgeway - the light is turning on, but not on all the way yet.  If it ever does flip fully, he could be a special player.

- First thing Bedford grades on film is effort.  Next, missed tackles.  Next, big plays allowed (run over 15, pass over 20).

- When someone informed him that we still had 9,000 game tickets left for sale, Vance offered this impassioned plea: 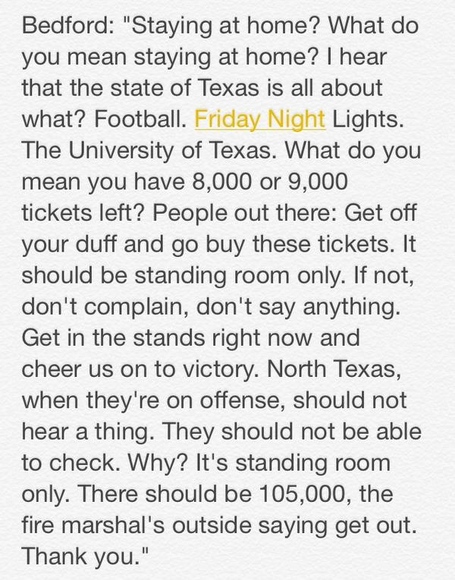