Share All sharing options for: OU Football: Any Given Stoops Press Conference 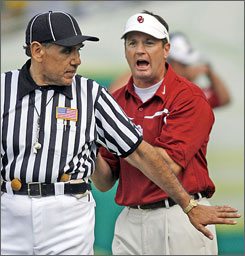 We're excited about this year. This is the best team we've ever had at Oklahoma and possibly the best in the history of the Big 12. We're putting in the work, doing the things that will make us successful, and looking forward to getting better every week. You know, some coaches like to talk about Big 12 titles, but some coaches - well, just one actually - have enough trophies that they can use them as a door stop, a paper weight, a bird feeder, and lose the other two and no one would miss them. I'll take questions now.

Coach, Gerald McCoy has been such a promising talent, I'm curious if...

You know some coaches want to talk when they have never won anything. Coaches who like to stuff their fat faces with snack cakes. Who badly need some time on a Nordic Track. Punch one of those coaches in the chest and treats would come out of their pockets like a goddamn vending machine. You know we've had some success here at the University of Oklahoma and some coaches south of here have not, coaches that are powder haired emo boys, sporting some kind of poor man's Bobby Cremins look and...

Did I say that name? Don't manufacture an issue where there is none. I'm just saying there are some coaches out there - coaches of Southern European ancestry in some instances, known job hoppers - who want to jaw about "If we'd done this or that in these four games, we'd be undefeated."

Well, let's do that. Right now. We have the game stolen at Oregon by a bunch of eco-terrorists. There's one. Paul Thompson betrays the Sooner Nation in Dallas and destroys a masterful coaching performance. There's two. Boise St runs dishonorable and deceitful plays and edges us in the Fiesta as Paul Thompson pulls another choke job. There's three. We're undefeated now. Play Boomer Sooner and let's all eat cake. Hey-ho, let's all celebrate. Wasn't that easy?

I ask you: who has had more happen to them than us? Only the Cherokee have suffered more than the 2006 OU Sooner Big 12 Championship Football Team. The Cambodians under Pol Pot, the Chinese under Mao, the residents of Stalingrad in 1944, and Oklahoma Football '06. All are a dead heat in torment.

Coach Stoops, when you look around the league there's so much parity and it just seems that the Big 12 South in particular is going to be a tough divi...

Some coaches know what it takes to win it. Coaches who wear visors and have no-nonsense attitudes. They go out and get it done. Others want to talk about winning it - these "funny guys" - these comedians with their squirting flowers and hand buzzers - some of them with shrill, whiny voices and a fan base with stupid traditions. Coaches who are southeasterly from this podium, who like tomfoolery and grab-assing and talking big in front of their alumni. Those coaches should be talking to Jenny Craig, not running amok with their delusions. Maybe looking into some Just For Men so they don't look so much like Barbara Bush.

Again, coach, I don't want to put words in your mouth, but I'm thinking this is Dennis Franchione that you're referring to - did his comments bother you? He said he was joking. A little harmless joke.

Bother me? I don't even know the comments you're talking about. So how could they bother me?

Sure, I go to bed every night with my jaw clenched at the smallest perceived slight and sit there for hours in a paralysis of rage, trying to burn holes through the ceiling with my eyes. Who doesn't?

But I do know that some people like to prank around, to endorse tomfoolery, to grab-ass, like some children who live in a certain household who thought it would be funny to put a whoopee cushion on Dad's office chair. This kid wants to giggle when Dad sits down to call recruits and it makes a loud farting sound. Well, sometimes that kid gets their 529 College Fund transferred to their sisters. No college for you. Are you laughing now?

Wise guys don't think it's funny when I hit them with a metal folding chair.

You know, some coaching wives don't want to stop watching Big Brother when a certain multiple Big 12 Coach of the Year winner wants to watch Gunsmoke reruns. Well, sometimes those wives are pre-nupped and maybe that wife is now at risk of losing everything because she wants to grab-ass about with her reality shows and not do what she's been coached to do. To execute. To be a fundamental wife and do the things that got her there.

Coach, back to football...

What do you mean, back to football? I've been trying to talk football, but certain reporters want to bring up certain coaches and create stories where there are none. I'm not saying you, but I am saying some. Many! Many reporters are doing this. All of them! Not you specifically, but all. They all do this. You, less so. I'm not even talking about you even though I'm staring at you and I'm indicating you with an outstretched index finger.

Forget all of this. It's not worth it. It's just not worth it. I'm just going to stare silently at this podium for a while and make you all very uncomfortable...

Hey! I've got it. I'm going to take this baby powder and sprinkle it on my head. Now I'm going to puff up my cheeks like I am an undisciplined snacking puff adder. Look at me! Who am I? What? No, not Captain Kangaroo. Guess again.

Now sing Boomer Sooner! I said, sing it. Good, that's right. Da da da da da da da da! Everyone. We're on top of the world. We're national champions again. See how easy that is? Now I'm going to prance around and swing this mop handle like a baton.