This just in: the Titans are a good football team. How good? Hell I don't know... better than pretty good, not quite damn good. So whatever that is, that's where they are. After one game it's all pretty subjective anyway. If they were a steak they'd be medium well. If they were a New Testament Apostle they'd be Simon. If they were a conifer it would be the larch- not on par with your spruces or redwoods, a sight better than than the yews or junipers. I hope that clears it up. There are some tangible things one can take from game 1 though, which we'll get to shortly.

First, what do you think Jack Del Rio dreamed about last night? Other than loose comfortable game day wear, I'd have to think it was the one where he gets clearance from the refs to pad-up at half time and play defense again, strap on a hat and hit somebody dammit, show these worthless pansies how to fill a gap and de-cleat somebody. You know he's thought about it on occasion, the occasion being about 400 times during the second half yesterday. He's an intense guy anyway, a former All-American USC LB in fact, and watching his vaunted rush defense get run over like a drunk armadillo had to be brutal. I give him props for not going Sam Kinison on a gatorade cooler or ripping that kickers other leg completely off to show him what "hurt" is. You know he wanted to. The guy was amazingly calm, though I half expected that vein on the side of his neck to leap out and tackle someone midway through the fourth. So, in case you missed it, the story of the game was the Titans rushing offense completely obliterating the Jaguars rush defense for something like 600 yards. In fact I had planned on starting off with some quotes from game MVP RB Chris Brown, but apparently he's still running. What I find most amusing is the backtracking by all of the national analysts who moaned and groaned all offseason about the loss of Travis Henry, it's as predictable as the summer solstice. I really don't understand how some of those guys get paid.

There are several reasons for the running success, we've covered them briefly before. The Oline is good- they win their individual battles more often than not and rarely break down as a unit. It's a hodge-podge group. The leader is a Hawai'ian who plays more like a Samoan. Or a Tongan maybe. I get my warlike Polynesians confused. He's been in the league 14 years and plays like the athletic, smart veteran you'd expect to see out there. He was playing mind games with Stroud and Henderson all game long, messing with the snap count, shifting off blocks to double down on the counter, waving a knife and a flaming torch around on passing downs. Mawae is a good guy, one of the five captains selected by the team. I hope he's got a few more years left. The left guard Bell is the "athletic" one, meaning that he can run a sub 5.0 40, the right guard Olson is indestructable, he's missed 2 games since 1999. At 6'7" and 315 lbs the left tackle Roos is, I think, the best of the group. He's huge, mobile, and smart. The guy grew up in Estonia, and as such he's only been playing football since his senior year of high school, and didn't play Oline until his sophomore year of college. He's also started every game since being drafted two years ago, he's not close to his prime yet if he can stay healthy. If you're a VY fan looking forward to the next 5-10 years having Mike Roos at LT is a good thing. The RT Stewart aka "Big Country" looks like a big soft redneck, the kind you usually see getting beat up in a Patrick Swayze movie. He plays like a 6'7" 320 lb splitting maul. Personally he's my favorite brand of Oline, probably because I'm so familiar with them around here. The kind of guy who likes to alternate working out with a little Copenhagen and Schlitz. Big, durable, dependable. You know they're going to be there for you unless the South secedes again for some reason. Watching a guy like Stewart come out of the pile without his helmet but holding the ball typifies what this line is all about. If you're a fan of headknocking in the trenches it's a fun group to watch. 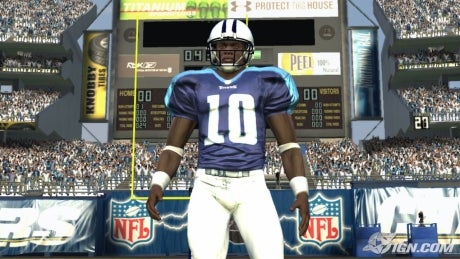 The other reason for the rushing success is Vince. Apparently Del Rio threatened his LB's this week that whichever one of them let VY take off would get the hose again. They bought it. He was mediocre passing: 11/18 for 78 yards, he had a few good throws like the third down conversion to Scaife, and had a few bad decisions on an overthrown ball for an INT and electing not to run for a TD in the red zone, but ultimately it didn't matter. They were moving the ball so well on the ground he didn't pass much and when he did it was all dink and dunk underneath stuff. The effect he had on the Jags front seven in the running game was another story. I'm surprised the analysts noticed it, they seemed oblivious to it last season, but the complete lack of backside pursuit opened up massive holes all day long. Even when a LB made the read on the outside he'd still follow Vince instead of the back, like he was holding a hologram football or something. It was surreal in an NFL game to see backs getting 8 and 10 yards a clip up the middle when everyone in the stadium knew they were going to run it. 280 yards on the ground is amazing, especially when you consider the Jags gave up about 90 YPG rushing last year, 4th in the league.

The other other reason is that Chow is a wizard. Man I wish he was our (Texas) OC. He made Jacksonville look like not only had they never seen a spread before, but that they were also unaware that guards are allowed to pull and trap. The cut back lanes Brown had to work with were a mile wide- even that little inside counter with Lendale was wide open. Watching the OLine get mechanical advantage over Stroud and Henderson over and over was beautiful. When Del Rio says things like "mismatches" and "they outphysicaled us", it's pure CoachSpeak.
The rough translation is "My Dline and DC looked at the tape and fondly remembered their rural canoe trip with Burt Reynolds and Jon Voight." The fake hand off no-look reverse stuff is fun and it was good for 18 yards, but the real story of this game was an OC and Oline coach putting a plan together to flat out abuse one of the best run defense in the league right up the middle. Apparently even the Japanese felt pretty sorry for Del Rio yesterday, releasing an upbeat, jaunty response to his request for help.

On the other side the defense played well, about like I expected. Cortland gave up a big play- he had good coverage but the receiver got a step and laid out for a perfectly thrown ball for TD. They gave up a field goal after a turnover and otherwise shut down the Jaguars offense. Giving up less than 50 yards to Fred Taylor and Maurice Jones-Drew is outstanding. Odom, Brown, and Foster were the upgrades up front we expected, and Finnegan played well the entire game. My predictions for this season hinged on a much improved defense, and it's nice to see that validated even if in limited reps. I'd like to see VY trust his receivers and throw downfield next week, I'd like to see better red zone production after moving down the field at will, and I'd like to see the secondary build on this week to get ready for Manning, Wayne and Harrison next week. Overall it was an auspicious opening game and a good win. 10 more to go.