Mike Gundy is protecting our children

Share All sharing options for: Mike Gundy is protecting our children

Someone secretly replaced the coffee that Mike Gundy normally drinks with new Folger's Crazy. He spent his post game press conference yesterday berating a reporter about a column she wrote before leaving the room without even talking about the game. Now Big 12 coaches are allowed one press conference meltdown a year (two if you're Dan Hawkins), but they usually save it for after a loss.

The offending article is pretty bad. It pretty much calls OSU quarterback Bobby Reid a momma's boy who won't play hurt, threatens to transfer whenever he has to compete for his position and can't eat chicken without his mother's help.

And so how does Gundy answer such an article? By pretty much calling Reid a momma's boy. 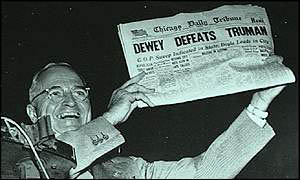 Kudos to Gundy for beginning the press conference by actually holding up the article in question. After last week's loss to Troy State, he held up a copy of the Chicago Daily Tribune with a headline that read 'Gundy Defeats Troy.'

There were so many great lines.

"This article embarrasses me to be involved in athletics tremendously." That line sounds better in the original Japanese.

"That's why I don't read the newspaper." Yet he has many leather-bound books, and his apartment smells of rich mahogany.

Fade out to uncomfortable looking reporter.