Here are some of the keys to beating KSU Saturday, including giant lizards, Vietnam and a pun from an old movie for a title.

and this is how it will look Saturday, to us: 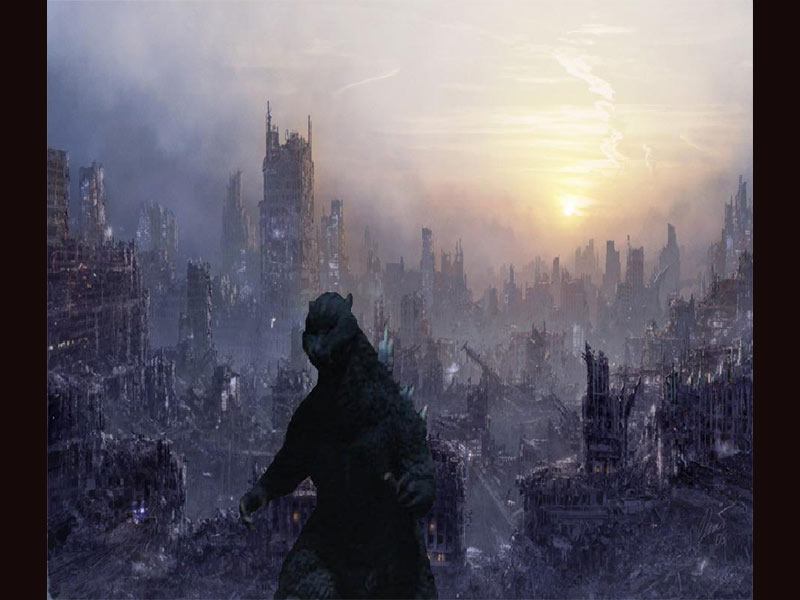 Godzirru! (Note: The ruined city of Tokyo represents Dallas Griffin. Tony Hills is Mothra, and Colt is Ultraman. Mack is probaby a Power Ranger.) This battle earns a notation from me because of how it'll force us to block. The 3-4, as you probably already know, features at nose tackle, a defender as high as a skyscraper that can breath fire at helicopters.

Well we want our linemen moving forward. Problem is, not since the days of National Lampoon's Kobe Bryant's Colorado Vacation has there been such potential for a cornholing. Now I have no idea if KSU's NT is any good. I don't even know his name. But since Rice's assortment of fightin' valedictorians were able to get Griffin on his heels, I hold no doubt that some Manhattanite will as well.

We have three options. We can A) let Griffin try his hand at blocking the NT alone, B) double team the NT, or C) let Griffin combo block with a guard.

We'll probably see all three because we've seen all three so far against other teams. Problem is Griffin can't take anyone one on one. And if we double, we're giving KSU exactly what they want, women that weigh less than 240 and don't have backne, freed up LBs. Fortunately, due to Griffin's lack of size, he does have unusual quickness. If we block like this:

we've got Griffin doing what he does best, using his quickness in open space to catch pursuit. All he has to do is hit the tackle and hold him for long enough for the backside guard to get to him, then take off. He pulls this maneuver with uncommon grace, so I would attack the front in mostly this manner. And since we only run one play when we zone block, I just highlighted like 70% of this week's challenges! I will now fork myself in the temple. So anyway, watch for how well or not well we handle the NT.

MY PREDICTION - We'll win some, we'll lose some.

Our pass rush vs. Josh Freeman - There is a scene in Forrest Gump (the book. Yeah, I read it) where his football coach makes him tackle a big tree over and over again. This is roughly what trying to sack Josh Freeman is like, right down to the sweet, savory sap that would pour out if you drilled into his torso. Last year we hit him, hit him again, hit him once more, and he just kept throwing strikes. He's too big to physically intimidate, and iron willed, apparently, as well. He sure torched us last year even with Rashad Bobino's helmet in his rib cage.

So we need to find something to throw him off. Rub ourselves in fried chicken grease. Put french fries in our belts. Whatever. He must be fazed. His arm is strong, so expect our mighty midget CB team to have to defend a number of long, mano a mano jump balls. Hopefully Jordy Nelson will pull a hamstring racing light waves around earth or something. Our lack of height, and let's face it, ability, in the secondary will be tested. So we need to get on Freeman and not get off until the final gun.

MY PREDICTION - Our pass rush is better than last year, and I don't think Freeman will have quite the Reggie-McNeal-Vs-OU-in-2000 performance that he did last year. I think we win this matchup.

Yamon Figurs vs. Aaron Ross - Oh, they graduated? Shit, I must've just had a Vietnam-like flashback. All I see in when I close my eyes are the slo-mo replays of Aaron Ross chasing Figurs from behind, running like Willem Dafoe at the end of Platoon.

MY PREDICTION - He'll drop one. He always does.

Chiles and McGee - We need to see them. When they played last week, and yeah, I know it's Rice, but I felt like we actually had a unit that was going to score and there wasn't anything you could do about it. Even Greg Davis can't mess up a zone read with those two. Will they see time? I don't really think this is a huge thing towards winning the game, but I sure would like to see some confidence in some young guys. It would make me feel a lot better.

MY PREDICTION - We'll see them, it will be beautiful, and it will not be crucial in any way.

Linebackers - What more needs to be said?

MY PREDICTION - Robert Killibrew will run the wrong way, Scott Derry will lower his head and smash into an OL for no reason and Rashad Bobino will charge into the backfield to tackle the space where the RB used to be. The backups will come in and play better, then will ride the pine until we play Baylor.