"Malaysia" is a proper noun – specifically, the name of a country in Southeast Asia. The word is spoken firmly and in a declarative tone. This is noted up front simply to distinguish it from the similar-sounding "malaise….yeah?" phrase uttered in querulous tones by Longhorn fans watching a Greg Davis-designed offense.

Malaysia is divided into three major geographical regions. So Doperbo will tell you that "Malaysia est omnis divisa in partes tres". This is because he is a Latin scholar who likes to take the first line from Julius Caesar’s writings on the Gallic wars and apply it to everyday life. Of course, Doperbo also likes to don a toga at halftime of Tennessee Titan games and perform shadow puppet reenactments of chariot races at the Circus Maximus. Not surprisingly, Doperbo’s social calendar is remarkably uncluttered.

Anyway, the three regions of Malaysia are: West Malaysia, Sarawak and Sabah. West (or "Peninsular") Malaysia, was known to the world as the country of Malaya until 1963. At that time, it annexed the states of Sabah and Sarawak on the large island of Borneo to the east as well as the microscopic island of Singapore on its southern tip. The decision to rename Malaya as "Malaysia" reflected the proud formation of a fresh entity – boldly looking forwarded and invigorated by its new membership. The Big Ten Conference scoffed at the decision.

Malaysia’s annexation of Singapore was short-lived. Irreconcilable ideological differences between the prevailing governments of Malaysia and Singapore resulted in the small, backwater pimple of an island being kicked out of Malaysia in 1965. The enlightened Barking Carnival reader will instinctively smirk at this move, recalling that Singapore is now, after all, the crown jewel of Southeast Asia. Rumors persist that Malaysia’s decision to oust Singapore was made after careful consultation with both Charley Casserly and the high school basketball coach that cut Michael Jordan from the team his sophomore season.

Malaysia today is an interesting blend of the first world and the nowhere-near-first world. Parts of the capital city of Kuala Lumpur are as modern as anywhere else on the globe. The soaring, pencil-shaped Petronas Towers are a stunning sight for miles, and a visit up to the sky bridge on the Towers is a must. The area surrounding the towers is modern and well-appointed. On the other hand, just a few hours outside of KL could find you in the middle of the jungle next to a man finding dinner by shooting well-aimed blow darts. Perhaps the Petronas Towers are more aptly described as blow dart-shaped rather than pencil-shaped, then. 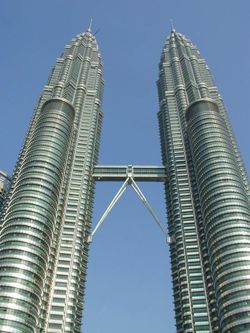 Tell Catherine Zeta-Jones up there that the tips are poisoned!

On my first trip to Kuala Lumpur, I crossed the causeway that connects Singapore with Malaysia and drove the 4.5 hours on a well-maintained highway to the city. It was fun to escape the close confines of Singapore and to be bouncing past the rubber plantations, to be slipping past the banana trees, to be…..well, you get the picture.

Now, I vaguely suspected that I was driving on a tollway. But the lack of signs in English and the absence of tollbooths along the way kept the fact that I did not actually have any Malaysian currency – Ringgits, that is - from being an immediate concern. Besides, I had U.S. dollars, and the greenback rules in Southeast Asia. ATM machines in Cambodia dispense dollars instead of Riels. Menu items in Vietnam are in U.S. dollars instead of Dong. Obtaining a visa on arrival in Indonesia costs a crisp $10 bill. Really, if the U.S. mint needs to expand, it should consider Jakarta or Ho Chi Minh City as possible locations.

Anyway, when I finally reached a toll plaza just south of KL I offered the smiling young lady at the booth some U.S. dollars. No go. I then offered her some Singapore dollars. Again not accepted. I tried a credit card. No can do. I was beginning to mentally appraise the value of the spare tire in my trunk when she magnanimously waved me along without paying. Hard to envision such largesse on, say, the New Jersey Turnpike.

Once in KL, I became hopelessly lost on numerous occasions. The first problem was that Malaysia, like Singapore, drives on the left side of the road. At the time, I was still a bit of a novice with the practice. Actually, remembering to stay on the left side of the road was not too difficult. The real problem was that the controls in left-hand drive cars in this region are back-ass-ward. Example: the turn signal is on the right side of the steering column and the windshield wiper is on the left. For days, the only way for Asian drivers to know that I was about to make a turn was seeing my windshield wipers came on.

But the main problem is that Kuala Lumpur’s roadways are just laid out in a pattern more convoluted than Mike Leach’s synapses. The road names are strange, and the maps are simply indecipherable. I ended up taking so many wrong turns that I became concerned that I would burn out my windshield wiper motor.

Fortunately, I was able to make some use of city landmarks to guide me. In particular, the Petronas Towers became my own personal aesthetically pleasing, elegantly tapered, twin blow dart global positioning beacons. I also remain indebted to the several polite strangers who approached me from nowhere to tell me: yes, you are holding the map upside down; no, you can’t get there from here; and yes, if it weren’t forbidden by Islam, we would bet the house on Trips Right’s picks this week.

Yep, Malaysia is very much a Muslim-dominated country. Sizeable Chinese and Indian minority populations exist, but Sharia law rules nonetheless. You can’t order a hamburger at McDonald’s as they will only serve you a "beef"burger. The mixture of Muslims with non-Muslims and the laws that favor native Malays over other races is an ongoing source of tension. However, Malaysia has generally managed to avoid the radical influences found elsewhere in the Philippines, parts of Indonesia, and in Thailand’s restive south.

Most of the native Malay women wear colorful scarves over their hair, but the rest of the dress code on the street is clearly more relaxed than that observed in the Middle East. At a KL shopping center, I saw one woman with a hair scarf who was also wearing a Hard Rock Cafe t-shirt and skin-tight designer jeans to complete the ensemble. Nice look.

Kuala Lumpur is reputed to be one of the least expensive large cities in the world. I can confirm that you can get an executive suite at a top hotel for $100. You can also feed 6 people at a Chili’s restaurant in KL for about $40. I will try to get Roy Williams’ autograph the next time I eat there. Maybe his date’s autograph as well.

My family had some unusual experiences when we visited the quaint old west Malaysian town of Malacca for a long weekend last year. Exploring the replica Portuguese galleon in the city and taking colorful buggy rides over the cobblestone streets were great fun. Our trip to a nearby water park the following day was less fun. We quickly discovered that we and one Chinese family were the only ones wearing western-style swimsuits. The Malay girls and women were dressed head to toe in suits that would make the suits worn in the U.S. at the turn of the 20th century look positively scandalous. My wife and daughters, brazenly showing their knee caps, were the objects of a few gawks. On the other hand, it was easy to pick out my kids among the hundred of inner tubes bobbing in the wave pool – hey, just look for the flesh.

My wife was particularly appalled at the signs throughout the park admonishing people not to wash their plates or eating utensils in the pool water. No joke. And by the lifeguards at the top of the slides who steadied your float for you with cigarettes dangling from their lips. And by the fast food offerings made of ingredients of undetermined origin. The fish balls were especially unusual in color and texture, and I recall thinking that the similarity between them and the moon rocks on display at NASA was more than just a passing one. As I think about it, my wife was basically appalled at the whole water park experience.

However, she and I are both big fans of exploring the Malaysian states of Sarawak and Sabah over in Borneo. They are, in our opinion, very compelling places to visit. Dense jungles, soaring mountains, orangutans in the wild, interesting caves…..great stuff. The town of Kuching, Sarawak has some interesting museums, is extremely clean, and has a modern airport and comfortable hotels. It is perfect place to hang out between trips into the wilds. Near Kuching are the longhouses, which are still used as living quarters by the only recently civilized tribes - descendants of cannibals in some cases - of the area.

My company maintains a small office in Sarawak, and at one point our home office in the U.S. innocently suggested that we source personnel for that office by using a headhunter.

We are still laughing and they are still wondering why.

Let me explain the 401K options to you

Next stop for the Lonely Longhorn: Thailand.