The Problem With Our Pass Scheme

Share All sharing options for: The Problem With Our Pass Scheme

This is purely scheme, so anyone who shouts out "Linebackers!" is technically correct, but this isn't the place. We have a purely schematic issue that has arisen, and contributed in no small part to our loss on Saturday. I mentioned it last night (#7), but I thought I would deeper illustrate what I mean.

In the simplest words possible, our cornerbacks have to be the deep coverage because we need the safeties for run support. That's why they give up so much cushion. As we saw on OU's first scoring drive, if the WR beats our corner deep, he's screwed. On OU's first deep completion, Marcus Griffin was lined up 6 yards off the ball. That's not a deep safety. That's a Roy Williams rover type deal.

Here is how it works. Both safeties read the end man on the line of scrimmage (EMOL), be it a tackle or a tight end:

If the EMOL read is a run, the safeties come up in run support:

If it's a pass read, the help on the outside receiver

There is a similar explanation here.

It's a little more in depth. But I want to focus on two things in particular. Now, the cover 4 is a fine coverage. Lots of good teams run it. The mistake we've made is taking a coverage and making it a defense. We don't do anything else. Most teams that do what we do switch it up with cover 2. Why? It changes the strength of the coverage. Here is a still image from frame 21 of the previous picture: 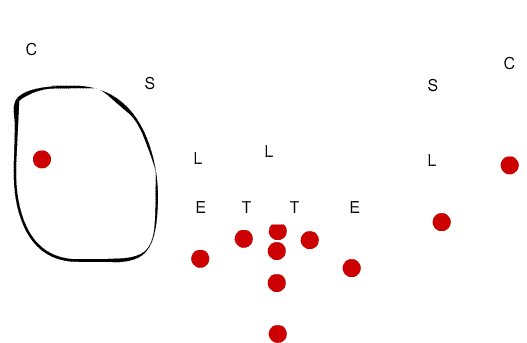 Notice how, yards into the pattern, there isn't anyone capable of stopping a hitch or an out route. This is the main weakness of the coverage. Bradford was having trouble timing the slant routes correctly, so late in the game, they were just taking 7-8 yards on out routes on first down and setting themselves up with 2nd and shorts constantly. Only time we ever stopped them once they adopted this form of attack was when a receiver dropped a ball, or Bradford threw a bad pass.

Early in the game OU tested our midgets, just going deep. We defended that very well. Even on the two completed passes that led to the first TD, Foster and Palmer had decent coverage, they just couldn't handle the perfectly thrown ball and then Kelly's size. I just wanted to point this out because OU started the game hitting one weakness, then switched to another. Must be nice, having a staff that watches film.

Anyway, this is the reason you can't get by with one coverage. Most cover 2 teams have cover 4 as a change up, and vice versa. This is why:

Now the corners can squat on short routes to keep the QB from pecking away at us. On the right, the CB is in position to cover any short route and at least make it a challenge to complete. If the WR goes deep, as on the left, we have a safety back to help. Now we are, get ready for this, making the QB have to read a coverage. Not only does this shake his accuracy, since he doesn't have time to collect himself (see: McCoy, Colt), but it gives our pass rush another second or two to get into the backfield.

The other weakness in the cover 4 (for us) is that our safeties are not that great in run support, so we don't even get that much out of it. If we went to a cover 2 system with cover 4 thrown in and let our best LBs play to help stop the run with 7 guys, we'd be a pretty good defense. As it is, we are an average one that lets teams move down the field with relative ease (don't forget, Josh Freeman started the game something like 11/12 doing the same thing).