All the cool kids run the spread

Share All sharing options for: All the cool kids run the spread

There are different variations of the spread. Urban Meyer uses the spread option at Florida, but other teams spread the field without adding the option element. The option element is what makes it so dangerous. 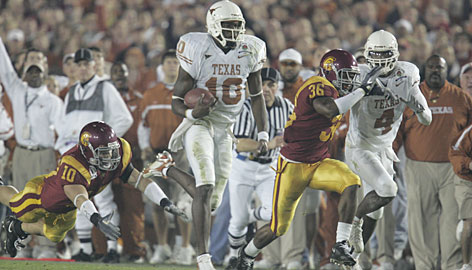 'The Brother from Another Dimension.'

However, the key for both is getting your playmakers the ball in space and making the defense defend the entire field. What's interesting to me is how teams are defending Florida's version.

"If you take away the deep ball you at least give your defense a chance, not to stop it but control it," says Florida receiver Percy Harvin. That's what Ole Miss did earlier this year in a 30-24 loss to the Gators. Florida offensive coordinator Dan Mullen says he'd try dropping eight and keeping everything in front of the defense. Neither of these worked too well for Ohio State last year.

Florida would rather run than pass so any team is going to have to focus on stopping the run first. A lot of what Florida does is dictated by how many people the defense puts in the box so teams have to disguise what they're doing. Because Florida uses a lot of option as well as misdirection, the defensive players have to know their assignments and be patient. Above all the defense has to tackle well.

And what happens if you don't do any of these things?