You know why people eat at Chili's or Applebee's? I don't mean people in Oklahoma who don't have anywhere else to go, I'm talking about well educated people with alternatives. You know, people who get it, like you and me. We're not fooled by Jack Daniel's grilling sauce- we know the alcohol evaporates with heat, and that the congeners are better in Knob Creek, but somebody is buying it. So why do they go? Consistency. That's why. The food isn't particularly good, nor particularly bad. The service is average, about like you would expect from college kids with buttons pinned to their hat. The prices aren't too high nor too low. It's not particularly healthy but it isn't fast food either. You're almost always going to get the same meal every time and you'll get roughly the same meal no matter where you are in the country. The tea doesn't go from being sweet to unsweet to being mixed with lemonade (what is up with that, Rhode Island?) as you head north. You know just what to expect and that's comforting, which is also why people eat at the Hard Rock Cafe when visiting otherwise interesting places like London or Moscow. Why risk being served jellied eels when you can have a nice safe burger? Look, I put some vinegar on my fries... I've gone native! Cheerio, lads! Ha Ha Ha. Crap. I spilled some on my brushpopper. Why is everyone looking at me.

Of course there's something to be said for consistency, even culinary consistency, I've just never been a fan of it personally. I like the uncertainty, the risk. Hmmm... prosciutto y melone. No idea what that is. Are melones testicles? Doesn't matter, let's try it. Suddenly you're a fan of ham wrapped fruit. See? It's an adventure. Next time you'll probably get borscht, so savor the moment.

The point is that I couldn't quite put my finger on my disappointment with this team, actually that's much too strong a word, but there was this nagging sense that something is missing, despite an outstanding first half of the season. I finally figured it out.

The Titans are the Applebees of the National Football League. And maybe that's OK. Just because you can't throw the ball doesn't mean you don't have flair.

Decent offense, great defense, conservative playcalling- especially with a lead, good special teams. We don't blow anyone out, but we don't get blown out. We'll maintain a 3:1 winning percentage into perpetuity, and have done so going back to midway through last season, 12-4 over the last 16 games. We run the ball, we stop the run. We don't throw the ball downfield unless we absolutely have to, and when we do everyone in the stadium closes their eyes in trepidation, especially the receivers. We'll punt down by a TD late in the game and we'll sit on a 4 point lead like it's free money. We usually have better starting field position than the defenders at Masada. Our kicker is a team captain. He can kick 27 field goals in the same game. We might try that at some point this season, just because we can. We're so conservative our head coach votes Whig. Actually conservative is an understatement, I've never seen an offense run 5 straight times for four no gains and a penalty from their own 2 yard line before. It'd be infuriating if it wasn't followed by a 70 yard punt and a defensive stop, much like the lack of a passing game would be infuritating if we weren't 6-2.

Say what you want about our brand of football, but Jeff has a recipe for success here and I'm going to try my best to get with the program. Sure, I miss the old up and down Titans- get destroyed by San Diego one week, score 24 fourth quarter points on New York another, who doesn't. But it's nice over here in consistency land. There are two dozen other teams who'd gladly trade places with us. Come grab a booth. Have some jalapeno shooters and pizza poppers with me.

So to recap the game: decent offense, great defense, good special teams, and conservative playcalling once we got the lead. This will also be the recap next week. And the week after. And the week after. Don't step in the icy puddle. Say hi to Ned Ryerson. Look our Dline sacked someone again. They so crazy. Look we made the playoffs.

When will Vince go off and throw five touchdowns in the first half? Or run for hundreds of yards and multiple touchdowns again? I don't know. Maybe the second half of the season, maybe never. I doubt it's soon though. From the interviews he sounds like hes taking a very long perspective on this thing- he's talking about his progress over years three, four and five right now. Seriously. I admire the maturity there, and that is a very mature outlook for someone who is used to instant success, and it isn't even that I doubt Vince or the coaches, it'd just be nice to know we could throw up some points this season in a hurry if we actually needed to. I have a feeling Fish would take the governor off if we got far behind, especially during the playoffs, but it'd be nice see it during the regular season just in case. Like I said the last two weeks, stay tuned.

BTW- Is there some backstory I don't know between Carolina and Tennessee? They fought on the same side during the Civil War, right? I'm not the most perceptive guy in the world but that looked like two teams that absolutely hate each other. Even some of the legal hits were borderline. I'm talking to you, Cortland. What's with the Raiders/Broncos style brawl? Maybe some of the longtime Titans fans can fill me in, because on the surface it looked like more like a hockey game.

So close. Do dreads count? They're like the mullet of the inner city. I'm calling that a check. 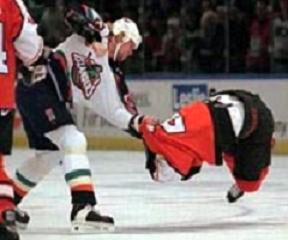 Just playing to the whistle, coach.

Overall the game turned out about like you'd expect. Using our hockey analogy, picture what would happen if one team started Brian Boitano on the right wing- and he somehow made it to the final 5 minutes of the game. That's basically how it played out for David Carr. Eventually the other guys just got tired of picking him up and wondered what the hell they were doing out there. You know the linemen hate his guts. I can imagine the huddle conversation. Hey, Prince Valiant, you mind throwing the f*ing ball next time? Haynesworth is crushing my trachea over here and you're running around like a 12 year old playing freeze tag. What the hell is wrong with you? No, I won't help you find your gloves.

I actually started rooting against our front four about halfway through the third quarter believe it or not. Have you ever yelled "Don't sack him! Don't sack him!" at your own dline before? Me neither. It's a strange feeling. I had this terrible premonition that we would knock Carr out of the game and some other back-up who could actually play QB would come in and go Rosenfels on us again. It still looked likely before that last pick- the Moore kid played a helluva lot better in about a minute and a half than David did all game. Carr was a classy guy after the game, I'll give him that, but every time I see him I think about McNair/Casserly and start laughing. Then I cry for a little while. Then I start laughing again.

In any event happy middle of the season everyone. We're on pace for 10+ wins and cruising. Keep thinking happy thoughts.

1. I have to agree with the TOMB fans who argued that Ben Troupe was the correct answer to the Tyrannosaurus question last week. We'd be better off sending him on a post route blindfolded, with a catcher's mitt taped to the back of his head.

2. I'm working on a mathematical theory called The Law of Conservation of LenDale, which proves that he will rush for 3-4 yards regardless of where he is hit in relation to the line of scrimmage, or how many people hit him. All I need is his accurate weight in kilograms to calculate the orbits.

3. I'm glad Reinfeldt didn't listen to the fans last offseason and sign big name free agents like Travis Henry and Champ Bailey. Even setting the Cutler draft argument aside for now, that team and several others that did so are a real mess. I'd like some new WR's, but Reinfeldt and Schwartz deserve a lot of credit right about now.

4. Kyle VanDen Bosch has the same personality on the field as that kid from Better Off Dead, the one on the bike. Double teams, chips, kickouts, he just won't stop coming. Didn't ask for a dime, I want my two dollars.... Blocking Haynesworth is bad enough but the two of them side by side is a nightmare.

5. Griffin is playing really well, even this early. You can tell safety is his natural position. That break up in the endzone is the definition of over-the-top help. Finnegan's emergence as a 180 lb hitman has allowed us get this secondary years ahead of where it was this time last season. Given the youth on defense and the cap room we could be looking at a period of dominance here, and Fisher might not even have to worry about strip clubs and shootings to get it done.