Don’t know what you got… till it’s gone.

A great philosopher once said that. I can't confirm that he was directly addressing our rush defense at the time, but I have my suspicions.

Of course, karmically speaking, it's my fault for calling the Titans the Applebee's of the National Football League last week. 1-2-3 Jinx. You owe me a Coke. How was I supposed to know the Jaguars were going to steal our clever strategems? It was like watching an evil doppelganger ruthlessly and methodically kick our ass. We're supposed to run the ball. We're supposed to stop the run. Frankly I find your methods unoriginal and derivative, Jacksonville. Now give them back you thieving bastards. 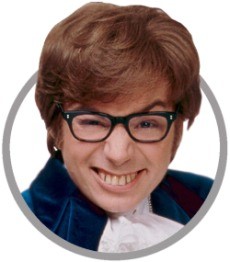 I know it may all seem like a big lark but I was really committed to the whole get with the program theme last week. I spent a good half-hour on it. Behind it all the way. Like the rest of the Barking Carnival staff, I take pride in our commitment to hard-hitting insight, gritty realism, and abstract math skills. So when I said I was ready to get behind Fisherball, I meant it. Like Saul on the road to Damascus, I experienced some real change there. I appreciated the subtle nuances of the guard trap. I reconsidered the role of the punter as team leader. I started growing a 'stache. Then when I'm all ready to enjoy my newfound appreciation of our particular brand of football, somebody changed the freaking menu.

Excuse me, this is not what I ordered.

Ummm, no. It's not. I ordered a Quesadilla Explosion and a Rockin' Tropical Punch Fruit Freezer.

This is a piece of wonderbread and a warm Fanta.

I'm afraid not sir. There's been a problem in the kitchen.

Oh. Okay. Cool. How about some Crispy Honey-Chipotle Chicken Crispers?

Sorry. LenDale's hurt too. We're going to pound Henry inside for awhile.

Certainly sir. Just as soon as Nick Harper goes back in the game

Oh man. This is bad. This is real bad. Donald Trump's hair bad. Who is playing corner?

Well, technically, Reynaldo Hill at the moment, ooohhh boy he just got burned. I did say technically.

This is the worst. meal. ever. Is there even a chance...

Normally, yes. But Vince is in a weird place right now. He won't run because we want him to, so we won't let him throw unless we're really far behind.

Won't they expect that?

Yes! Which is why it will catch them off guard. It's all very complicated. Oh look, the defense jumped offsides again.

Actually it's not very surprising in retrospect. If we can't run, and can't stop the run, we can't beat a team that can. Not in this incarnation. We'd need some key special teams plays and turnovers to make a game of it against a team like Jacksonville, much like last season, and those came too little too late. Most fans tend to view these games the same way the blind men in the parable describe an elephant, by grabbing the most objectionable piece in front of them and pontificating on it, while losing sight of the big picture in the process. A football team is no different. It's not the QB. It's not the WR's. It's not the playcalling, or the Dline, or the secondary, or the coaches, or the turnovers, or the penalties. It's the elephant. Here's how my blame paragraph would play out:

Losing the best defensive lineman in the NFL against a team that runs well is probably a bad thing. You know how most games have a pivotal moment or inflection point- one that you can look back on that basically dictates the outcome of the game? For me the pivotal moment in this game was noticing that Albert was wearing street clothes. I choked on my warm Fanta. Not only do you lose the battle up front, but now you can double VanDen Bosch without penalty. Replacing Harper with Hill also makes a difference. As much grief as I gave Harper earlier in the year, watching a few series without him cured me of that. Likewise with special teams: Davis and Griffin are difference makers in the return game. Brandon Jones is not. Field position, the fickle bitch, who has been so good to us all season, decided she liked the cut of Del Rio's jib this weekend. That would have been fine if we'd have been able to get a defensive stop on some key drives, but the defense allowed more fourth down conversions than we usually do third downs, though there were plenty of those to go around. In fact, getting gashed up the middle like that consistently reminded me quite a bit of last season.

On offense Big Country probably had his worst game (not the hold specifically- though that did hurt- he was struggling all game), and that was before our power back got hurt. We compensated by sending Chris Henry on a Gung Ho! charge firmly into the back of Benji Olson several times in a row. I think the only one who was surprised was Benji. Not that it was particularly bad play all around, just too many little things to overcome. One of our crucial turnovers came from a veteran pro-bowler. Shit happens. So we couldn't move the ball on the ground and didn't have an answer for that until after the half, and we didn't change the offensive mindset and go shotgun four wides until it was too late. We'd have had to play mistake free ball to catch up by that point, and while we looked good on that desperation drive in the third quarter, we still had too many mistakes and too many errors to really make a game of it. I wonder where Vince's head is right now. I wonder if he and Norm have set up a modus vivendi and neglected to tell anyone. If so I wonder who is going to win. Most of all I wonder if our QB and WR's have the same playbook.

1. I'm handicapping the over for every time the fact that Vince Young and Jay Cutler are playing one another is mentioned this week by someone on television who has watched less than one full game by either. The office pool is at 430.

2. You know how most of college (at least my college) was spent drinking Shiner and arguing about whether Dalton or Snake Plisken would win in a fight? I've been trying to decide if there's an NFL coach who could take out Del Rio mano y mano and can't come up with one. I'm thinking maybe Holmgren if he pinned him, but that's a big if.

3. Griffin made one of the most heads up plays I've ever seen from a rookie on that fake- that was brilliant. Then he bounced off Jones-Drew a few plays later. I often forget just how young most of this defense is.

4. The question of what value Haynesworth brings to this defense have been answered rather convincingly in my opinion. If I was him I'd be out plane shopping.

5. These write-ups are a lot harder after a loss for some reason, even for a grim steely-nerved hombre like myself. I want to let everyone out there know it's going to be alright. We're going to get through this. We'll get our defense back. Vince will figure this shit out. Fisher will loosen up and go for it once and awhile... OK that won't actually happen but you know what I mean. You can hum Don't Stop Believing by Journey right now if you want. I am.

This is not Journey.