Grades for win against Okie State

Share All sharing options for: Grades for win against Okie State

Gallagher Iba arena is one of the toughest places to play in America and the Horns came away with the win. Oh yeah, and our defense was absolutely stellar. That's the good news. The bad news is we continue to see dog shit offense lacking any inside presence or any continuity to compete at a high level with elite or even good teams. And the Cowboys are neither. They are a squad that can definitely be exploited with any kind of decent offensive post play. 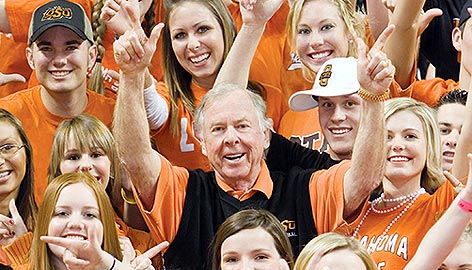 Again, the Horns are who they are. If they can shoot it at a high level they can usually outscore teams, especially teams that don't play great perimeter defense. See Tennessee. Or when the Horns strap it on and guard people, they can smother an opposing offense especially when that offense is perimeter oriented and the matchups are there. You saw the effectiveness of Texas' 3 guard lineup matching up with OSU's perimeter heavy personnel. A great defensive performance to be sure, but OSU lacks the type of balance that can give Texas fits. But, a win on the road in the Big 12 is nothing to sneeze at and certainly welcome in any form or fashion. On to the grades.

DJ Augustin. B+. Again, what can you say about the kid that hasn't already been said. He controls tempo and scores the basketball better than just about any guard in America. The vast majority of any offensive production this ball club gets can be attributed to DJ and his creativity. It was nice seeing someone else create for him for a wide open 3 but let's be realistic, without DJ this is a .500 ballclub. Only reason he doesn't get the A is a subpar 3 dimes and 3 turnovers, but keep in mind that OSU defends the perimeter well. Still another humongous 26 point effort. He also iced the game at the line which is what a PG needs to do.

Damion James. A-. Just an absolute man on the glass getting 12 huge boards in a game where half of the rebounding opportunities were long rebounds. In a nutshell anything close to the rim was his. I continue to be impressed with his shot selection and overall basketball IQ. He's a superstar and he was disciplined enough to limit himself to 10 shots hitting at a 50% clip. That's impressive considering one of the premier defenders in the nation, Marcus Dove, was on him all night. James wasn't selfish and didn't get sucked into a macho me against him deal. Kudos to him for being a team guy. Wish we could have rewarded him with more sets.

Connor Atchley. B. Connor battled all night on the glass and came away with 3 offensive boards and 6 boards overall. That's a great effort considering James played nearly the entire game, and most of the rebounds on the defensive end were of the long variety. Connor's bread is still buttered on the perimeter where he was an impressive 2-5 from 3's. Keep shooting it buddy. He gets a B because he forced a couple looks with his back to the basket, which is not his game, and committed a couple turnovers. That said he still needs 10 shots a game for this team to go where it wants to. And they need to be perimeter J's with the occasional put back or hook.

Texas' is at its best when Atchley's shooting 3's.

AJ Abrams. D. The good news is AJ had a couple assists, kept a couple possessions alive with passes that led to layups, and contributed on defense with two steals. The bad news is he is absolutely frigid from the perimeter yet his attempts don't reflect it. 0-7 from 3's and 3-12 overall when James and Atchley get 10 and 8 looks respectively is criminal. Until he starts shooting the ball better, AJ should get no more than 8 attempts per game. The kid needs a long hard talking to about shot selection and selfishness.

Justin Mason. A-. Mason, on the other hand, is the antithesis of AJ Abrams right now. He realizes he's in a shooting slump so he contributes in other ways. His defense on Saturday was a catalyst in the come from behind win, and his defense and rebounding were a huge factor in the win last night. What a stat line. 3-3 from the floor, 2-2 from the line, 4 offensive boards, and 6 rebounds overall. That's efficiency folks, and that's winning basketball. Keep it up Mase.

Gary Johnson. D. Thank goodness Mason has gotten his groove back because GJ is just not a confident basketball player right now for whatever reason. He had a big offensive board but then looked like a high school kid trying to convert the bunny. He's going through what Mason was going through a couple three weeks ago. Hopefully he can find something because this team needs the balance he can provide on both ends of the floor.

Wangmene. C+. Two boards in five minutes is good. He just needs to play more. Texas will need him against bigger frontcourts.

Clint Chapman. incomplete. One minute of action and one decent looking post move that was in and out. He needs more opportunities and his lack of minutes is a head scratcher.

Mooney. Incomplete. Will he continue to see minutes? Or is the experiment over?

Pittman. F. Zero minutes? He must really be in the dog house. The team zoned for about 7-8 possessions and still didn't get Pitt in the game to test a tiny OSU front court. Bad sign for Dex.

Coaching. B. Again, the kids were really up and down offensively and you have to wonder about the continuity and consistency of the offense. Texas really has the horses to pound smallish teams inside, but the staff refuses to get these young post players in ball games to show their wares. You're just not going to build depth letting AJ Abrams shoot you in out of ball games while kids like Chapman, Johnson, and Wangmene ride the pine. And the fact that Abrams is consistently getting more attempts than James and Atchley and even DJ sometimes is borderline criminal. It needs to be addressed and soon.

But any win on the road in conference and especially a win in Stillwater is great. I just hope these issues get addressed before the next road game in College Station.