Full fathom five thy father lies:
Of his bones are coral made:
Those are pearls that were his eyes:
Nothing of him that doth fade
But doth suffer a sea-change
Into something rich and strange.

We got Thomas Ashcraft yesterday. He was rumored to be an OU lean, along with Greg Timmons. Seems to me the teeth gnashing centered on our our new recruiting policies was a little premature. I was willing to offset my anger until this past weekend, and I'm glad I did.

Ashcraft is an attestation of the return of the Mack Brown mojo. It used to be nothing to walk into a maroon house and pull a commitment from a life long Aggie (It rarely happened with OU leans, though, because there was no such thing. Nobody wants to go there). Then last season, we seemed to lose our fight. We said "no thanks," to a disturbingly high number of top rated players, and wouldn't have even tried at Darrell Scott had Bobby Kennedy not been able to convince Brown to let him. We offered some reaches a year before we needed to. I like Antoine Hicks as much as anyone else, but did we really need to finish that recruitment months before we even contacted Desean Hales? Our fan base also got the pleasure of sticking up for "sleepers" like Blake Gideon, an activity usually left to Aggies.

In a vacuum, these events are disturbing. I will not say I told you so about defending any of this, because I didn't. Our class last year was not as good as it should have been, and too many castoffs will end up being direct obstacles to our success. Mistakes were made.

However, I am a master rationalizer. I've already talked myself into Brock Fitzhenry, and I was excited about our offense coming into last season. This aspect of my personality will get me mocked (at the bottom) on occasion, but it offers me a unique (read: insane) look at problems most people lose their marbles over, and boy were there some marbles lost. I held out of the real rancor, because I've always liked the way Mack mixed top flight talent with role players. He seems to get the fact that you can't take 25 stars and win, nor can you carpet bomb the Rivals100 with offers and hope for the best. That shit lands you in Lower Eightwinton.

Nobody wants to be that 4th WR running around between LBs and nickelbacks (go to Fathead.com and try to find a Terrance Copper poster), but Brock Fitzhenry would probably stick around and be that guy as an upperclassman. He and Hicks aren't great if they are the two best guys you got, but fit them in around Malcolm Williams, Dan Buckner, and Greg Timmons, and suddenly they don't look so bad. Jordan Pugh might be able to cover Hicks, but I bet you Demaurier Thompson can't. Best of all, they aren't on the bench pouting about not starting. I've maintained, for a long time, the importance of Brian Carter to the 2005 season. Maybe he only makes a play once or twice a game, but those plays end up being crucial bridges between Michael Huff and Vince Young.

My point in all of that is that taking some less than elite talent once in awhile isn't a bad thing. Taking only less than elite talent is, though, which is why I've had my eyes turned to this past weekend for 11 months now. If Mack decided last year that he wanted to be Joe Paterno and only offer kids that wore a tie to Austin, this Junior Day would've been the confirmation I needed to finally get the courage to fill my car with gasoline and matches and ram it into Belmont Hall. It would've signaled the willful surrender of an aging man, his actions essentially the football equivalent of Danny Glover's "I'm getting too old for this shit" from Lethal Weapon. 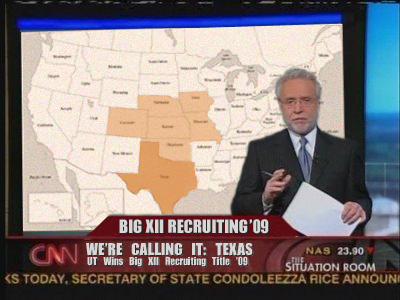 So far in 2008 our coaches have been discriminating, and we've pretty much locked up the best class in the Big 12 already. It should shift the perspective on last year from "disaster" to "OK, that was close. Now lets never speak of it again." We botched the Russell Sheppard recruitment, at least in the early going, but I haven't seen anyone openly wondering if Mack Brown actually cares about winning, which I saw dozens of times last year. It's like nothing's changed at all. We've even mishandled a potential QB controversy! Oh, sweet reminders of yesteryear.

Maybe last year was just the combination of a lot of isolated cases of bad luck. Stephen Good doesn't like big cities. RJ Washington's sister goes to OU. Jermie Calhoun's transcript was written in crayon. Maybe Mack really did have a standoff moment, locking himself in his bathroom with the crystal football and daring us to question him. He did seem to be a little more pissy to the media than normal, until Stephen McGee beat the bitch out of him. The world may never know. It seems to be a bump in the road, regardless, so let's focus all our hatred back on Greg Davis. Maybe we can make him spontaneously combust, if we try hard enough.