Today it gets serious

Share All sharing options for: Today it gets serious

We've had a trickle of college hoops coverage over the past week or so as the cannon fodder conferences have been playing and concluding their tournaments. But today we have:

It's going to be awesome, especially for those of us who don't have jobs but somehow can still afford cable.

In some ways, I actually prefer this week's action over the first round of the NCAAs. There's still so much hope in the air, you'd think you were at an Obama caucus.

In the big conferences, you get mid-table teams that are scratching and clawing to secure those last few slots tourney slots. These are the Villanovas and Ohio States and Texas A&Ms of the world - they simply can't afford any missteps at this point. This can lead to some heart-stopping contests and people like Gerry MacNamara going apeshit for four straight days. It can also lead to dreary, tight brickfests in front of soporific crowds. This is what the Aggies are hoping for against Iowa State, of course. 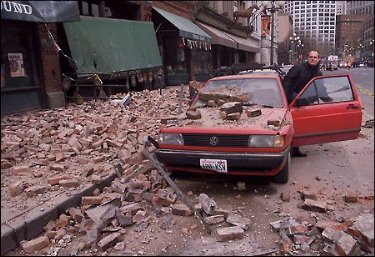 Your Doppler! Action! Forecast! for Kansas City for the late evening of March 13, 2008

There are usually big crowds at these big conference tourneys, and a lot of energy as the teams and their fan bases prep and primp for the Dance. But outside of a rare miracle run, and those bubble teams, the big conferences already have their representatives slotted. There's not a whole lot of mystery or stakes involved, outside of bragging rights and the chance to extend exhausting arguments of who really serves as conference champion, the tourney winner or the regular season winner.

It's the championship games of the little conferences - the MAACs, the SWACs, the Patriot Leagues - that I love to watch. The games are usually played in school gyms instead of swanky arenas, places so small that every row of stands will fit in a single camera angle. The announcer areas are fold-out cafeteria tables, tastefully limned with something approximating velvet. The cheerleaders are often taller and beefier than the point guards. The teams are made up of shitloads of seniors expecting to do something called "graduate" with "engineering" degrees or some other arcane bullshit. This is where you see Lithuanian ents trying to guard waterbug guards who may be small, but they sure are slow and shoot poorly.

And the games are often entertaining as hell, with mucho chaos reigning - desperate three-point heaves hitting nothing but backboard; passes going to different area codes from their targets; prematurely balding white guys somersaulting over floppy-haired white guys, trying desperately to grab a crucial rebound with only 14:32 left to go in the first half. The broadcasts are shakier, the sound higher-pitched than in games televised with actual production values; they are also blissfully lacking in Dick Vitale and Billy Packer. You just get the feeling these folks are doing this because they want to, not because they have to.

And at the end, a whole bunch of people jump around in ecstasy for the chance to be ritually devoured by Memphis a week or so from now.

That is, of course, unless they decide to go all Richmond or Santa Clara or Coppin State or Hampton on some bitches. This is what you get for disrespecting the MEAC