Trips has given us his thorough and exceedingly logical look at who makes the Sweet 16 in this year's March Madness, but how about the top seeds for the place closest to Athletic Director's heart -- the pocket book.

While coaches and players chase that elusive National Championship, the administrators are chasing their school's piece of the 6 Billion dollar TV contract. It wasn't that long ago that the basketball tournament was considered to be like many other National Championship events hosted by the NCAA -- basically a loss leader. But that began to change in 1979.

Larry Bird and Magic Johnson began their incandescent rivalry in the championship game that year, and College Basketball hasn't been the same since. Johnson's Michigan State team defeated Bird and Indiana State in front of over 30 million TV viewers. It remains the most watched college basketball game in history. And it allowed the NCAA and college AD's to see that basketball could be a money maker.

Three years later ESPN signed on to telecast first and second round games. It was the 4-letter network's first contract for a major NCAA sport, and it increased businesses for motels and hotels across the country that first week of the tournament as fans flocked to markets where ESPN was shown.

CBS took over the TV rights in 1991 and now distributes $545 million a year to the NCAA and colleges for the tournament. The network is doing just fine. Over 95% of the commercial inventory for the event was sold before a team was selected, but don't worry, if you would like to buy a 30 second spot in the Final Four, you can get it for $1.4 million, if you hurry.

Since 1979, schools have used the football model (ramped up recruiting, an arms race over facilities, star salaries for coaches, etc.) to try and turn their basketball programs into money makers. So going into this year's tournament, which teams a producing the best net revenue?

Here is a look at the top 16 net-revenue producing basketball programs in the tournament for this year. The figures come from a government website, Equity in Athletics. They are for the 2006-07 school year. Gross revenues include ticket sales, media rights, conference and tournament income as well as alumni contributions. The expenses include all operating expenses as well as any funds directed toward facility upgrades. 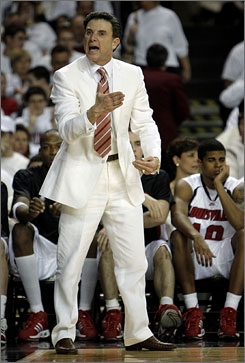 If he so desired, Rick Pitino could afford to change suits at the half of every game.

When Rick Barnes interviewed for the Texas position his main question was just how strong was the administration's committment to having an elite program. He got the answer he was looking for, and has helped fill in the details to help bring Texas unprecedented success, on and off the court.

Only four Big Ten teams got an invite to the Big Dance, but all four are among the Top Ten revenue producers in college basketball.

There were other prominent programs that didn't make the tournament this year. The two teams who met in last year's national championship game are not in the field this time around. Florida reported revenues of over $9 million, with just over $930,000 in profit. Ohio State would have bumped Texas down one spot on the #2 seed line with a healthy net revenue of $8,900,000 on almost $13 million in general revenue. Syracuse missed out on the tournament again, but they can sooth their hurt feelings with $7 million of net revenue.

There are other well-known programs in the tournament this year whose bottom line didn't get them into this Sweet 16. Connecticut's bottom line showed a profit margin of just over $1.3 million.

And what of Kentucky? While their cross-state rival was setting the pace, the Wildcats were just outside our Financial Sweet 16 with a little over $3 million in net revenue. Of course there are other advantages to having a loyal fan base that are priceless.