Share All sharing options for: First round recap/Today's games

(Apologies to TripsRight for any stepping on of toes I do here.)

The majors performed pretty much as expected. On the high end: The Big East was a last-second OT jump shot away from going a smooth 8-0. At the other end is the Pac-10, which split its six games. The Big 12 came in at a healthy 5-1. In hindsight, Baylor shouldn't have been invited - they played Purdue about the same as they played A&M and Colorado down the stretch - but everyone else played according to seed.

Best finish: Western Kentucky's Ty Rogers reaching into Drake's chest and ripping out its still-beating heart in OT. The Hilltoppers-Bulldogs beats out the San Diego-UConn ending, which lost style points for the aggravating run of fouls/free throws/timeouts, and the Belmont-Duke game because I fucking hate Duke and Gerald Henderson.

Best player: There were some tremendous individual performances, especially on Friday. I have to go with Davidson's Stephen Curry - 40 points, 14/22 from the field, 8/10 from behind the arc, 4/6 from the line, 3 rebounds, 5 steals and 6 of the Wildcats' last 8 points (a 3-pointer to break a 74-all tie, and three free throws in the last 1:04). That's a helluva day. 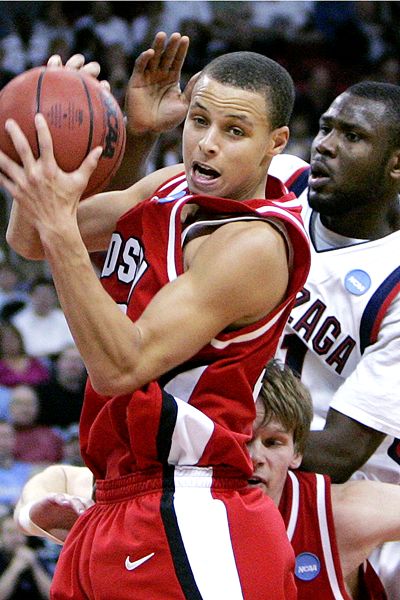 Ladies and gentlemen, the next President of the United States, Stephen Curry

As for the Horns, I thought they played 75% of a great game. The last 8 minutes was basically unwatchable, with sloppy offense, indifferent defense, wretched free-throw shooting. Otherwise, AJ Abrams was unstoppable, Damion James and Justin Mason had tremendous games, and Connor Atchley and Dexter Pittman offered high-quality play. DJ Augustin was awful, even with 8 assists. In order to stay sane, I'm assuming that the crappy last quarter of the game was due to boredom and Augustin's bad day was simply a fluke.

Regardless of my undoubtedly overwrought reaction, the game against the Governors was a textbook first round win for a #2 seed - rush out to a big lead and coast to an easy win. A scrimmage, in essence. We got our tourney legs under us, and were even able to get our down-benchers Ian Mooney, Harrison Smith and JD Lewis some bragging material for their 10-year reunions. That last bit might sound like snark but it's not: I honestly think it's cool that those guys will be able to say they got to play in an NCAA tournament game for the Burnt Orange.

Sweetest of all: We took the Pig crowd out of the equation early and kept them out. I hope to see the same on Sunday. It's going to be just a little bit harder to do so, I imagine.

Keep your thoughts to yourselves, Razorback fans.

I really love the Second Round - only the Elite 8 games are better, as far as I'm concerned. The dregs and auto-bids have been scrubbed out, more fans have come in for the weekend, and you're generally left with very solid teams and/or Cinderellas scratching and clawing for every single possession. You also get contrasting styles of play between teams of similar talent levels. All this without the (admittedly glorious) bloat of the first round. Good times.

(* I was already going to hell.This just gets me a rung lower.)