The sacred institution of unholy relations took one on the chin last week. Chris Applewhite got his ass dumped.

The reasons were myriad, the reactions were not. Anger and sadness, unable to coexist as one new super emotion, took turns at the helm, making me look and act like a bi-polar teenager. I'm pretty sure I pissed myself sometime in the first 48 hours, then yelled at my pants.

As stupid as it is to reveal my weakest moments to a bunch of people I have spent the last decade flaming on the internet, I feel that I must take my pain and perform a civic duty. I know I'm not the only one here who's been dumped before, nor will I be the last. Barking Carnival is a demanding mistress, it will consume another.

When that time comes, these words will be here for comfort. I have taken notes during the journey of my recovery, so like a lovelorn Jack Kerouac, please allow me to present Chris Applewhite's Step By Step Guide To Getting Over A Vicious Break Up:

Emotions are running high. This is a good thing. You do not want to dampen your spirit at this time. You will likely feel like a bit of a sopping vagina after being pwnt by a woman, so this is a good time to rediscover your manhood.

If you are stupid, watch Rambo. Otherwise, watch Fight Club, which is like Rambo for smart people. Watch it 50 times. Learn the lines and yell them back at the TV, if you must. Alcohol helps. With the yelling, I mean. 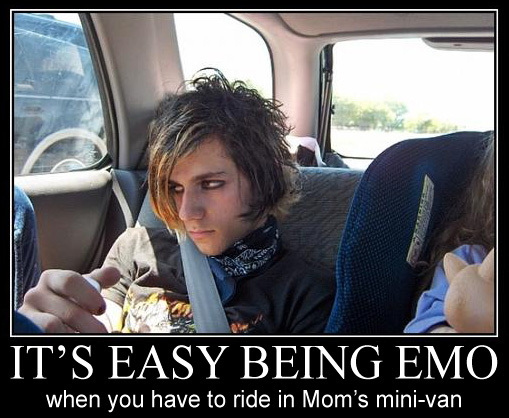 Note the hair. It's clearly a purposeful look, but it seems messy, like you don't care. This is what you want. You want to look good, but the the world that you don't need to conform to any stereotype that those jerks want to peg you with. You don't need them. You don't need anybody. All you need is your neck bandana, black or purple fingernail polish, maybe alcohol, because it helps, and your poetry.

"hey i lik dis poem i no wat u mean it touchs my heart.."

- Don't bother with friends, or sunlight for that matter.

It is scientific fact that your friends will make fun of you mercilessly, both for whimpering like a puppy in the corner and for getting dropped in the first place. You don't need that right now. Don't even tell them. If they ask where you were the last week, make up a story about an African safari. If you layer it with details, like, say, maybe a rhino stole your nice safari hat that your late grandmother willed to you after succumbing to foot cancer, it will become more believable.

That is not to say you can't have fun during that time, it just has to be alone in your cave. Men are tunnelers, we like security and coziness, it's in our DNA. Find your happy place. It is scientific fact that sunlight will remind you that you have to look in the mirror and see the reality of the situation. You don't need that right now. Turnoff the lights (if it's daytime, find a closet and sit in it. Rock back and forth, if you have to), get a bottle of whiskey (alcohol helps) and get under your covers. This will be your fortress of solitude. Tell yourself that she'll come back. It's only over if you think it's over. Remember this.

It is scientific fact that dogs can't feel pain. I have a rat terrier, myself. He's a 16 pound tank that could probably take down a middle eastern dictatorship in a week. He is not much with exit plans, though, as evidenced by the game we play, wherein I throw the comforter on him and he tries to get out. Idiot!

Anyhow, it helped to project my hurt onto him and just go to town. Go. To. Town. I like to open windows and see if I can't just punt his goofy ass straight out the window. He seems to like it. I mean, he hasn't said anything. Therapists will tell you to hit a pillow, but pillows can't get scared of you. It is this power that you seek. Obtain it, friend. Alcohol helps.

My neighbor doesn't like me. He is always challenging me to a fight. He says he can easily toss me off the balcony, if he wanted. Well screw him, what do I care, I'm dead to the world. Let's do this.

He backed down when I readily accepted his offer. I mean I'm 15 years younger and half a foot taller. Makes sense he'd not actually want to throw down. But there are other assholes who need to be vigilante'd right in their face. Go to a bar. Get hammered alone on a stool at the end. Alcohol will help here, trust me.

First guy with a popped collar gets bumped into on purpose, spilling his 7&7 on his shoes. If he brags about his leased 3-series BMW, he is getting tackled. Nobody can prevent this. The world has scorned you. You need to scorn it back. Stand up to the man. A night in jail will reconnect you with humanity. Specifically, the homeless, drunk humanity that is peeing in the corner.

You wouldn't have the courage to do this normally, so take advantage of your apathy now, by kicking absolute ass. You need to get the anger out of your system, and since you can't hit the girl, hit the guy you picture her dating after you. Overachieving, preppy fuck.

The rage will subside. Now it is time for healing. You need a power greater than yourself.

Christianity is a popular choice here in the states. That Jesus cat seems like he'd be happy to help you, but he is never around. Buddhism is pretty relaxing, from what I understand. Alcoholism if good. For me, I went with a more mainstream religion. No withdrawal. They were right. After my personality test, they were able to give me the help I needed for only 7 low payments of $399.99. Now that's a deal. Plus they made me a Grand Wizard or something. I don't know, I need to read the brochure again. I might've bought a condo on the moon.

I'm not that far into the program yet, obviously, but I'm coming along with all this thetan madness, as they call it. Stupid ghosts! At least I'm not alone.