Share All sharing options for: A Man's Best Friend

Three weeks after getting dumped by the future mother of my adopted African children (I refuse to pass down my athletic genes. Refuse to. I may look fit but I couldn't break a 5.2 40 in high school, at my fitness peak. If I'm raising a coach's kid, he's going to get a damned head start. Know this. Abfume Okafor Applewhite will be a star.) I have not asked for and thus not received even an ounce of condolence or support. I don't need it.

The reason I don't need the comforting bosom of human kinship is the beast you see before you**. 16 pounds of pure, roach hunting fury. He's small but he is tough a nails. His day job, protecting the sanctity of my dojo from various critters and passers-by, gives a false impression of what he actually is.

This is Seymour*, quite simply, the most loving creature that our dear Mother Nature hath ever produced. No joke, this motherfucker gives hugs. Hugs! One paw on each side of your neck, and he will just sit there and let you bask in the affection.

As far as I can tell, this is quite unusual for the terrier breeds. The rat terrier comes with an 'off switch,' meaning it isn't full steam ahead 24 hours a day. He can sit there on your lap and chill, which, as a mostly sedentary being, I appreciate.

It's this interaction that I have found calming. My dog, simply happy to be around me, has a sanative property about him. The liberal distribution of his foppish hugs and kisses can be extremely therapeutic, I'm telling you. He is independent, as terriers are, but once in awhile he will come investigate your area with the intent of squeezing as much of his body onto yours as he possibly can.

He's not all cuddles and rainbows, of course. He's still a terrier. If I make any movement towards the front of the apartment he will rocket out of his lounging position and rocket jump at the door. If I put on shoes, or pants, he will jump on me and try to lead me to his leash. Oh, he always knows where the leash is. If I reach for the it, this fool loses his goddamned mind.

He's a digger, or for the PC crowd, a degro. He will throw punches like a champ. My face and arms bear scars of past encounters. When leashes are involved, he will let loose. Good luck getting out of that without a scratch or twelve. It takes me a minute to actually get the damn thing hooked to his pimped out collar because he won't sit still. If I can get him to sit, a command he normally follows, he'll shake uncontrollably until the exact moment that I take my hand off his hindquarters, and which point he will resume his determined quest to get on the other side of that door.

This dog loves the outdoors. Inside, I wield complete control. He'll steal trash and take it under the bed, all covert like. He's the Navy SEAL of trash stealing. But for the most part I am his king and he obeys. Once we are out the door, the sacred bond of master and submissive pet is shattered. I could hold a 24 ounce t-bone steak in my hands and he wouldn't pay me one ounce of attention. All he cares about is finding a thousand places to hitch up his leg and spray his invisible piss. I don't really understand his behavior, since he empties his barrels, so to speak, at his first pit stop.

As insignificant as I feel at these times, it's always made up once we are back home. He'll drink his water then trot over to me and show his appreciation with a quick drive-by display of the awesome connection a pet and his owner have. He'll look me in the eye, give me a hug, then run off to chew something he yanked out of the kitchen when I wasn't looking.

I love this stupid animal more than I should. I know that if someone else started petting it, and feeding it, it would switch allegiances immediately. I know this. Yet when it trots over just to see how I'm doing, I can't help but feel fulfilled.

Anyhow, I am far from alone in the world of dog men. We value tough, loyal companions, and I expect you to tell me about yours. You are all now legally bound by man code to express your appreciation for your mutt.

*named after the dog on Futurama. Yes, you know the one.

**I had to default to an older picture above because he is so tough to get to sit still. Here is the journey I took to try and get this dog on camera. First, he objects: 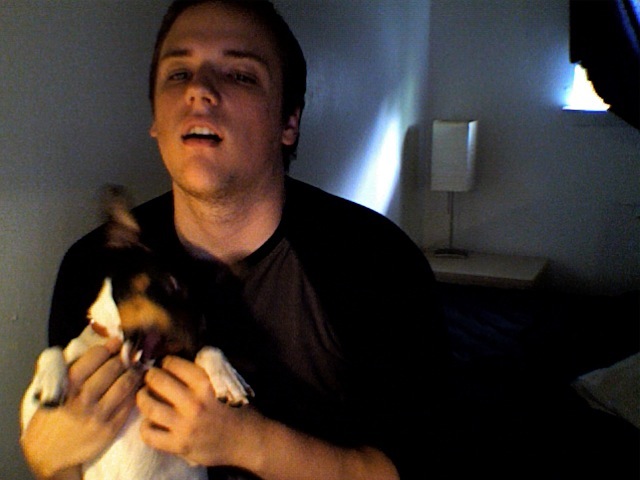 Then he tries to escape. Mission failed! Ha! 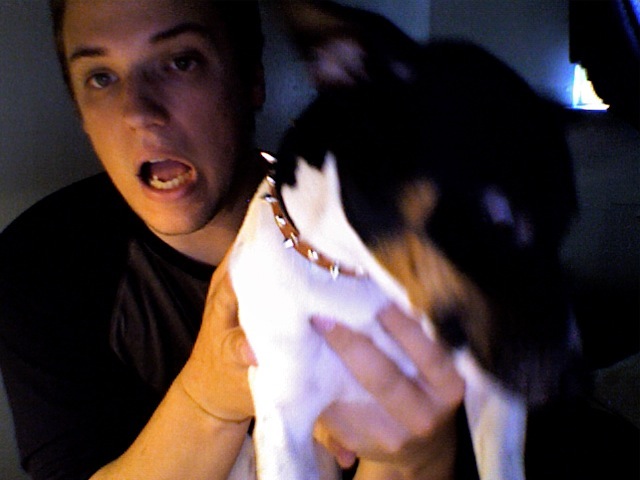 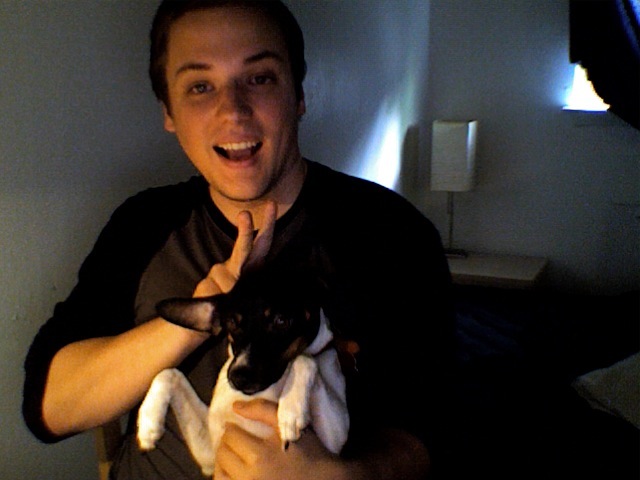 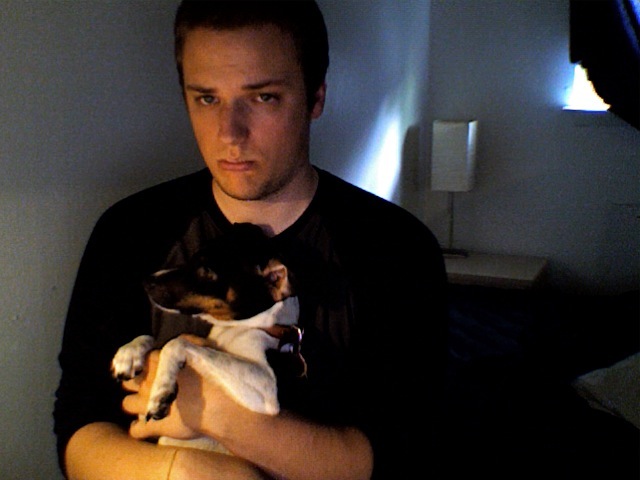