With the 2008 NFL draft is coming up later this month, here is a look back at the first eight drafts of this decade, and what collegiate teams were perceived by the NFL to have the deepest talent pools to draw from.

The breakdown first looks at the Top Ten schools in producing 1st round draft choices. The team at the top of the list laps the rest of the college programs.

The Miami Hurricanes smoke the rest of college football when it comes to producing top draft choices this decade.

To put these numbers into a better perspective, take a look at how these ten programs compare when you look at both the perceived quality and and quantity of talent available to the NFL. Here is a look at the number of 1st round draft choices, first day draft choices and total numbers taken.

So far this Decade 42% of Miami's players taken in the draft were taken in the 1st round, with 64% going on the first day. No wonder Larry Coker got fired. 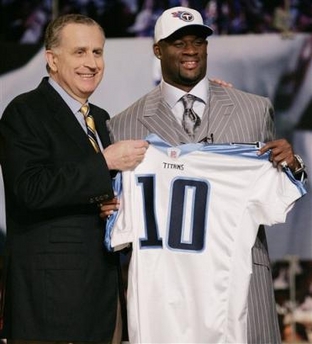 Texas has the most top 10 picks in the NFL draft this decade with 7.

There are a couple of interesting trends that might shed some light on how things have played out on the collegiate football fields over the past few years. For intance, Tennessee Coach Phil Fulmer's critics will note his downward cycle in producing NFL talent. In the first half of this decade, (2000-03) Tennessee had 32 players drafted, with 5 first round selections. The last four years, the Vols have had only 18 players taken in the draft, with 3 going in the first round.

Penn State has seen the overall draft numbers break out evenly, but the first half of the decade was top heavy with the talent, as 6 of their 8 first round draft choices going between 2000-03, as well as 12 of their 18 first day draft choices.

Ohio State has seen the opposite trend. Tressel has had 34 players taken in the drafts from 2004-07, including 10 players going in the first round.

USC obviously is another school that has seen a dramatic rise in draftable talent over the past four years. The Trojans have had 25 players selected in the 2004-07 drafts, with 5 first rounders, and 17 players going in the first three rounds.

It should come as no surprise that Texas and Oklahoma have escalated their battles over talent this decade as well. From 2000-03 Texas had only 10 players drafted, 4 going in the first round. Over the past four drafts, the Horns doubled both those numbers to 20 and 8.

Meanwhile OU had 10 players drafted from 2000-03 as well with 3 first round selections. The Sooners have seen 23 players selected in the 2004-07 drafts, with 5 going in the first round.

Of course, these numbers just show how the talent was perceived by the pros before the draft. There were more than enough busts or disappointments for all teams involved. Just like high school recruiting, the NFL lives by the stock brokers anthem:

"Past Performance Does Not Guarantee Future Results"