My top 3 intersport rivalries, or at least the ones that I can think of this instant:

Hold that thought, because someone is trying to make The List.

I'll post an excerpt for those of you whose wife doesn't read Curt Schilling's blog everyday and tell you about it.

From the first tip until about 4 minutes left in the game I saw and heard this guy bitch at his teammates. Every TO he came to the bench pissed, and a few of them he went to other guys and yelled about something they weren’t doing, or something they did wrong. No dialog about "hey let’s go, let’s get after it" or whatever. He spent the better part of 3.5 quarters pissed off and ranting at the non-execution or lack of, of his team. Then he raped a lady. Then when they made what almost was a historic run in the 4th, during a TO, he got down on the floor and basically said ‘Let’s f’ing go, right now, right here" or something to that affect. I am not making this observation in a good or bad way, I have no idea how the guys in the NBA play or do things like this, but I thought it was a fascinating bit of insight for me to watch someone in another sport who is in the position of a team leader and how he interacted with his team and teammates. Watching the other 11 guys, every time out it was high fives and "Hey nice work, let’s get after it" or something to that affect.

Now I don't want to take sides here. That's not my style. You can even spell the word effect any way you like and I'm okay with it. I might point it out, but only in a constructive way. Not in a haughty effeminate way like Huck does. Live and let live, says I.

No, the real draw for me is the dramatic tableau of two men locked in a media argument which has no practical relevance whatsoever. Curt isn't going to get hard fouled the next game and Kobe can't charge the mound. That's what makes intersport rivalries so awesome, the sheer meaningless of it all. Of course it's probably better this way, intersports fights would be inherently unfair. Imagine if David Beckham went public with the notion that Danica Patrick had big thighs. Just imagine. She'd try to run him over walking down Rodeo, he'd flop down well before contact and she'd miss and run over Posh instead. I mean really. What does that solve?

There's no telling where this Schilling/Kobe thing is headed. It could get ugly. I give Kobe the advantage if he can close quickly and avoid Schilling's indestructible ankle, Curt gets the nod if he can keep him at a distance and has small round projectiles to hurl at Kobe's head. If Manny or Odom happen to be there they can offer encouraging expressions like "You going to take that? You going to take that? Nahhh man. Uh uh. For real?" and "Sweep the leg!" or whatever one says at these occasions.

I've got Curt's World of Warcraft model, somebody make a Kobe and we'll test it out. That girl HenryJames usually plays can ref. 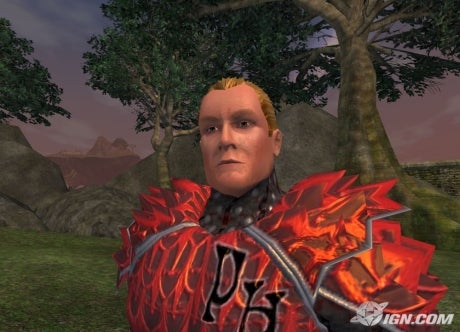