Share All sharing options for: Pete Carroll is Underpaid

...at least according to Forbes Magazine. They took a look at the contracts of the coaches in the BCS (and Notre Dame) and devised some metric to compare salary vs. productivity. They proclaim Jim Tressell as the best BCS Bargain.

Forbes lists the coaches they see as the most overpaid and the most underpaid in the BCS. 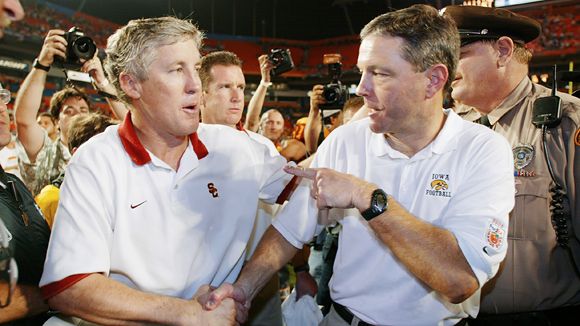 The magazine looked at the records for the BCS schools from 2005-07 and compared a coach’s 2007 salary with his team’s performance over the past three years. Bonus points were awarded for winning any of the five prestigious Bowl Championship Series (BCS) bowl games. A score of 120 meant that the coach achieved 20% more victories per dollar of pay than the average coach.

1. Jim Tressell Ohio State (score of 122). Ohio State was 33-5 over the past three years and reached the BCS Championship Game the past two seasons. He earned $2.6 million in 2007. Eight BCS coaches made more.

3. Jim Grobe - Wake Forest (score of 116). Grobe is 24-14 over the last three seasons at the smallest BCS school -- one that had never won more than 8 games in a season until he arrived on campus.

The Five Not Worth The Bang For The Buck