Men are from Mars, Stoops is on Pluto

Share All sharing options for: Men are from Mars, Stoops is on Pluto

"There are only two locker rooms I’d ever seen where the players were devastated.

One was the U.S.C. locker room after Matt Leinart and the Trojans lost the national title to Texas in the Rose Bowl. I remember Leinart sitting alone on a bench, eating a turkey sandwich and a chocolate chip cookie and drinking a Gatorade. It was kind of surreal that his whole senior year had come down to that.

"The other was the Oklahoma locker room after the Sooners lost to Boise State in what many consider the greatest finish to a college football game. That would be the Ian Johnson, Statue of Liberty, hook-and-ladder game. The most bizarre scene from that locker room was Oklahoma Coach Bob Stoops just standing by himself, staring off into the ether. It’s rare to see a head coach alone anywhere, anytime. But Stoops could have been on Pluto, and no one at that second was going to visit." 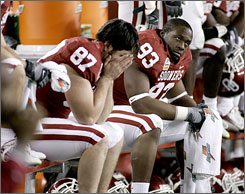