Share All sharing options for: Phil Fulmer is the new Lloyd Carr

Fulmer went and laid another egg on the West Coast last night. The myth that Fulmer is an elite coach (if it still exists at this point) is based on his 45-5 record from '95-'98. He's 80-35 since then. Not bad, but that's not good enough in a conference with LSU, Georgia, Alabama and Florida. 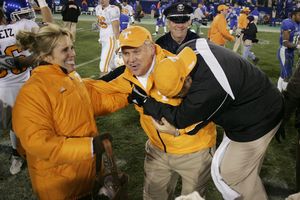