DVR is an amazing thing. Watching the game without live action unladen by emotion, you always see a different contest. You realize how much of football really is the little things. The twin gifts of rewind and dispassion.

So obviously we beat the carbs out of Rice. Like our two previous non-conference routs, there is danger in extrapolating too much from this, but we all learned a little to make us better and that's the whole point of scheduling Rice and the third act of any mixed race adoption sitcom from the 80's. First, the Owls. They had three guys that distinguish them from hapless Rice teams of yore. Chase Clement is yet another nifty, height-challenged, preppy elite suburb program QB from Texas who was ignored by big name college programs. He revels in demonstrating that in the spread offense a guy with an accurate arm, a 4.5 40 time, and a good head on his shoulders can be a major irritant even when surrounded by guys with 1400 SATs. The state of Texas now spawns preppy spread warriors like salmon. Give him real weapons across the board and he's Todd Reesing, Chase Daniel, etc. WR Jarrett Dillard consistently used all of our corners as his personal tampon. He was the best WR on the field and I say that with full respect to the ruthless efficiency of Shipley and Cosby. Everyone knows Dillard has great hands and runs great routes - what they don't mention is his superior toughness, body control, and the fact that he runs a 40 in pads the same as in shorts. He's also smart as hell. There is a future for this guy in the League. He disgraces people. James Casey, despite a bad drop, is a great athlete and legit threat at TE. Unfortunately, we could use him. That's all Rice has. It should get them to .500.

Defensively, Muschamp is playing it right. Our youth and inexperience dictates safety deep and the heavy use of extra DB personnel. Chykie has turned the corner at corner. He's going to be very good. Beasley is regressing and needs to toughen up. Aaron Williams is now fixture at dime and must have played 30 snaps. He will be elite. Tactically, our constant concession of short routes may be frustrating, but we've faced three competent passing offenses in succession and we're giving up very few big plays down the field -- witness a 6.2 yards per attempt cumulative average.

Most of the Big 12 offenses would prefer to score from 50 yards out (OU, OSU excepted). Give them 2nd and goal on your 5 yard line and they're moderately out of sorts -- lofting fades and hoping a QB draw out of an empty set can sneak in. We have a nice, active front four and though we have only one upper classman with traditional linebacker skills (Muckelroy), we're playing with some real passion and pride in the red zone. We are a Bend-But-Don't-Break-Defense. After the Mackovic years, hearing those words is like gargling with turpentine, but realize that there are passive and aggressive forms of that philosophy.

I know that every fan deep down in places inaccessible by proctoscope wants to be the '85 Bears or '83 Texas on defense, but that world is over. The fact is, USC is a Bend-But-Don't-Break-Defense. Watch 'em. They just have better athletes doing it. Bend-But-Don't-Break doesn't mean passive. In fact, it's effectiveness is premised on the notion that you're knocking the shit out of people and causing turnovers if the offense doesn't self-destruct along the way. The '86 Giants believed in that philosophy and no one called them pussies. Unfortunately, our problem is the whole causing turnovers and knocking people out thing - see our DB's. Too bad Duane Akina decided to take a three year recruiting vacation during our BCS runs. Not that I hold it against him or anything. How was he supposed to know that Ross and Huff didn't have nine years of eligibility?

I digress. Muschamp's ability to make halftime adjustments is impressive. We've given up 7 second half points in three games. This game also revealed something that could prove to be a very important learning point for us down the road and it's very much not Bend-But-Don't- Break: our front four's depth and athleticism is such that we can force sacks and batted balls if we'll trust our corners to man up and extend routes. Not every snap. We don't have the personnel to do that. But often enough to inflict a negative play and fuck up someone's series. Why did we get so many sacks in the 2nd half and limit Rice to around 100 yards of offense? We manned up across the board and sat on all of the short routes. We also told our pass rushers to ignore gap control and get the passer in any way they desired.

The result? Clement's running and passing lanes collapsed, we disrupted the entire Owl offense, and our corners held up long enough to force Clement to hold onto the ball and let our rush get there. With Lamarr Houston back at DT, Kindle a de facto starting DE, and Orakpo learning that there are other pass rush techniques beyond bull rush, we're a hell of a lot more athletic on the DL than we thought. I think Muschamp noticed and will be turning those hounds loose again. As Sting once said, "If you love your DL, set them free."

By the way, would it shock you to know that we're 21st in the NCAA in sacks? We're in the top fifth of teams at getting to the QB. Doesn't feel that way does it? When the whole point of the spread is to get the ball out of your QB's hands in 1-2 seconds, sacks aren't easy to come by. Batted balls are the new sack. There are college fans the nation over bitching about their team's lack of pressure on the QB. Fine. As long as it distracts us from the financial markets. 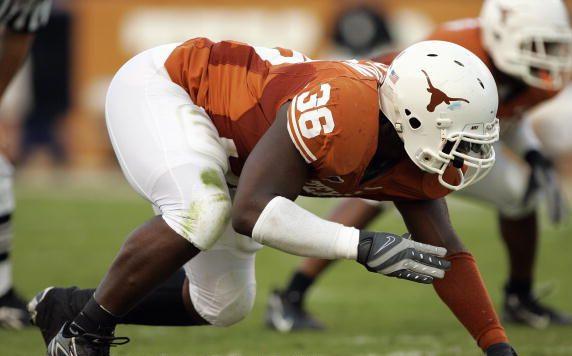 Getting away from scheme, the Defensive MVP was Lamarr Houston. It really took watching the replay to appreciate how much he wrecked the Rice offense. He's a great DT and exactly what we should be doing at the position - at least when paired with an elite run stopper like Miller. Acho continues to be our best pure pass rusher. I'd like to see more than 15 snaps from him.

Watching Rashad Bobino caused me physical pain. His pursuit angles, his lateral movement, I have to stop. But he does bench 450! Muschamp has basically conceded that his primary value is stunting up the middle on passing downs to prevent a double team on Houston or Miller.

On offense, Colt is the shiznit. That was just stellar QB play and I know that it's Rice, but some of those throws would have been impressive without defensive backs on the field. His legs continue to provide lipstick to the pig our running game. If any of you cite that we're averaging 204 yards per game as some sort of retort to that, I will come through your screen like The Candy Man and throttle you. Shipley and Cosby define steadiness, Greg Davis called a number of crossing routes and nice wrinkles in the passing game, and Chris O continues to be the only 4.6 dude in college football where his first twenty yards are a 3.0 and his last twenty are a 1.5. Perhaps I exaggerate, but he is a long strider. I like old Chris. We need to turn him into an H-Back pronto. If I see another person suggest Dan Buckner to TE, I'm going to murder death kill someone.

Speaking of homicide, let's talk about the running game. Poor Vondrell should be running I-back for Nebraska circa 1988. I will disagree with dedfischer on his reading of Vondrell in this game. Every negative play Vondrell had was a result of a missed block on a DL. Untouched. Every time he had reasonable blocking, he got decent yardage - he even made some people miss on his nifty nine yarder and when we were backed up on our goalline. He also singlehandedly prevented a safety when he powered through an unblocked Rice DL. Every week our running game - particulary our zone plays - are blocked like absolute dogshit in the first half and then corrected in the second half after we bench a couple of OL for series or two. Then suddenly Cody Johnson is a folk hero.

Cody Johnson earned a number of oohs and ahhs primarily because he ran with discernible vision, conjures a dim associative memory of Ricky Williams, and showed...above averageness!? We need a healthy Fozzy Whitaker stat, but most of all we need a real running game. The scheme is the thing. We've never really run the ball effectively without a major running threat at QB using the zone read and the incredibly sophisticated concept of blocking down on defenders rather than reach blocking and though it's tempting to utilize Colt in this way, if I'm OU or Missouri I'll concede the pawn of 10 yard runs to Colt in order to take the queen of free hits on him by Nic Harris and William Moore. The minute he gets injured, we're a 7-5 football team. The Cluster Flux package presents intriguing possibilities, but there are two major impediments:

1. It would actually require us to use it and commit to it. It's not a one play "look." It needs to have counter options, throwback passes, double option, a lead play. It can't be the Tony Jeffery reverse. See Miami Dolphins vs. New England.

2. John Chiles is the least elusive, easiest-to-tackle really fast guy I've seen since Reggie McNeal. When people compare his athleticism to Percy Harvin, I know they're going to immediately lobby for Montre Webber to play TE for us. Dude is talented. I'm just not sure where that talent is best served.

Shipley & Cosby were tremendous. Obviously, we're all interested to see how they do against upgraded competition, but I'm seeing a paucity of lockdown corners in the Big 12. How about you? Maybe good enough is all we need. Blaine Irby is a major loss. I pray football isn't over for him altogether. We've lost a major piece that we need against the better teams.

David Snow continues to play at a really high level for a freshman. I'm just totally impressed. Chris Hall is really physically weak. He needs to hit the weight room and the stadium steps and remake his body. This will be a problem when Gerald McCoy drives him three yards into our backfield on every play in Dallas. Presumably, we'll then blame that on our RBs.