How We Win: Offense

Share All sharing options for: How We Win: Offense This is counterpoint to my OU Analysis which focused on providing a sober assessment of the Sooners, premised on my assumption that Longhorn fans were already aware that Colt McCoy is playing a like a certified badass, Cosby and Shipley have hands sweeter than pixie sticks, our DL is arguably the country's best, and our defense is several orders of magnitude better than any of us could have predicted. However, this is OU Week and feelings are testy. Anything less than a sloppy kiss for Texas is met with suspicion of treachery from Texas faithful.

I understand. You are still my people. No one will be happier than me if we win 38-7 and you get to mock me for even suggesting a close Sooner victory.

So how does Texas win on Saturday?

On offense, it's throwing the ball. That's it. More specifically, the way we throw the ball .

Let's not fall in love with 2nd and 11 early because we feel some need to establish a running game. That's coaching by the numbers and it defined our performance in this game from 2001-2004. "Keeping them honest" works when Ricky Williams or VY is lined up in your backfield. Our running game will come as a consequence of our ability to throw. It won't create it. I'll explain.

Open the game with Chris Ogbonnaya at HB with four wides. Motion him out. Does OU blitz our empty set automatically? If so, that's good knowledge. File it away for the counterpunch. Do you they leave five defenders in the box as they do against a Texas Tech? If so, that's an audible to a QB draw and a first down. When Chris O is in the backfield, is he respected? Does a LB have him in the flat? Wheel route. It's time to throw & that means Chris O

What does 4 wide do for us?

When you open up the field against OU, you make them declare their intentions. By alignment, by disposition, by intent. Kirkendoll, Collins, Williams, Buckner may not be game changers yet, but they are receiver eligible. Oklahoma can't ignore them as they will our TE personnel and any RB other than Ogbonnaya. The game is reduced to a pretty simple calculus - spread the field, count the men in the box, get us in the right play. Colt can do that.

The more receiving personnel you put on the field, the less ability OU has to double Shipley or Cosby. In fact, they really can't unless they go dime (6 DBs). Suddenly we've just created a viable running game running zone read. Ta-da! Say they outnumber us at the LOS and blitz but stay in dime to eradicate a running game and pressure Colt. Fine. Now two of the most canny receivers in college football can operate in space while a mobile QB buys time. Jordan Shipley has a double move that drops jocks. I'll throw those dice with you. 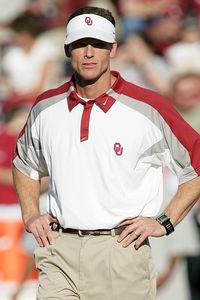 How dare you dictate my personnel!

4 wide opens running lanes for Colt. Run your inside WRs on outs and your outside receivers deep and it's amazing how the grass can open up in front of a QB. Suddenly pass rush discipline becomes important and OU pressures a bit more methodically.

OU needs to hide Nic Harris. Great player within his competencies, but they want him crushing people in run support or waaaay back watching things develop in front of him and punishing a receiver over the middle. Potentially manned up or with solo deep pass responsiblity in Cover 1? No sir. Bring in your dime, Venables. A nickel won't do. Unless you'd like Travis Lewis on a slot receiver.

Trust Colt. We should put the game in his hands. There comes a time in a player's development when they're ready and you hand them the keys. This game isn't too big for Colt McCoy and he'll play with confidence. He's 1-1 as a starter against Oklahoma and his combined passing stat line is:

That'll work. That doesn't mean it's predictive of his performance since those two OU defenses he faced no longer exist, but it certainly suggests that the guy is not going to crap his bed because 47,000 people in crimson overalls whose highest life aspiration is to own a jet ski are yelling at him.

In Colt We Should Trust

Finally, realize that our good defense is a gift to the offense. For far too long in this game, it has been Mack's philosophy that if we play good defense then our offense can lay up and wait for something good to happen. That has reaped losses in Dallas to the tune of 0-12, 3-14, 13-65 - need I go on? In fact, conservatism creates the very situations - 3rd and long - that creates the turnovers we're pretending to mitigate. A good Texas defense allows you to take chances on offense because there's a good possibility that a mistake won't kill you. A good defense isn't a prison. It's a get out of jail free card.

Play the card, let Colt throw the rock, and show off your brazen brass clackers. It's Texas/OU.