With Vince, obviously, you let him do whatever he wants. Call a pass, sit back, and watch. With Colt though, you can’t trust him to get those yards on the ground. He’s fast enough for a country grown honky, but he goes down on first contact and can’t always escape the rush from brothers twice as big and fast as he is.

So the basis of the offense has to be the pass. And since he is so accurate, and so strong making quick reads, you can get those three yards more often than not through the air with the short passing game.

I know what you're thinking, but unfortunately I don't have a secret newsletter for $1,200 a pop (and just so no one accuses me of over-tooting my own horn, I was also the sole author of this embarrassment).

We've been stuck in neutral, trying to recreate the nirvana of the "we're going to zone read now, try and fucking stop it" offense. Without Vince, and without that OL, people fucking stopped it. So after finding ourselves down 21-10, we found ourselves an identity.

My personal philosophy is to take what your QB does best and build around it. Colt's strengths (and weaknesses) are pretty obvious. That's what made our puppy-attacking-a-pit-bull offense so frustrating. I cannot say for sure where our offense will go from here -- the history of finding success then never trying it again is a long one -- but should we decide to venture in this new direction . . . well, we might actually want to get excited about the offense again. Without a single first-day pick on offense (maybe Hix?).

The other reason I called for that flavor offense reflects the vindictive bastard part of my personality. It's a great way to beat OU.

The Sooner defense is predication on prediction. They will guess what you do and call the best play to defeat it. This works against us because we're predictable. If you want to score on Oklahoma, you have to turn the tables. Instead of letting them confidently fly around the field, put them on their heels and make them react.

This play we ran about 15 times last Saturday:

We've been running it for years. I assume somebody taught Davis this play during one of his summer pow-wows with some Shanahan disciple.

Anyhow, it's a simple play. The first slot runs a flat route to stretch the underneath coverage, the outside receiver stretches vertical, and then you're left with the magic of the spread. A WR on a LB. If it's a zone, the WR just turns and finds a soft spot. If man, he runs an out to the sideline. OU runs mostly zone, but they do it in a pretty aggressive, almost Saban-like manner.

Shipley vs. a backup MLB or trying to take on the teeth of the OU defense with a run? If the safeties decide to help to the left, the WR on the right is 1 on 1. Remember the ball that Quan caught and then dragged Lendy Holmes another 5 yards? Yep, this play. It stresses everyone and doesn't let OU gang up on you like they want to. It's also a high percentage 5-8 yard play that can substitute for a run. 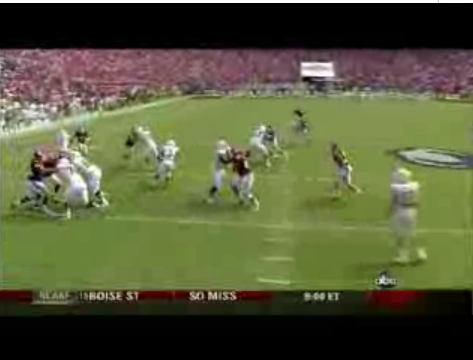 I like Chris O. He's legit. But you do not need talent to run through that hole. Look at that shit! That is a defense that is spread out and tired as an Atlantic City hooker at 3am.

Greg Davis is a west coast guy at heart. We started out in '98/'99 in a pretty pure west coast scheme. If we let him do what he's comfortable with -- using the running game only as a compliment for a highly prioritized passing game -- there is no reason we can't continue the success.

What we can't do is fall back into the run first mess we've been in. Against Rice? Fine. Missouri and their NFL-capable defenders? No.

We're not making it out of the MU-OSU-Tech-Kansas gauntlet alive. We'll lose one. But if we continue to build around Colt's strengths (and combine it with an ever improving defense) there is not a team in this conference who is better overall.