Share All sharing options for: Thoughts on MSU Loss

You hear coaches and pundits talk about it all the time. Finish. Play all 60 minutes, all 9 innings, and all 40 minutes. Finish the game. You probably heard about "finish's" kissing cousins clutch time and winning time. All cliche phrases, I know, but the reason they're cliche is because there's a sizeable portion of truth to them. And you won't find a college basketball game all year that's a better illustration of the importance of finishing than the game played this afternoon in the Toyota Center.

Well finishing in basketball is about three things. Getting good shots. Taking care of the basketball. And hitting free throws. To do all three at a high level, at an efficient level, you have to have solid point guard play. You can't have an offguard masquerading as a point guard or a small forward who happens to be your best ball handler and still have the capability to finish close games against quality opponents. Especially quality opponents that can defend as well as an Izzo coached Michigan State team.

For a large majority of the ballgame, Texas rebounded, defended, and shot selected like a top 5 basketball team. But when it came down to the last 5 minutes of the game, after Izzo had a chance to dissect our sets designed to free up AJ, counter to Connor from deep, or hit a lowpost player as the third option, we were locked down. Locked down by a team with equivalent athletes that were on to what we were doing. What then? Well then you need a player that can create off the bounce to free up a shooter or get to the rim to manufacture points at the foul line. Instead, at the end of the game, we were left with a one dimensional shooter running through baseline screens, three frontcourt players standing and watching, and a psuedo point guard pounding the deck waiting for sets that worked the first 35 minutes of the game to magically work a few minutes more.

On to the grades.

AJ Abrams. B. Granted the dimunitive senior didn't have his typical shooting game, but AJ really did a decent job letting the game come to him until he started to panic along with the rest of the team under the 3 minute mark when he forced a couple shots. You could see this one coming, though. Hell, we called Travis Walton's likelihood of locking up Abrams in the MSU preview. Walton is one of the best perimeter defenders in the college game and he has the luxury of being able to focus on the defensive end with Lucas having all the ball handling responsibilities. But AJ didn't really play all that bad. He just doesn't have a lead guard driving and kicking to him anymore when facing good defenses. Three assists and no turnovers even considering the 3-10 shooting nets him a B in my opinion. But as Scipio mentioned, this was the perfect case study of why AJ won't make it in the league.

Damion James. B+. At the risk of breaking my arm patting myself on the back, make that two for two on ingame predictions. I said Damion would come out inspired playing against a talent like Morgan. And the junior from Nacadoches did just that, outplaying the Spartan's talented wing with a nice 15 point 11 board night that included a couple deep bombs and two blocks. He doesn't get the A because he absolutely disappeared down the stretch. That's a little on him and a lot on Barnes for failing to get him looks that countered off of the Spartan overplay on AJ Abrams staggered screens. DJ needed to be one of those screeners that benefitted getting the ball on the wing after the Spartan's overhelped to AJ's double screens, because DJ is the only wing player we have that can shoot it and, if need be, blow by a defender closing out. Instead, this position was reserved for Atchley who was locked down after hitting two initial 3's.

Connor Atchley. B. It was a tale of two halves for Connor. Give him a D in the first and an A in the second. Average it out an he gets the solid B. The good news is that Connor finally found his shooting stroke and hit two big 3's. He looked much more confident in the second half. The bad news is that he looked like he didn't belong on the floor in the first half. Connor still needs to compete a little bit better on the boards, but he showed some good signs of returning to last year's form.

Justin Mason. D. I'm gonna be a hard ass for a change. Yes, I know he had ten stitches, but he did nothing down the stretch to create when AJ was locked down and our post play was non-existent. Justin's size should have allowed him to find some offense in the lane against Lucas but maybe the injury made Mason tentative. Justin's defense on Lucas was among the worst performances I've seen from the usually reliable defensive stopper. JM did not give up the cushion necessary to keep the talented Spartan guard in front. Lucas got to the lane repeatedly in the second half, creating shots and put backs for teammates when he wasn't converting point blank looks.

Gary Johnson. A. Gary Johnson had the best game he's had in a Horn uniform, and he needs to be a bigger part of the offense not just in terms of looks, but also as a playmaker and creater from the high post. His ability to shoot the 15 footer and put the ball on the floor and get to the rim make him the ideal candidate to operate out of the high post to compliment Pittman in the low post. But back to Gary's statline, 8-12 for 20 and 4 man size offensive boards. Defense was great again. 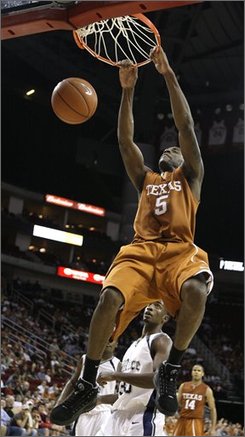 Damion James needs to be more of a creater against good defenses.

Clint Chapman. C. Flash was back flashing potential. Not much playing time to get a true evaluation, but it's obvious Clint needs to get stronger so he can finish on the low block. He still runs the floor well and has terrific athleticism. We need it to start translating to production.

Pittman. B. I was pleased to see Dexter show some fire in the game today, I just wish we could have gotten him the ball in the second half so he could continue to do work. Still, Big Dex was just 1-6 today although he did pull down 7 boards in limited action. I'm telling you, though, he'd be load on high/low sets that paired him up with GJ.

Dogus Balbay. B. I thought Dogus did a nice job of filling in for Mason in the first half. Dogus continues to be a liability and a source of helpside defense because of his inability to shoot the basketball, however. Teams will continue to be more than happy to rotate off of Dogus and invite jumpers from the sophomore until he knocks down some shots. The bright spot for Balbay was he was the only player that could handle Kalin Lucas on the ball. Dogus' strength and quickness kept Lucas out of the lane, and resulted in the Spartan offense bogging down, having to rely on Suton for scoring in the first half.

Varez Ward. Incomplete. With 3 personal fouls and Damion James playing so well, Varez didn't get many minutes. I would have loved to see him get a crack at Lucas.

Coaching. F. I'm not sure how to say this politely, but I think the AAU coaches in attendance could have come out of the stands and dry erased a better offensive plan of attack than Barnes did the last 5 minutes. If you didn't watch the game, this is an example of our possessions the last 5 minutes.

No isolation for James on MSU's worst defender. No high/low down the stretch to get Johnson matched on Suton. No ball screen and float for GJ to get him isolated on Suton. Instead, it was Greg Davis-esque beat our heads against the wall refusal to adjust to Izzo's adjustments. Pathetic.

In the end, a good point guard could have mitigated our offensive set problems with an ability to create and manufacture points by driving and dishing or driving and drawing fouls. Avery Bradley can't get here soon enough.