New BCS Playoff Proposal: Much Ado About Nothing

Share All sharing options for: New BCS Playoff Proposal: Much Ado About Nothing

The concept has as much chance of getting a serious look from the BCS commissioners as there is of Augie Garrido hiring Huck as his hitting instructor.

The BCS will begin a new $500 million deal with ESPN in 2011. THE WWL negotiated the deal with the understanding that everything would remain as is.

Proponents of a playoff system continue to point to the short-sightedness of leaving lots of cash on the table, since CBS is shelling out $6 Billion for the NCAA Basketball Tournament.

March Madness does inject $545 Million into college basketball each year. ESPN will pay out $125 Million yearly begining in 2011 for the BCS contests.

But the problem for the Big Six BCS Conferences, (ACC, Big East, Big 10, Big 12, Pac 10, SEC) is that the NCAA owns March Madness lock, stock and basketball. The NCAA funds its operations out of that money (to the tune of 96% of its entire budget), and it also oversees the cutting of the financial pie into enough pieces to mollify all D-1 conferences.

The Big Six would love to have a playoff -- if they could figure out a way to keep the payout to all the other conferences down, and if they could keep the NCAA out of it.

This past season, the Big Six BCS Conference championship teams automatically qualified for a BCS bowl and its $18 Million payout. Utah was the lone non-BCS qualifier and collected its big paycheck for thumping Alabama in the Sugar Bowl. 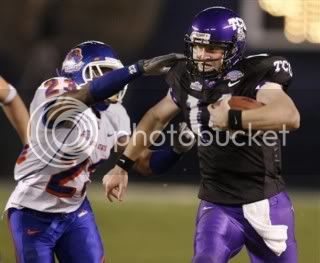 Poinsettia Bowl teams Boise State and TCU were both ranked higher than the two teams in the Orange Bowl last year.

WAC champ Boise State, ranked 9th in the BCS rankings, played 11th-rated TCU in the Poinsettia Bowl. The two teams each got $750,000 for playing. Both teams were ranked higher in the BCS standings than either Virginia Tech or Cincinnati, the two Orange Bowl participants, who collected their $18 Million for driving people away from the TV sets.

Keeping the NCAA -- and other non-BCS schools -- out of the potential pot of gold is the real holdup to a playoff. Right now the Big Six BCS Conferences get to decide who gets how much money, and they don't don't have to deal with the NCAA.