We still have yet to see the biggest BCS related match up of the weekend (Boise/VT), but that game is pretty clear cut as far as NC implications.

As I've said previously, I believe Boise can make a serious NC game run as an undefeated team if: a) teams from the big boy conferences (SEC, Big 10, Big XII, and ACC) all have at least one loss, b) VT puts together a solid 10-2 type of season after losing to the Broncos, c) Oregon State puts together an 8-4 type of season after losing to the Broncos (a win over TCU sure would have helped), and d) the WAC can win a few OOC match-ups to make the conference perceived as at least mediocre in the pecking order of leagues.

So the Boise/VT game is what it is.

I'm not going to let the game's unusual Monday night timing prevent us from taking a look at how the initial weekend went for the key conferences. There is no better way in these early days to assess what is happening than to look at how the out-of-conference battles are shaping up.

The Big XII posted a surprisingly solid 9-1 record in the initial weekend of action (this counts only FBS wins and all losses... so for instance, A&M's win over SFA is not included in the victory tally).

The SEC also delivered with an 8-2 mark. The bizarre irony is that both of these leagues sit atop the Week 1 conference standings despite the fact that they each suffered a major black eye, as Ole Miss and Kansas proceeded to embarrass themselves by losing outright to their FCS patsies.

The Big 10 was the only other conference to maintain a winning record.

The ACC posted only two games that qualified for our rankings, as the league played 10 games against FCS opponents (um, what the hell??) Maryland and VT still play games tomorrow.

The MAC and CUSA went completely winless, which may not be all that surprising. The Big East suffered an embarrassing 1-4 weekend, punctuated by Pitt's notable loss at Utah.

The Pac-10 also seems to be continuing its recent trend of slow starts, with a lackluster 3-4 record. 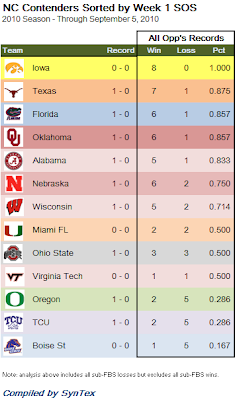 Now let's look at developments from an individual team perspective. One may think it's foolish to look at strength-of-schedule this early in the year, but these games that were just played, although early, still count in December. Just ask any Texas or Oklahoma fan in 2008, given the minuscule final margin between them, how important each week was in the scheme of things.

Looking at the win/loss records of all opponents on each teams schedule, Iowa again appears to have a great jump on the strength-of-schedule front, with eight of its future opponents winning their games, and zero losing. Texas, Florida and Oklahoma also saw fairly solid performances by their future opponents. While Oregon's absurd 72-0 victory drew a lot of attention, the Ducks have problems in the BCS computers looming given the pathetic 2-5 performance of their future opponents (obviously highly related to the Pac-10's weakness described above). And at the absolute bottom, as we would expect, we see TCU and Boise State's schedules have started quite poorly.

At this ridiculously early stage of the year, the season has a 2008 feel to it. The Big XII and SEC contenders can benefit greatly if their leagues continue the momentum. Keep an eye on Iowa.... if they can knock off Ohio State later in the year, they might create some noise in the BCS standings much like they did a year ago. I continue to believe TCU has remote odds to get into the NC picture barring absolute chaos (think 2007 where two loss teams are still contending for the NC).