Share All sharing options for: NFL Racks Up Record TV Ratings For Week 1

When negotiators for the NFL players and owners get together this off-season to work out a new contract, they need to be put in a locked in a room with nothing to read but the Nielsen ratings from this season. Looking at the massive TV numbers for their game might actually knock some sense into the heads on both sides.

The Sunday afternoon matchup of Green Bay vs. Philadelphia on Fox drew the largest week 1 audience ever for the Network. Over 28 million viewers tuned in to see the Packers 27-20 win over the Eagles. 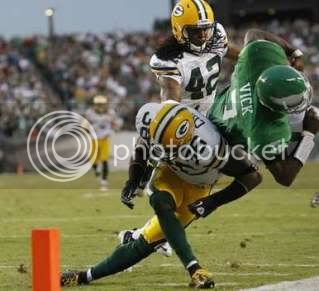 Green Bay's win over Mike Vick and the Eagles drew just less than 2 million viewers than tuned in to watch the BCS Championship game between Alabama and Texas.

Because of U.S. Open Tennis, CBS only had NFL football in the early afternoon window on Sunday. Still the New England Patriots win over Cincinnati drew over 15 million viewers.

NBC saw its Thursday-Sunday night NFL combo blow the doors off the ratings of past years. The Saints win over Minnesota on Thursday night had an 18 rating with 27.5 million viewers.

Then on Sunday night the Cowboys-Redskins game was another ratings winner.

Over 25 million viewers tuned in to watch Alex Barron hold former Longhorn Brian Orakpo on the last play of the game.

And when the two sides finally do start serious negotiations, TV ratings like this will be reason #1 why the owners will push for an 18-game regular season.