In the year of our lord two thousand and seven, I was presented with a dilemma.

For the 2004, 2005 and 2006 seasons, I had been diligently preparing BCS updates on Longhorn boards (2004 was by far the most interesting, for obvious reasons). But on September 29, 2007, I stood in the stands of DKR, drenched by a brutal rain storm, glaring at the unthinkable on the scoreboard: KSU 41, Texas 21. What a shitty day. The morning's tailgating had gone atrociously. My brother, seated to my right, was still visibly shaking from his rage unleashed about an hour before, when he had yelled, flailed, and nearly tore his own shirt off from frustration of seeing the Bobino/Derry/Killebrew trotted out series after series after series.

So having seen Texas completely piss away any shot of a national title, I began to think... this BCS stuff, why the hell should I even bother? I certainly didn't care anymore. And I knew no Longhorn fan really cared about the BCS, when the gravitational pull of San Diego and the Holiday Bowl can be felt thousands of miles and three months away.

I was a weak man. I should have stuck with it. Looking back in my archive of BCS musings, 2007 sits there as a gaping hole. I'm not proud of it.

So here we are again. And yes, if the analogy isn’t abundantly clear, to be perfectly blunt: Texas has pissed away any shot of a national title in 2010. I don’t think most Horn fans were expecting this season to pan out with an invite to Glendale for all the marbles, but I am pretty sure none of us expected a 22 point ass-kicking at the hands of a 1-2, middle of the road Pac10 team, either.

Anyhoo, for the love of the game, I’m going to try and stick with it as long as I can. Ultimately, I’d like to get more interest "nationally," meaning I would be very excited if Tide or Husker or Duck fans would ever want to take a look at what I might project on a given week. So if this is really the end goal, that means I need to bite the bullet and still post an update. Fight through it. Do it for the kids.

I really don’t expect many on BC to read this, and that’s perfectly cool, I understand. But again. It’s for the kids.

Luckily, on this difficult weekend there is little to say. The conferences, by and large, remain generally in their form from the prior week. The SEC went 3-0 in its limited OOC action. The Big XII went 5-1 (GEE… I WONDER WHO THE "1" IS??). The Big10 went 6-2 against a slate of MAC crap. The Pac10 went 2-1 with UCLA suddenly giving the league some unexpected credibility.

The WAC, however, did its best to snub Boise’s toe on the evening of its "big" (whatever) win against Oregon State, as the WAC went a lousy 2-6 on out-of-conference games. As a result, the WAC has fallen to the bottom half of the 11 FBS conferences, and their mediocre 0.360 winning percentage out of conference will be the albatross for Boise we’ve come to expect year by year.

The MWC went 4-1. Good for them. They are still not putting together anything near the impressive record they had in 2009, and ultimately, TCU is going to be held back greatly by the weakness of its league. 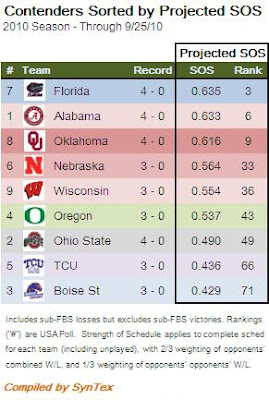 So other than licking our wounds as Longhorn fans, is there any broader national implications from the stunning Texas loss? Possibly. I think Nebraska (which saw its SOS fall from 25th to 33rd nationally) really could have used having an undefeated Longhorn team in Lincoln. Or at least one with a semblance of credibility. So although the Huskers may have really enjoyed the ass-kicking in Austin, the more intelligent (or at least those that try to see the big picture) already know this doesn’t help Nebraska if they are having to compete against an undefeated Ohio State in December.

OU is in prime position as well, but I can say with some conviction that they also have shown multiple red flags on the field as the season has progressed. So the notion of the Sooners winning out seems a little.... um.... out there right now. I guess crazier things have happened.

Florida and Alabama have the best position (as usual) to get to Glendale, and that probably includes getting there as a one loss team. S-E-C! S-E-C!

TCU and Boise are simply not getting enough help from their leagues to make NC runs. Boise’s schedule is too weak, and the VT victory remains tainted by JMU. And TCU suffers from a ceiling known as Boise State – they seem unlikely to jump Boise at any point. After all, TCU got hurt indirectly by Boise beating their best quality opponent (Oregon State). TCU also suffers from the voter perception that Boise beat TCU head-to-head on a neutral field less than 12 months ago. Yes, that was a different season, but many of the players returned for both teams involved. You and I both know plenty of voters will keep that in the back of their minds.

Bottom Line: The horrific Longhorn loss is a major demerit for the BigXII. Along with other BigXII teams struggling mightily (OU vs. Cincy, USU and AF, A&M vs. FIU, etc.), I think the perception of the BigXII is hurting despite the numbers suggesting it is the second strongest league. My thesis from last week that Ohio State may get leapfrogged by a solid BigXII team no longer seems true. The SEC champ and Ohio State "controlling their destiny" at this point, with the Ducks and Huskers/Sooners waiting in the wings. Boise/TCU remain long-shots.