UT Sevens Rugby Smacks OU Around and Then Even Wins Another

Share All sharing options for: UT Sevens Rugby Smacks OU Around and Then Even Wins Another

I am no sports writer but that's mostly just because I know very little about sports and I can barely write.

However Rugby I do appreciate, and so when I got a call from Sailor Ripley at Barking Carnival headquarters asking if I'd run out to Philly and cover the Texas rugby at the Collegiate Championship Invitational -- that's right: an invitational that is somehow also a championship -- well, as William Shatner said, "What else could I do? I said, 'I'll see what I can do.'"

If you don't know -- if you've been living under a rock or in the United States for most of your life -- sevens rugby is seven-on-seven rugby played for two seven-minute halves. It's a big field for seven guys to cover. It's a running and tackling game, and it's fast. And since a whole match takes less than twenty minutes, a typical tournament day will see around 25 matches played in one stadium. The world has been playing international sevens rugby for many years, and the US has fielded a team for most tournaments. We even host an annual international tournament in February in Las Vegas, with sixteen countries showing up earlier this year. Collegiate sevens rugby national championship play is just getting going.

I did it the right way. I made the little brother drive us down to Philly, because he drives a convertible Porsche and also because he went to OU and is friends with the coaching staff there. That connection got us VIP suite access which meant constantly flowing free beer and food but which also meant I was given an OU jersey to wear for the entire first day. So your humble correspondent was to be bringing you news of your favorite team from inside the jersey of one of your lesser favorites. But not before a few evening drinks at the bar at the hotel where all the teams were staying. And where the Texas coach was holding court. Here's some reconnaissance: he has an Oklahoma symbol tattooed on his leg. Not the OU logo, but the shield-and-peace-pipe thing that's on the state flag. Making me think maybe he ain't a native Texican.

This tournament was covered by NBC. Some of the matches even aired live. A lot of the initial parings and poolings seemed suspiciously non-random, probably for that very reason: OU-Texas; Army-Navy. Here's how it went down for the Texas boys:

Texas-OU first off. Pretty even to start. Tied at seven apiece at halftime. But then in the second half OU got... tired, I guess. They looked flat. Texas ran away with the match 24-12. After a short five-match break Texas was back out on the pitch facing Temple and making short work of them 19-0.

Then came Arizona. If you'd asked me right before this match, "Hey, you in the OU jersey, do you think Texas can beat Arizona?" I'd have said no. And not because, as you would have assumed, I was an OU fan and therefore wished the worst for Texas, but because Arizona looked great. In fact, I might have told you at that time that I reconed Arizona or Cal would win the whole thing. Texas played them tough until about fifteen seconds to go in the first half, when Arizona scored and converted the first try and then scored another on a breakaway to the corner. 12-0 Arizona at half, 19-0 final. If it helps at all, Arizona had beaten OU 38-0 only three matches before, on live TV.

Two solid wins on day one, not bad. Texas played well that day, and the Dropkick Murphys played well after the matches wrapped up. The wayward youth of Philly, however, just wanted to fight.

Day two for Texas began with Army. Texas was first to score, only a minute and a half into the match, up 7-0. Army answered back immediately. The one-really-big-guy-the-whole-length-of-the-field kind of answer. 7-7 after less than four minutes. Pretty even for the next three minutes but Army got one final chance after the buzzer. Texas held them off.

Second half started with two solid minutes of continuous play before Army finally broke away for a try right in the middle, easily converted. 14-7 Army with four and a half minutes to go. Texas was looking to return the favor but was stopped by a bullshit forward pass call resulting in a scrum down to Army in their own end. Another break-away try for Army right in the center but somehow missed the conversion. 19-7 Army with a minute and a half to go. Beautiful pop-kick by Texas chased down but knocked forward instead of caught resulted in a penalty to Army. Texas stole the ball back, ran well, another pop kick up in the air at the buzzer this time caught by Army and kicked out of bounds to win the match.

Army went on to win the whole tournament. Texas looked pretty good. It's awesome to see this sport getting traction at the university level and I'm not going to be discouraged that I can't find any video highlights on nbc.com. 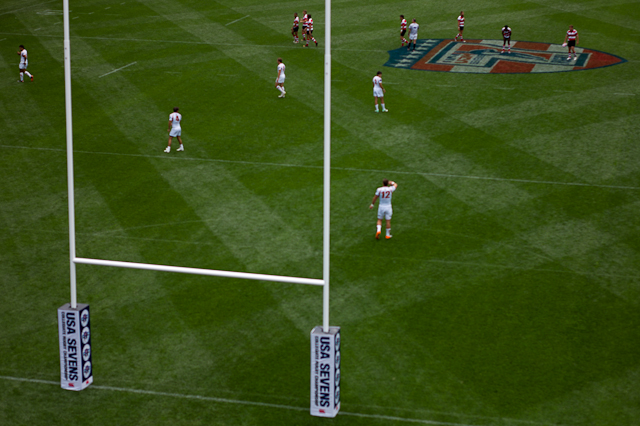